The forex markets are staying in consolidative mode today. Sterling rises notably as some Brexiteers are finally agreeing that Prime Minister Theresa May’s deal is better than no Brexit. At least, there is a chance for future governments to adjust the relationship with EU further. But in any case, traders will likely stay cautious ahead of tomorrow’s vote on Brexit alternatives. Following the Pound, Australian Dollar is the second strongest, followed by Dollar.

Meanwhile, CAC leads European stocks higher as Airbus secured a giant deal with China during President Xi Jinping’s EU visit. But after all, major pairs and crosses are bounded in familiar range. Yen is the weakest one for today as risk sentiments improved. Euro’s is surprisingly the second weakest, followed by Swiss Franc.

Technically, there is no clear sign of break out in most pairs yet. Though, EUR/USD is rejected by 4 hour 55 EMA as yesterday’s recovery lost stem. Immediate focus is back on 1.1273 temporary low and break will extend the fall from 1.1448 to 1.1176 low. WTI crude oil is back above 60 and focus will be on last week’s high at 60.36. Break will resume medium term up trend.

Chicago Fed President Charles Evans said today that Fed will monitor the slowdown in China and Europe to determine any policy actions. And, “it depends a lot on how large the slowdown would be in China, and how big the headwinds would be from European deceleration as well”.

Evans also referred to what happened in the past few years on monetary policy. “We were about ready to start raising rates then additional uncertainty pushed us off until December 2015,” he said. “And then the uncertainty of 2016 made us wait again until end of 2016.”

In the same event in Hong Kong, Boston Fed President Eric Rosengren said policymakers are “really focused on domestic economic conditions generally in the United States,” but “to the extent that it does affect the United States, we fully take that into account.”

Conservative MP Michael Fabricant echoed as that it’s the “dreadful conclusion” he came to too. And “a new PM can then negotiate a better and more distanced relationship with the EU after Brexit. (Of course this is the least worst option but the only practical way forward for now.)” Fabricant also said: “The practical alternatives are far worse that the Withdrawal Agreement including keeping us in the Customs Union and Single Market indefinitely so no control of immigration or having to obey EU directives.”

Yesterday, the UK Parliament seized control over Brexit from the government after passing a cross-party amendment by 329 to 302. It gives MPs a series of votes on alternatives to Prime Minister Theresa May’s Brexit deal, including a second referendum, staying the the customs union, no-deal and even revoking article 50. The votes will be carried out on Wednesday.

Chinese President Xi-Jingping met European leaders in Pair today, including European Commission President Jean-Claude Juncker, German Chancellor Angela Merkel, and the host French President Emmanuel Macron. Xi said that cooperation is the mainstream in China-Europe relations, and even if there are differences and competition, it is benign competition.

Juncker called for China to open up the markets for the EU. He urged clearer reciprocity so that “European businesses could have the same degree of access to the Chinese market as Chinese businesses have in Europe.” Macron said: “We would like to make progress renovating multilateralism. We have divergences, obviously in the history of humanity power does not go without rivalry, none of us are naive,” Macron added “But we respect China and are determined to have dialogue and cooperation.”

Also, during the trip, China announced to purchase EUR 30B in air jets from Airbus. The giant deal include 290 A320-series narrow-body planes and 10 A350 wide-bodies. The A320 is the chief global rival of Boeing’s 737 Max and the latter just had two fatal crashes in five months.

German Gfk consumer sentiment for April, dropped slightly to 10.4, down from 10.7 and missed expectation of 10.8. Gfk noted that consumer mood looks “somewhat more balanced” than in previous months. And more importantly, decline in economic expectation halted, “at least temporarily. The index rose 7 pts to 11.2 even though it’s way off last year’s 45.9.

Consumers are “certainly not assuming that Germany will fall into recession this year”, just a “noticeable cooling off of economic activity”. Gfk k added that this is due to the so called “Five Sages” have lowered lowered their original growth forecast for this year from 1.7 to just 0.8 percent.

Also, the downturn is more due to foreign than domestic economic factors, including the “lack of decisiveness” regarding Brexit data and nature, as well as US-EU trade conflicts.

Kozo Yamamoto, a senior ruling LDP lawmaker and a key architect of Abenomics, complained that BoJ made a mistake in 2016 to change its policy to target interest rate under than yield curve control, instead of the pace of monetary base expansion. He said BoJ “ought to buy government bonds more aggressively”. But it’s difficult under the current YCC.

Also, Yamamoto said he opposes the plan sales tax hike in October and discussed with Prime Minister Shinzo Abe. But he cannot convince Abe to put off the twice-delayed sales tax hike. He said, “the prime minister told me while I may be theoretically right, it was politically difficult”.

In the summary of opinions at the March 14/15 monetary policy meeting, BoJ noted that “while uncertainties regarding overseas economies started to become apparent from around last autumn, slowdowns have materialized.”. And, “reflecting these developments, downside risks to Japan’s economy clearly have been heightening recently.”

Also, it is concerning that developments toward an economic downturn could heighten, depending on developments in overseas economies and the effects of the scheduled consumption tax hike.

On monetary policy, BoJ maintained that it should “persistently continue with the current monetary policy stance”. But it also emphasized that “in case developments in economic activity and prices undergo a phase shift, it is important to make preemptive policy responses.”

Looking ahead, UK will release BBA mortgage approvals in European session. US will release housing starts and building permits, house price indices later in the day. But most attention will likely be on consumer confidence. 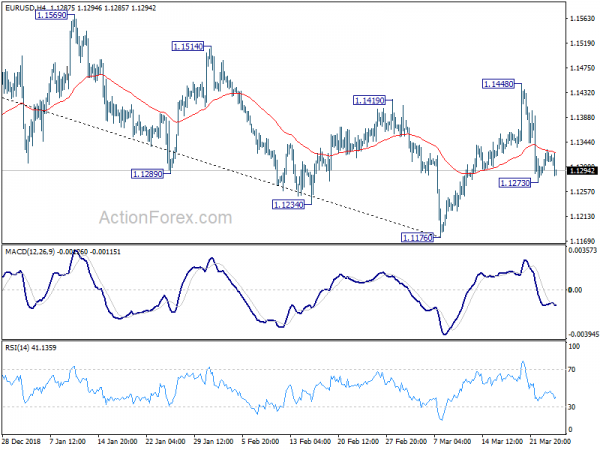 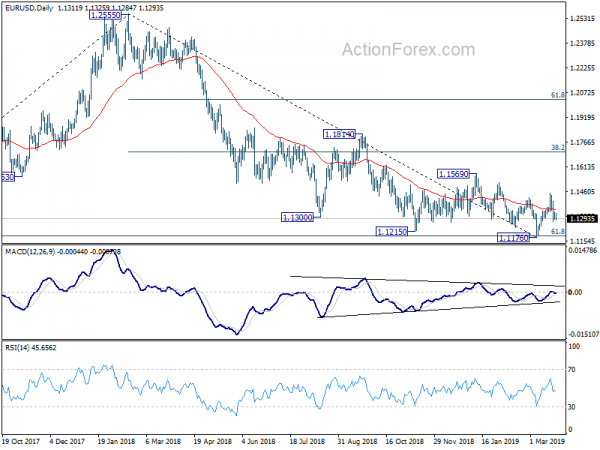