Dollar jumps broadly in early US session after very strong retail sales and jobless claims. Yen is the only one stronger than the greenback, thanks to pull back in global treasury yields. Euro, as well as benchmark German yield tumble as poor PMIs dent hope for a recovery in Q2. New Zealand Dollar is the only weaker one for today. Despite strong Canadian retail sales and Australian Employment, both are among the weakest ones. For the week, Yen is now the strongest one, followed by Dollar and then Aussie. Kiwi is the weakest one, followed by Swiss Franc and then Euro.

Philadelphia Fed Manufacturing Business Outlook, however, dropped to 8.5, down from 13.7 and missed expectation of 11.0.

Chris Williamson, Chief Business Economist at IHS Markit said: “The eurozone economy started the second quarter on a disappointing footing, with the flash PMI falling to one of the lowest levels seen since 2014. The data add to worries that the economy has failed to rebound with any conviction from one-off factors that dampened activity late last year, and continues to show only very modest growth in the face of headwinds from slower global demand growth and subdued economic sentiment.”

Alan Oster, NAB Group Chief Economist noted that easing of business conditions continued through 2018 into 2019. And they’re only “just above average”. Together with “negative conditions and forwards orders”, they suggest outlook “remains weak”. And the easing in conditions has been “broad based across most industries and all states”, in particular retail.

Oster also said: “For now, we will wait and see how leading indicators of the labour market evolve, though we think it is likely the RBA will act to cut the cash rate and bolster the economy should the labour market deteriorate on the back of weaker activity data”.

Japan PMI manufacturing improved to 49.5, remained stuck in its rut

Japan PMI manufacturing rose to 49.5 in April, up from 49.2 and beat expectation of 49.4. Nevertheless, it’s still the third straight month of sub-50 reading. Markit pointed out that weaker demand from domestic and international markets persists, leading output to fall further. But manufacturing employment remains resilient.

Joe Hayes, Economist at IHS Markit said: “Japan’s manufacturing sector remained stuck in its rut at the start of Q2, with the factors which have prohibited any growth such as US-Sino relations, growth fears in China and the turn in the global trade cycle, all remaining prominent risks. Export orders dipped at a stronger rate in April, domestic demand for goods was similarly weak and firms cut their stocks and scaled back production. Yet again, the service sector will need to pick up any slack to help keep Japan’s economy afloat.” 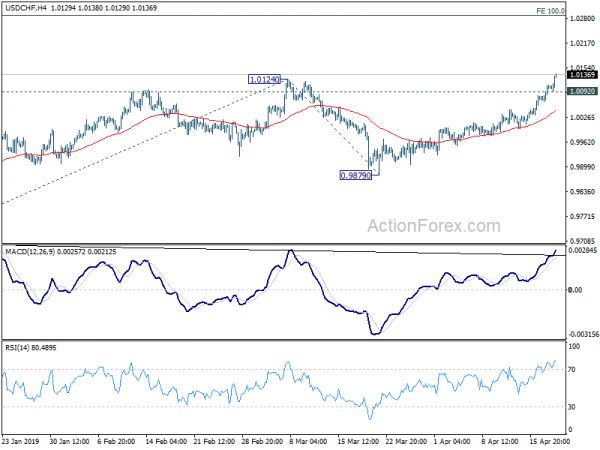 In the bigger picture, medium term up trend from 0.9186 is resuming. Current rise should now target 1.0342 resistance next. For now, we’d be cautious on strong resistance from there to limit upside, until we see medium term upside acceleration. On the downside, break of 0.9879 support is needed to indicate reversal. Otherwise, outlook will stay bullish in case of deep pull back. 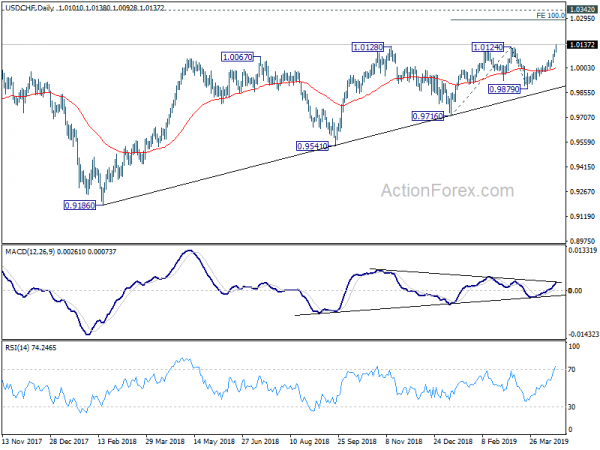