Markets are back in risk averse mode in Asian session, with heavy selloff see in Chinese stocks and Yuan. Some noted that the gulf between US and China in trade talks have widened since last week’s development. But the “gulf” has always been there. The negotiations just reached a point that both sides have to admit the differences in principles. New tariffs had took effect and more are coming. Trade war is going to drag on with no end in sight.

In the currency markets, Australian Dollar opens the weak as the weakest one, followed by New Zealand Dollar. Canadian Dollar quickly pared back last week’s employment data inspired gains and turned into the third weakest. Yen and Swiss Franc are naturally the strongest ones for today so far. Sterling is the third but it’s just paring some of last week’s losses. There is no turnaround seen in the Pound yet.

Technically, USD/JPY, EUR/JPY and GBP/JPY are staying in consolidations above last week’s temporary lows. For now, such consolidations are expected to be brief and we’d expect more downside ahead, maybe rather soon. GBP/USD will look at last week’s low at 1.2967. Break will put 1.2865 support into focus and break there will confirm bearish reversal. AUD/USD continues to look at 0.6962 temporary low and break will confirm decline resumption. EUR/USD, USD/CHF and USD/CAD are staying an consolidations. We’d continue to favor upside breakout in Dollar in these three pairs.

Last week’s US-China negotiations ended with practically no progress, but just confirmation that the tariff war will drag on. New round of tariffs already took effect on Friday and paperwork for tariffs on USD 325B in Chinese goods has started. For now, no new round of talks is scheduled. China’s retaliations are awaited and could be announced any time soon.

Chines Vice Premier Liu He told reporters on Friday that the “negotiations have not broken down”. He also tried to talked down the situation and said mall setbacks are normal and inevitable during the negotiations of both countries. Looking forward, we are still cautiously optimistic” . Yet, he added that “right now, both sides have reached mutual understanding in many things, but frankly speaking, there are also differences.”

Liu emphasized “differences are significant issues of principle,” and “we absolutely cannot make concessions on such issues of principle.” One of the issues is over the current tariffs. Liu told Phoenix television in Hong Kong that if both sides wanted to reach an agreement, then all tariffs must be eliminated. Also, both sides have different opinions on the volume of additional purchase of US goods from China. As noted by a commentary by state news agency Xinhua, any purchases should be “in line with reality”.

The biggest issue, though, is likely on the text regarding law changes regarding core issues like IP theft, which China sees as intrusion of sovereignty. Liu said that “every nation has its dignity, so the text ought to be balanced.” the People’s Daily, China’s propaganda media, echoed on Monday. It said that “at no time will China forfeit the country’s respect, and no one should expect China to swallow bitter fruit that harms its core interests.” This, indicates that China is in no position to back down.

Trump continued to be hard line on China, warned of tougher deal ahead

Trump sounded hard line on China with a series of tweets. He said China was “beaten so badly” in recent negotiations and they may as well “wait around for next election” to see if they can “get lucky and have a Democratic win”. He said “the only problem is that they know I am going to win… and the deal will become far worse for them if it has to be negotiated in my second term. Would be wise for them to act now, but love collecting BIG TARIFFS!”. Later, he reiterated and said “China is DREAMING that Sleepy Joe Biden, or any of the others, gets elected in 2020. They LOVE ripping off America!”

He also indicated no intention to back down as he “loved tariffs”. He said the US is “right where we want to be with China”. And he criticized again that China “broke the deal with us & tried to renegotiate”. And the US is taking in “Tens of Billions of Dollars in Tariffs”. He reiterated that the tariffs collected could be spend on “Great Patriot Farmers” and “distribute the food to starving people” in other nations.

WH Kudlow: No appreciable impact on economy from new tariffs on China

On the impact of the tariffs that took effect last week, Kudlow said “the economic consequences are so small” as the US economy is “in terrific shape”. He estimated US might only lose 0.2% of GDP. And, “this is a risk we should and can take without damaging our economy in any appreciable way.

On more tariffs on currently untaxed USD 300B in Chinese imports, Trade Representative Robert Lighthizer said the details would be released on Monday. But Kudlow said it could probably be “months” before they take effect.

Meanwhile, he added that talks are on-going. And, there is a G-20 meeting in Japan toward the end of June next month and the chances that President Trump and President Xi will get together at that meeting are pretty good.”

Focus turns back to economic data from US, Germany, UK, Canada, Australia and China

It’s clear that there is no quick fix to US-China trade tensions. Attentions will turn back to economic data this week. There are something important for many major currencies. For US, main focus will be on retail sales. The US economy has been performing rather well, except inflation. Retail sales will likely provide another piece of evidence of underlying robustness of the economy, and its preparedness for prolonged trade war with China.

German ZEW economic sentiment will be watched for more sign of stabilization in Eurozone slowdown. UK will release job data but might be shrugged off like others as Brexit remains the key risk. After last week’s record job data, Canada CPI will probably provide more support for BoC to turn its rate path back on track. RBA is clear that employment is now the key factor for the next rate move. This will feature Australian wage price index and employment.

April data of China were so far disappointing. The seasonal recovery in March could just be false dawn. This week’s batch of data including fixed asset investment, industrial production and retail sales will be watched closely. Renewed weakness will raise doubt on whether China could endure full-blown trade war with US.

AUD/USD weakens today but stays above 0.6962 temporary low. Intraday bias remains neutral first and some more consolidations could be seen. In case of another recovery, upside should be limited by 0.7069 resistance to bring fall resumption. On the downside, break of 0.6962 will resume the fall from 0.7295 to 100% projection of 0.7295 to 0.7003 from 0.7205 at 0.6913. Decisive break there will indicate further downside acceleration and pave the way to retest 0.6722 low. However, considering bullish convergence condition in 4 hour MACD, firm break of 0.7069 will indicate near term bottoming and turn bias back to the upside for 0.7205 resistance and above. 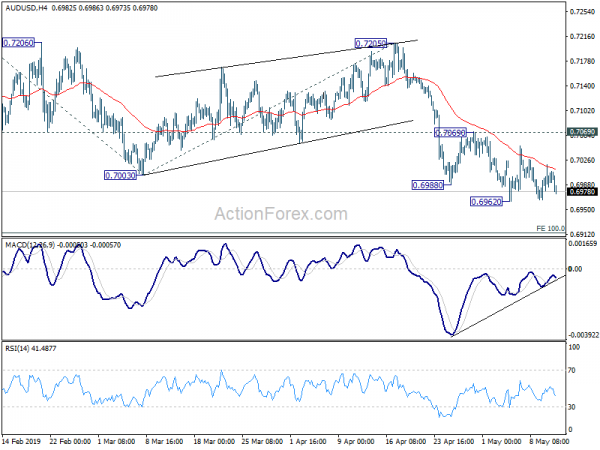 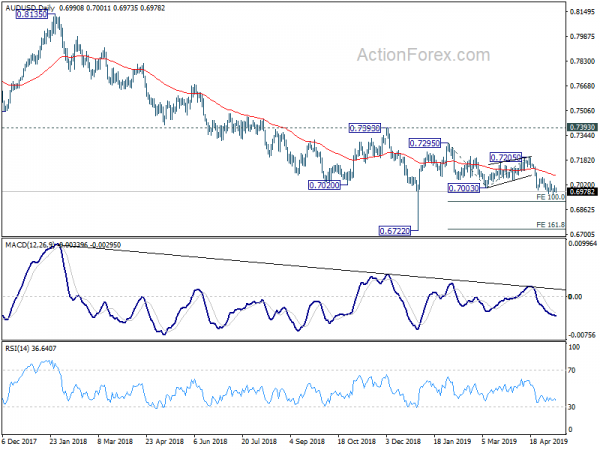