Markets sentiments generally stabilized today as it seems that US and China are still will to continue trade negotiations. Nevertheless, otherwise some pleasing words, there is nothing concrete, not even a scheduled meeting. Further decline in German 10-year yield, deeper into negative territory, is a sign of nervousness among investors. Gold is also holding firm around 1300 handle, as another sign of underlying risk aversion.

Some important economic data are released today but they’re largely ignored. UK unemployment dropped to fresh 44-year low of 3.8% in March. Eurozone industrial production contracted -0.3% in March. German ZEW economic sentiment deteriorated to -2.1 in May. But these data triggered little movements in the markets.

Technically, recovery in Yen crosses are rather weak. Focus will be on temporary lows of 109.02, and 122.48 in USD/JPY and EUR/JPY respectively. We’d expect Yen crosses to resume decline, probably rather soon. AUD/USD continues to gyrate lower to 0.6913 fibonacci projection level. Firm break there could trigger downside acceleration. With today’s weakness, GBP/USD might be heading to 1.2865 key support. Firm break will confirm near term bearish reversal.

China agreed to continue trade negotiation with US, but warned of underestimating its determination

China indicated that it has agreed to continue negotiation with the US even though both sides have raised tariffs on either other imports. Chinese Foreign Ministry spokesman Geng Shuang said in a regular press briefing “my understanding is that China and the United States have agreed to continue pursuing relevant discussions.” But no detail was given on the way forward. Geng just said “as for how they are pursued, I think that hinges upon further consultations between the two sides.”

Additionally, Geng warned “we hope that the U.S. side does not misjudge the situation and not underestimate China’s determination and will to safeguard its interests.” China also typically denied any accusation of their wrong doings. Geng said “you absolutely can’t put the hat on China of reversing positions and going back on one’s promises.”

Trump: Have to make up the tremendous ground since ridiculous one sided formation of the WTO

Trump fired a series of tweets boasting his own tariff policies again. He noted there is now a “big a growing” steel industry after the 25% tariffs. He also blamed that there were “tremendous ground”  lost to China  since the “ridiculous one sided formation of the WTO”. He also claimed that it’s time for the farmers as “one of the biggest beneficiaries of what is happening now.” The country will make up for the differences if China doesn’t continue to buy from them.

In prepared remarks, New York Fed President John Williams said the global shifts in demographics and productivity have two important implications for the economy and monetary policy. Firstly, “slower population and productivity growth translate directly into slower trend economic growth”. Secondly, “these trends have contributed to dramatic declines in the longer-term normal or ‘neutral’ real rate of interest, or r-star.”

And, the global decline in r-star will continue to pose “significant challenges” for monetary policy. There will be “limited policy space” for rate cuts in future downturns. Hence, “recoveries will be slow and inflation below target”. Also, the limitation in the ability of central banks to offset downturns results in an “adverse feedback loop”. That is “expectations of low future inflation drag down current inflation and further reduce available policy space”.

Separately, Williams told Bloomberg TV that “as tariffs get larger, assuming that happens, the effects will be bigger, boosting inflation in the next year and probably having negative effects on growth.” “We could probably get a couple tenths or two tenths on the inflation rate over the next year based on what has already been announced. If there (is) further escalation in terms of tariffs, those effects would get even larger”, he added.

German ZEW dropped to -2.1, restrained economic growth for the next six months

ZEW noted that “The development of production and exports in Germany as well as Eurostat’s most recent flash estimate of GDP growth in the euro area in the first quarter of 2019 give rise to the hope that the German economy, too, has grown more strongly than expected in the first quarter. ”

ZEW President Achim Wambach said: “The decline in the ZEW Indicator of Economic Sentiment shows that the financial market experts continue to expect restrained economic growth in Germany for the next six months. The most recent escalation in the trade dispute between the USA and China again increases the uncertainty regarding German exports – a key factor for the growth of the gross domestic product”.

Looking at the details, business conditions, confidence and forwards orders are all below average. More worryingly, there was sharp decline in employment index from 6 to -1, first below average reading since late 2016. By industry, largest fall in employment occurred in retail, manufacturing an wholesale. But overall deterioration was rather broad-based.

Alan Oster, NAB Group Chief Economist noted: “We will continue to watch the employment index as well as the other forward looking variables over coming months for further slowing. In particular, the readings of labour market related variables will remain important as, for now, the interest rate outlook appears to hinge on continuing strength in the labour market”. 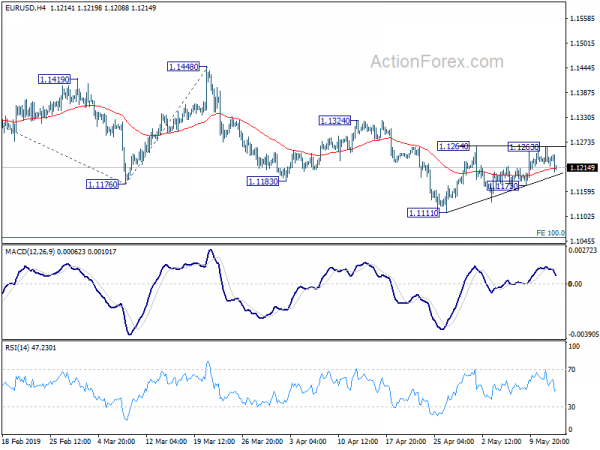 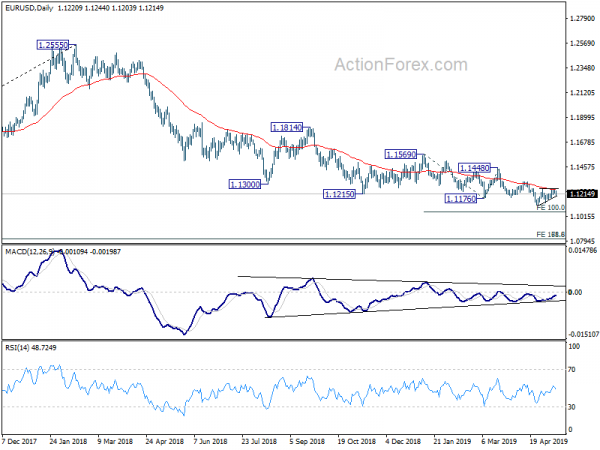 Euro-Zone’s Economic Confidence Improved In May