Sterling suffers heavy selling today as after Brexit negotiations between the UK government and opposition Labour formally collapsed. More uncertainties lie ahead as Prime Minister Theresa May will lay our the time line for stepping down, whether her Brexit deal would be approved by the Commons in June or not.

On the other hand, sentiments are also weighed down by China’s hard stance on trade negotiations with the US. China seems rather uninterested to resume the talks, unless three core issues are resolved, including eliminating all tariffs, the amount of additional purchases and texts of the agreement. It’s also part of the reason that’s weighing on Chinese, European and US stocks, as well as treasury yields.

UK opposition leader Jeremy Corbyn formally announced collapse of Brexit negotiation with the government. In a letter to Prime Minister Theresa May, Corbyn said the talks had “gone as far as they can”.

And, “it has become clear that, while there are some areas where compromise has been possible, we have been unable to bridge important policy gaps between us…. Even more crucially, the increasing weakness and instability of your government means there cannot be confidence in securing whatever might be agreed between us.”

May would now bring the Brexit Withdrawal Agreement back to the Commons in the first week of June. But there is practically no chance of getting it approved. Most importantly, regardless of the outcome of the vote, May agreed hammer out her the time line to step down with 1922 Committee chairman Graham Brady.

For EU28, CPI was finalized at 1.9% yoy, up from 1.6% in March. The lowest annual rates were registered in Croatia (0.8%), Denmark and Portugal (both 0.9%). The highest annual rates were recorded in Romania (4.4%) and Hungary (3.9%). Compared with March 2019, annual inflation fell in six Member States, remained stable in two and rose in nineteen.

BoJ Governor Haruhiko Kuroda reiterated the central bank’s forward guidance that “there’s a good chance current low interest rates will be maintained beyond (the spring of 2020) depending on future developments”. In a speech he emphasized “when we say we will keep rates low for an extended period of time, we mean it will be maintained for quite a long time.”

On the economy, Kuroda expects it to continue to expand moderately. Though, “if overseas growth takes longer than expected to pick up, Japanese companies – manufacturers in particular – could become cautious about spending on capital expenditure”.

While the economy is facing some risks, Kuroda dismissed that the so called “Modern Monetary Theory” as being a “wrong idea”. He said “when a central bank monetizes debt unlimitedly, it will most certainly trigger hyper-inflation and cause huge damage to the economy.” And, “it’s a common understanding among central banks of advanced economies that they ought not monetize debt.

BusinessNZ’s executive director for manufacturing Catherine Beard said that while the improvement in activity for April was welcome, the underlying trend still remains a concern. She noted “Although this indicates the sector is still in expansion mode, the unadjusted series has tended to trend down since late 2017.  If this trend continues, it will eventually have negative consequences for the main published result”.

BNZ Senior Economist, Doug Steel said that “the headline PMI looks reasonable but some of the details have cooled off including new orders. It raises questions for those looking for a strong growth pickup later in 2019”.

Separately, Bloomberg reported that China is not very keen in resuming trade negotiations with US, quoting a mysterious blog Taoran Notes). The blog is believed to be backed by the government and is one of the few voices on China’s negotiations strategy in a censored internet world in the country. The blog piece noted: “We can’t see the U.S. has any substantial sincerity in pushing forward the talks. Rather, it is expanding extreme pressure… If the U.S. ignores the will of the Chinese people, then it probably won’t get an effective response from the Chinese side,” it added.

GBP/USD drops to as low as 1.2736 so far today and intraday bias remains on the downside. Current decline from 1.3381 should target retesting 1.2391 low. On the upside, above 1.28.08 minor resistance will turn intraday bias neutral for consolidation first. But recovery should be limited well below 1.3176 resistance to bring fall resumption. 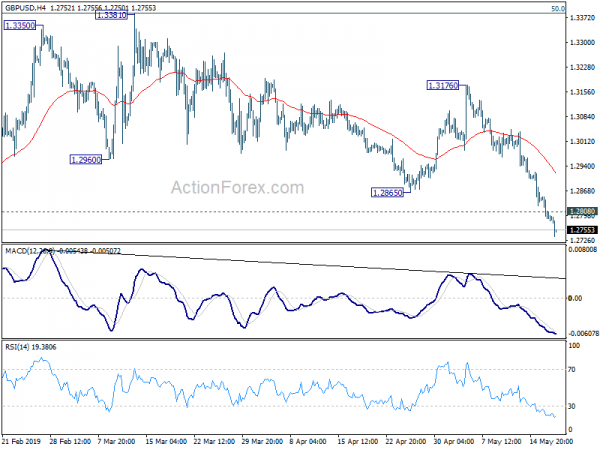 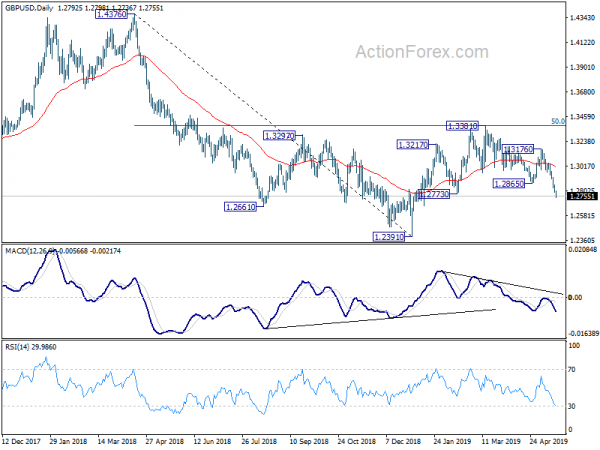