Technically, AUD/USD should have formed a temporary low at 0.6864. Some consolidations might be seen but there is no indication of bullish reversal yet. Similarly, EUR/AUD has formed a temporary top at 1.6262 but outlook will stay bullish as long as 1.5959 resistance turned support holds. EUR/USD is extending the decline from 1.1263 and might be heading to retest 1.1111 low. GBP/USD’s fall is also in progress on Brexit uncertainty.

Japan’s economy showed surprising resilience even though there were speculations of contractions. Q1 GDP grew 0.5% qoq versus expectations -0.1% qoq. Annualized, GDP grew 2.1%. However, the details are rather weak indeed. Consumer spending dropped -0.1% qoq. Business spending also dropped -0.3% qoq. Exports also had the biggest contraction since 2015. The figures argue that Japan might be entering into a mild recession

Though, the government will watch the impact of trade tensions carefully. Exports are already slowing, and output remains weak due to China’s economic slowdown. Some manufacturers are also delaying capital spending, leading to decline in capital expenditure.

It’s reported, without confirmation yet, US Trade Representative Robert Lighthizer will travel to Japan on May 24. He will meet Japanese Economy Minister Toshimitsu Motegi to resume trade negotiations. Trump declared auto-imports as threat to national security last week. And Lighthizer will have 180 days to complete the trade agreement. Otherwise, Trump might start imposing tariffs on autos and parts from Japan.

The claim of auto imports as national security threat to US infuriated Japanese maker Toyota Motor.  Toyota said in a statement that Trump’s proclamation “sends a message to Toyota that our investments are not welcomed, and the contributions from each of our employees across America are not valued.”

Toyota added “our operations and employees contribute significantly to the American way of life, the U.S. economy and are not a national security threat”. Toyota added that “history has shown” that limiting imports is “counterproductive in creating jobs, stimulating the economy and influencing consumer buying habits.” “If import quotas are imposed, the biggest losers will be consumers who will pay more and have fewer vehicle choices.”

Trump revealed that he has been pushing for an unfair trade deal with China, before the negotiations collapsed. In an interview with Fox News Channel aired on Sunday, Trump said he told Xi the agreement “can’t be like a 50/50 deal”. And, ” you are so far ahead from presidents that allowed you to get away. This can’t be a 50/50 deal.”

He further claimed: “We had a very strong deal. We had a good deal, and at the end, they changed it. And I said, that’s OK, we’re going to tariff their products”. And, “it hurts China so badly.”

Trump also talked about his subsidy plan to farmers. He noted conversations with farmers as they said “Sir, we don’t want a subsidy. We just want a level playing field. And we also know that we’re being killed by these countries — by many of the countries, not just China.”

Some central bank activities will be closely watched. RBA minutes will be scrutinized for hints on rate cuts in the second half of the year. BoE inflation report hearing will be important. Yet, the key for Sterling’s outlook is in Brexit. Hence, the hearing might be a non-event. FOMC minutes will catch a lot of attention. Fed Chair Jerome Powell talked down the chance of a rate cut after last meeting. Recent comments from Fed officials also suggest that there is no case for a cut yet. But they came before escalation of trade war with China. ECB minutes will also be featured but the central bank has been rather clear in its communications. So, we’re not expecting something ground breaking.

O the data front, Eurozone PMIs and German Ifo could be the most market moving. Euro would be vulnerable if PMIs suggest that the worst in slowdown is not over. Canadian Dollar will look into retail sales for the needed commitment from traders for a breakout. UK CPI and retail sales, New Zealand trade balance and US durable goods orders will also be watched closely. 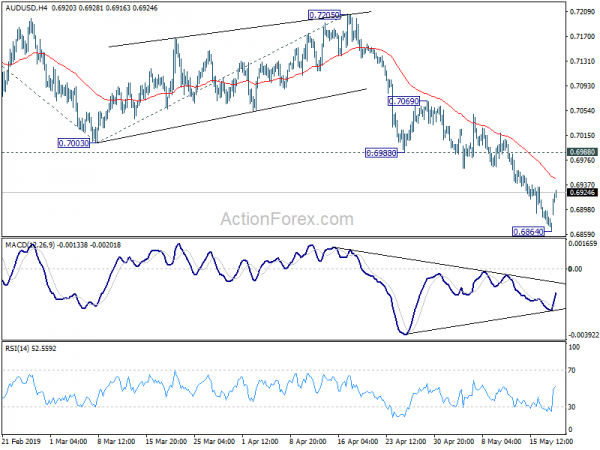 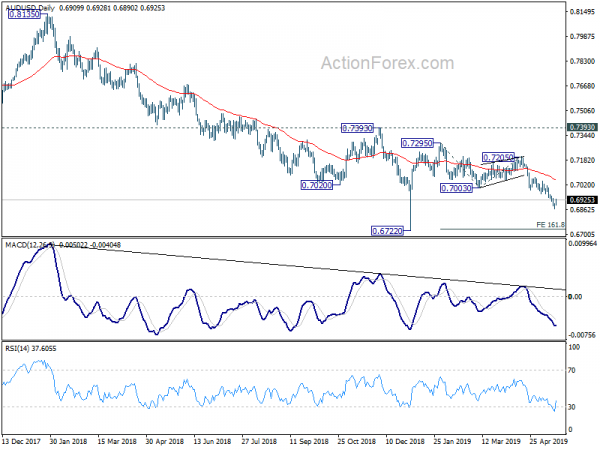