US-China trade war remains a dominant theme in the global financial markets today. Words from both sides continued to indicate hard line stances. It doesn’t quite matter how much close to facts are their rhetorics. What matters most is that neither the US or China is going to back down for now. More importantly, after Trump’s double efforts to isolate Huawei, global tech companies are starting to halt supplies to the Chinese telecom giant. Those companies include Intel, Qualcomm, Broadcom, Germany’s Infineon. And, even Google is said to halt support on its Android platform. US-China tension will only get worse.

Nevertheless, while risk aversion is seen in Europeans stocks while US futures point to lower open, the currency markets shrug it off. Australian Dollar remains the strongest one for now, as lifted by election results over the weekend. New Zealand and Canadian Dollars follow as next strongest. There is no apparent strength in Yen for today. Instead, Dollar, Euro and Yen are so far the weakest.

Technically, while Yen is mildly lower today, there is now sign of bottoming in Yen crosses yet. We’d still expect more decline in USD/JPY, EUR/JPY and GBP/JPY ahead. 109.02 in USD/JPY, 122.08 in EUR/JPY and 139.54 in GBP/JPY will be watched for declines resumption. Sterling also looks generally weak too on revival of no-deal Brexit. GBP/USD is staying in near term decline, and EUR/GBP is staying in near term rally.

China hit back on Trump’s claim that there was “very strong deal”, a “good deal” that the formed changed, leading to higher tariffs on Chinese imports. Foreign Ministry spokesman Lu Kang said: “We don’t know what this agreement is the United States is talking about. Perhaps the United States has an agreement they all along had extravagant expectations for, but it’s certainly not a so-called agreement that China agreed to.”

Lu also criticized that the US tried to “achieve unreasonable interests through extreme pressure”. And, “from the start this wouldn’t work.”He also reiterated “China-U.S. economic and trade consultation can only follow the correct track of mutual respect, equality and mutual benefit for there to be hope of success.”

In a survey the European Union Chamber of Commerce in China, EU companies are generally sceptical on whether China will release open up market assess. European businesses continued to witness “sustained support for state-owned enterprises, higher incidences of unfair technology transfers and the strengthening of the Communist Party’s role in business.” It’s also noted that “one of the more significant shortcomings of China’s reform agenda is that certain high-level promises to improve its business environment for international companies have failed to translate into concrete action.”

More importantly, European Chamber Vice President Charlotte Roule complained that “our members have reported that compelled technology transfers not only persist, but that they happen at double the rate of two years ago.” And, “it is unacceptable that this practice continues in a market as mature and innovative as China,”

Here are some highlights of the survey results:

Germany’s Bundesbank said in the monthly report that the rebound in Q1 was largely due to one-off factors. Underlying momentum in the economy remained weak and growth might not sustain.

It noted that “these effects, which had largely driven growth after the turn of the year, are expected to lapse or even reverse… Moreover, downturn forces continue to be prevalent in industry, and they may even intensify somewhat.”

In addition, automakers were facing weaker external demand. Global car sales were expected to contract further in 2019, extending the drop in 2018.

It’s reported, without confirmation yet, US Trade Representative Robert Lighthizer will travel to Japan on May 24. He will meet Japanese Economy Minister Toshimitsu Motegi to resume trade negotiations. Trump declared auto-imports as threat to national security last week. And Lighthizer will have 180 days to complete the trade agreement. Otherwise, Trump might start imposing tariffs on autos and parts from Japan.

Kenji Wakamiya, chairman of the lower house of parliament’s foreign affairs committee, said he expected Trump would not be as tough on Japan as it had been on China. He added US could demand Japan set targets on US productions by their automakers. However, he warned that “it would be difficult for the Japanese government to tell carmakers what they should do. They have their ideas and shareholders … So it won’t be easy.

Separately, the claim of auto imports as national security threat to US infuriated Japanese maker Toyota Motor. Toyota said in a statement last Friday that Trump’s proclamation “sends a message to Toyota that our investments are not welcomed, and the contributions from each of our employees across America are not valued.”

Japan’s economy showed surprising resilience even though there were speculations of contractions. Q1 GDP grew 0.5% qoq versus expectations -0.1% qoq. Annualized, GDP grew 2.1%. However, the details are rather weak indeed. Consumer spending dropped -0.1% qoq. Business spending also dropped -0.3% qoq. Exports also had the biggest contraction since 2015. The figures argue that Japan might be entering into a mild recession

Though, the government will watch the impact of trade tensions carefully. Exports are already slowing, and output remains weak due to China’s economic slowdown. Some manufacturers are also delaying capital spending, leading to decline in capital expenditure.

USD/CHF weakens mildly after failing to break 4 hour 55 EMA. But it’s staying above 1.0050 temporary low and intraday bias remains neutral. Further decline remains mildly in favor as long as 1.0126 support turned resistance holds. On the downside, break of 1.0050 will resume the fall from 1.0237 to retest 0.9879 key support. However, firm break of 1.0126 will turn bias back to the upside for 1.0237 resistance. 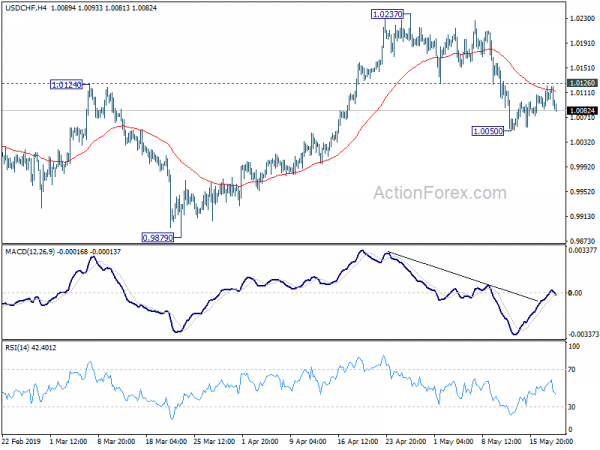 In the bigger picture, as long as 0.9879 support holds, medium term up trend form 0.9186 is still in progress. Break of 1.0237 will target 1.0342 resistance next. For now, we’d be cautious on strong resistance from there to limit upside, until we see medium term upside acceleration. However, decisive break of 0.9879 will be a strong sign of medium term reversal. Focus will be turned back to 0.9716 support for confirmation. 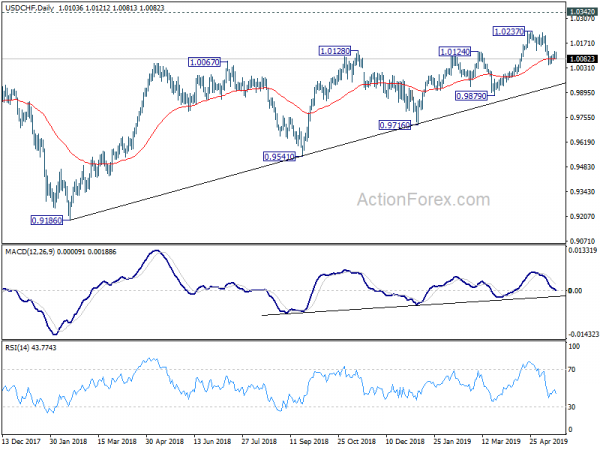