Dollar suffered another round of selloff this week and remains broadly weak today. Free fall in treasury yields continued overnight with 10-year yield closing at 2.081, down -0.061. 2% handle is now looking vulnerable with current downside acceleration. Tech stocks were hit hard with NASDAQ lost -1.61%, on news that US Justice Department was planning to begin an antitrust investigation into Google. Meanwhile, US formally blamed China for “blame game” in its white paper on trade. Mexico drew a clear red line in rejection so called “safe third country” options in tariff-migration negotiations with US. St. Louis Fed President James Bullard now openly called for a rate cut as insurance to sharp slowdown. These are all Dollar negative factors.

Staying in the currency markets, Dollar stays weak together with New Zealand and Australian Dollar. RBA delivered the highly anticipated rate cut and hinted that more could be coming. Yen is currently the strongest one for today, but it’s generally staying in consolidation except versus Dollar. It may still take some more time before Yen is in full gear again. Euro is currently the second strongest, very much helped by rally in EUR/USD.

Technically, 1.1263 resistance in EUR/USD, 0.6988 resistance in AUD/USD and 1.3429 support in USD/CAD are the levels to watch today. Decisive break of these levels will be strong signal of near term bearish reversal in Dollar. That will align with bearish outlook in USD/CHF and USD/JPY too and indicates more downside for the greenback ahead. At the same time, with such development, gold could head further for a test on 1346.71 near term resistance.

On Monday, US Trade Representative and Treasury Department issued a joint statement in response to China’s “White Paper” on trade negotiations. The statement criticized China for pursuing a “blame game misrepresenting the nature and history of trade negotiations between the two countries.” And, all started with “unfair trade practices that China has engaged in for decades, which have contributed to persistent and unsustainable trade deficits”

They also hit back on China’s claims and noted “our insistence on detailed and enforceable commitments from the Chinese in no way constitutes a threat to Chinese sovereignty.” They emphasized that “the issues discussed are common to trade agreements and are necessary to address the systemic issues that have contributed to persistent and unsustainable trade deficits.”

As Mexican officials are meeting US counterparts this week to avert sudden increase in tariffs, Foreign Minister Marcelo Ebrard rejected that the so called “safe third country” proposal. Under this option favored by some US officials, Mexico will be forced to handle Central Americans seeking asylum in the US. Ebrard said “an agreement about a safe third country would not be acceptable for Mexico… They have not yet proposed it to me. But it would not be acceptable and they know it.”

Ebrard also hit back at Trump’s claims that Mexico was doing “nothing” to help the US. And he said 250k more immigrants would reach the United States in 2019 without its efforts. He reiterated the country’s commitment to continue to work on curbing migration flows from Central America to US.

Separately, Mexican Economy Minister Graciela Marquez warned in a statement that Trump’s tariffs on Mexican imports would affect all 50 US states, harm value chains, consumers and trade-related jobs in both countries. The proposed tariffs would cause total economic damage to the agriculture sector of $117 million per month in both countries. Marquez also pledged to retaliate if the proposed tariffs were imposed.

Mexico’s ambassador to the United States, Martha Barcena, also warned “Tariffs, along with the decision to cancel aid programs to the northern Central American countries, could have a counterproductive effect and would not reduce migration flows.”

St. Louis Fed President James Bullard warned the current policy rate setting is “inappropriately high” in the remarks presented to the Union League Club of Chicago on Monday. And, a rate cut could be coming soon to help “re-center inflation and inflation expectations” and provided “insurance” in case of “sharper-than-expected slowdown.”

He noted that US GDP growth in 2019 is expected to be a a lot slower than 3.2% over the last year. And more importantly “to the extent global trade uncertainties have become more severe, this slowing may be sharper than previously anticipated”.

Additionally, he noted that yield curve inversion has become more pronounced recently, with 10-year yield below federal funds rate. And, “Financial markets appear to expect less growth and less inflation going forward than the FOMC does, a signal that the policy rate setting may be too restrictive for the current environment.”

On the economy, RBA expects growth to be around 2.75% in 2019 and 2020. Outlook for household consumption is the “main domestic uncertainty, which is “affected by a protracted period of low income growth and declining housing prices”. The central bank noted the tick up in unemployment to 5.2% in April. But the data suggests that “Australian economy can sustain a lower rate of unemployment.” RBA also noted “lower than expected” inflation outcomes which “suggest subdued inflationary pressures across much of the economy”. But inflation is still expected be at 1.75% in 2019 and 2.00% in 2020.

Australia retail sales dropped -0.1% mom in April, below expectation of 0.2% mom. Current account deficit narrowed to AUD -2.9B in Q1. New Zealand terms of trade index rose more than expected by 1.0% qoq in Q1. Japan monetary base rose 3.6% yoy in May. UK BRC retail sales monitor dropped -3.0% yoy in May.

Looking ahead, UK will rlease construction PMI in European session. Eurozone will rlease CPI flast and unemployment rate. US will release factory orders.

EUR/USD’s rise extends further today and it’s now pressing 1.1263 key near term resistance. At long as this resistance holds, outlook will stay bearish. That is, larger down trend from 1.2555 should resume sooner rather than later through 1.1107 low. However, considering bullish convergence condition in daily MACD, firm break of 1.1263 will be an early sign of medium term bottoming. Intraday bias will be turned back to the upside for 1.1448 resistance for confirmation. 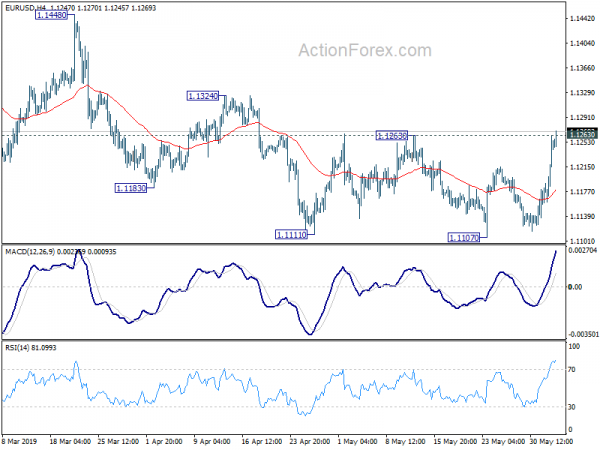 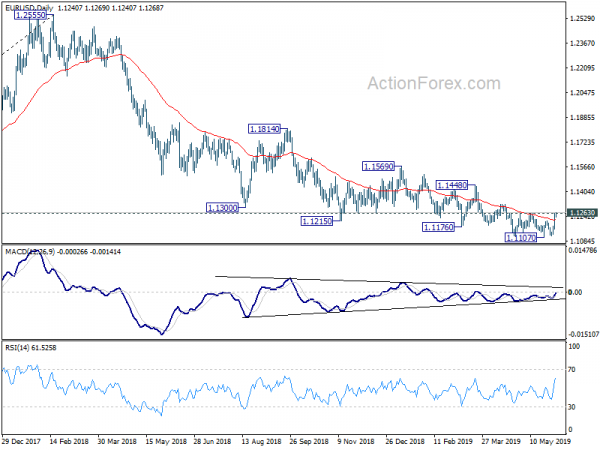