Dollar recovers broadly today while stocks markets rebound. Threat of US-Mexico trade war vanished after Trump announced to suspend indefinitely the plan to impose tariffs on all Mexican imports. An agreement was made between the US and Mexico on migration issue. At this point, there is no confirmation of bottoming in the greenback yet. But with a key uncertainty removed, it’s more likely for Fed to hold on to its patient stance longer to see how things play out. Thus there is prospect of a stronger rebound in the greenback.

Staying in the currency markets, Canadian Dollar is the second strongest as the week starts., followed by Sterling. New Zealand and Australian Dollars are the weakest ones. Surprised sharp contraction in Chinese imports in May is a key factor weighing down on both currencies. Yen is the third weakest following improvement in risk sentiments.

Technically, 0.6962 minor support in AUD/USD is a level to watch. Break will suggest earlier than expected completion of the rebound form 0.6864. Similarly, 1.1251 in EUR/USD and 1.2668 in GBP/USD will carry similar implications. 0.8902 temporary top in EUR/GBP is also in focus and break will indicate resumption of recent rally towards 0.9101 key resistance.

G20 Finance Ministers the Central bank Governors said in the post-meeting communique that global growth “appears to be stabilizing” and is “generally projected to pick up moderately later this year and into 2020. However, risks to global growth remain “tilted to the downside”.

And they warned, “most importantly, trade and geopolitical tensions have intensified.” The group pledged to “continue to address these risks, and stand ready to take further action.” However, the originally proposed language of “recognize the pressing need to resolve trade tensions” was dropped.

Nevertheless, the group still “reemphasize that international trade and investment are important engines of growth, productivity, innovation, job creation and development”. And they will “continue to take joint action to strengthen international cooperation and frameworks.”

US Mnuchin: Trump perfectly happy to move forward with tariffs on China if they don’t want a deal

On the sidelines of the G20 finance minister meeting in Fukuoka, Japan, US Treasury Secretary Steven Mnuchin US-China trade negotiation is at a crossroad like that ahead of the December G20 meeting in Buenos Aires. He said Trump needs to “see action” to make sure Chinese President Xi is heading “in the right direction” regarding the trade deal. Mnuchin added that Trump will make a decision after the Trump-Xi meeting in Osaka on June 28-29 G20 leader summit.

On Huawei’s banning, he said “what the president is saying is, if we move forward on trade, that perhaps he’ll be willing to do certain things on Huawei if he gets comfort from China on that and certain guarantees”. However, he emphasized “these are national security issues”.

Also, Mnuchin said he “had constructive meeting with PBOC Governor Yi Gang, during which we had a candid discussion on trade issues.”

China’s import unexpectedly contracted by -8.5% yoy in May. That’s the large contraction since July 2016, indicating underlying weakness in the economy. Exports did unexpectedly rose 1.1% yoy. But that was likely because of front-loading ahead of new US tariffs. Trade surplus, thus, widened to USD 41.7B. Meanwhile, trade with US continued to deteriorate. From January to May, imports dropped US dropped -29.6% yoy while, exports dropped -8.4% yoy, leaving a surplus at USD 110.5B.

Data from US, China and Australia to watch, with SNB

SNB is the only featured central bank event this week. Given current economic uncertainty and market volatility, there is no chance for SNB to chance it’s sentiment. Negative interest rates remain essential, as well as the readiness to intervene in the currency markets to prevent sudden sharp appreciation in the Franc.

Economic data from US, China and Australia will be the most important ones to watch. While risks of tariffs on Mexico are averted for now, US economy will needed to display some resilience in retail sales and inflation to ease Fed official’s worries. Chinese data will give more evidence on the impact of latest escalation in trade war. Australian employment data will be the key on whether RBA would need to pull ahead another rate cut to July.

Intraday bias in AUD/USD is turned neutral first with today’s retreat. Further rise is in favor as long as 0.6962 minor support holds. Break of 0.7022 will extend the rebound from 0.6864 short term bottom. Break of 0.7069 resistance will target 0.7205 structural resistance next. On the downside, though, break of 0.6962 will indicate completion of the rebound and turn bias back to the downside for retesting 0.6864 low. 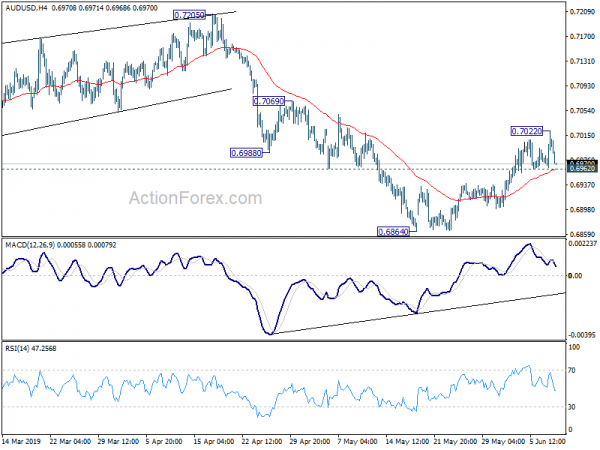 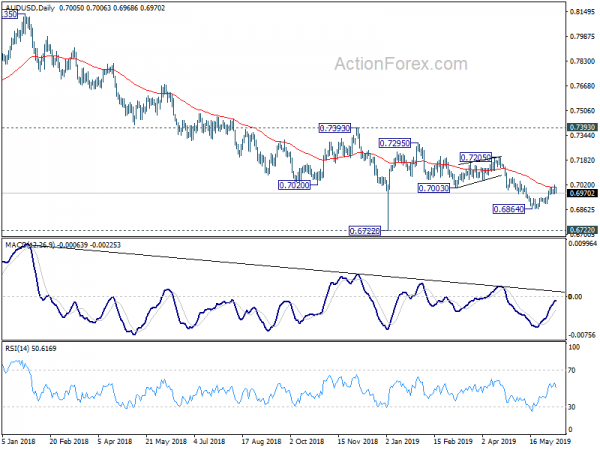