Asian markets trade broadly higher on increasing “optimism” regarding US-China trade war. Some form of agreement is anticipated out of the Trump-Xi summit on Saturday to avoid further tariff escalation. Yen and Swiss France are trading as the weakest one for more, followed by Euro. Australian and New Zealand Dollar are the strongest one, followed by Dollar. Canadian Dollar jumped overnight following surge in oil prices. There is prospect of more strengthen in Loonie ahead.

Technically, there is no change in the outlook in Dollar yet, despite current recovery. The greenback might at least need to wait until tomorrow’s PCE inflation before taking the next move. 1.1317 support in EUR/USD, 1.2642 support in GBP/USD, 0.9854 in USD/CHF and 108.80 resistance in USD/JPY have to be taken out to confirm that Dollar is reversing. Otherwise, risks will stay on the downside for the greenback.

The Trump-Xi meeting on sideline of G20 in Japan is confirmed to be held at 0230 GMT on Saturday. The South China Morning Post in Hong Kong reported that conditions on stopping further escalation in tariffs are already agreed upon. And the agreement will be laid out after the meeting in form of coordinated press releases, rather than joint statement.

Public comments regarding 25% tariffs on USD 300B of Chinese imports, essentially all untaxed, would end on July 2. Trump could formally make a decision to start imposing the tariffs very soon, should trade negotiations collapse once again. Trump also made himself very clear yesterday and said “I would do additional tariffs, very substantial additional tariffs, if that doesn’t work, if we don’t make a deal.”

San Francisco Fed President Mary Daly said yesterday that she is uncomfortable with current direction of inflation. And, “headwinds, slowing growth could strengthen argument for rate cut.” And that could help “bring the economy back to potential growth, support return of inflation to target”

However, she emphasized that it’s a “challenging time” and “risk management is on my mind”. wants to “see another US jobs report to see if last report was noise or a more meaningful sign.” Also, the next several weeks will be key to showing how much of an argument there is for a rate cut.

BoJ Wakatabe: Monetary policy won’t be normalized until economy and prices are back to normal

BoJ Deputy Governor Masazumi Wakatabe said told business leaders in Aomori that “the ultimate objective of monetary policy is the sound development of the economy. In other words, monetary policy won’t be normalized until the economy and prices are in a normal state.” And he pledged “the BoJ will guide policy to ensure Japan never falls into deflation again.”

Meanwhile, Wakatabe urged ” increased attention to heightening risks to the BoJ’s scenario”. In particular, prolonged US-China trade tensions would not just hit the global economy through higher tariffs. Sentiments would be dampened and businesses could be discouraged from investing.

ANZ noted: “The outlook for the economy is murky. As things stand, there is no reason for the economy to fall into a deep hole. Commodity prices are good, interest rates are at record lows, and the labour market is tight. But the economy is facing credit and cost headwinds and the global outlook is deteriorating. On the latter, for all that our commodity prices have been resilient, the risks are looking decidedly one-sided. Upside risks to growth appear few and far between and with the inflation outlook not consistent with the target midpoint we expect two more OCR cuts this year.”

USD/CHF’s recovery from 0.9695 extends higher today but stays below 0.9854 support turned resistance. Intraday bias stays neutral and outlook remains bearish for another decline. On the downside, break of 0.9695 will resume the fall from 1.0237 to 0.9587 fibonacci level. Nevertheless, break of 0.9854 will indicate short term bottoming and target 1.0014 resistance instead. 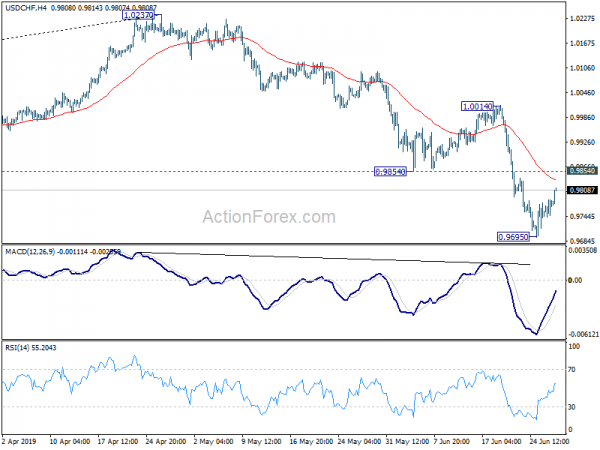 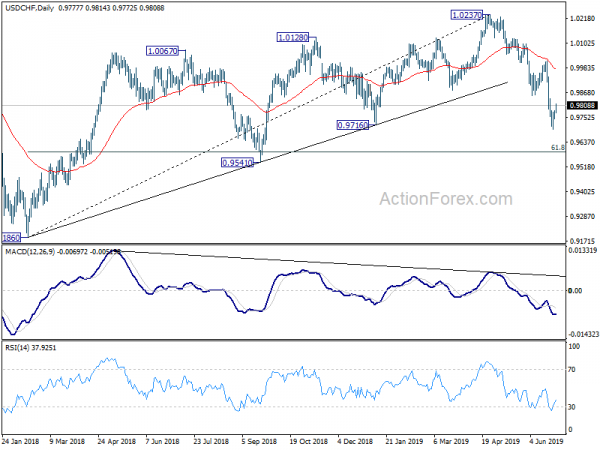 Looking For Some PMI Relief