Sterling drops broadly today as the new government is starting step up their hard line rhetorics on Brexit. Australian and New Zealand Dollar are also weak as markets await US-China trade negotiations that start tomorrow. Expectations for the talks in Shanghai are so far rather low. Swiss Franc and Yen are the strongest ones on mild risk aversion. Investors are generally turning cautious ahead of Fed’s rate on Wednesday. Dollar and Euro are mixed for now.

Technically, GBP/USD’s decline accelerates after taking out 1.2391 key support firmly. It’s heading to 1.2154 projection level first and then 1.1946 low next. GBP/JPY breaks 133.85 support to resume recent fall, targeting 131.15 low. EUR/GBP is targeting 0.9051 resistance. Based on current momentum this level could be taken out to resume larger rise for 0.9101 key resistance next.

UK Prime Minister Boris Johnson’s spokesman said today that John is ready for Brexit talks, only when EU is willing to change its position. The spokesman said “the PM has been setting out to European leaders the position … that the Withdrawal Agreement with the backstop has not been able to pass parliament on the three occasions it was put in front of parliament. Therefore it needs to change”. And, “the prime minister would be happy to sit down when that position changes. But he is making it clear to everybody he speaks to that that needs to happen.”

UK Raab: Easier to get a good deal with EU after no-deal Brexit

UK Foreign Minister Dominic Raab warned today that the “undemocratic” Irish backstop needs to be removed from the Brexit Withdrawal Agreement. He said “we want a good deal with EU partners and friends but that must involve the abolition of the undemocratic backstop.” He added, what Prime Minister Boris Johnson “has instructed and the cabinet has accepted” is a turbo-charging of no-deal Brexit preparations.”

Raab also said UK will be in a better position to negotiate a “good deal” with EU if it crashes out of the bloc before the end of October. The no-deal scenario could provide more leverage for a free trade agreement and resolve long-standing issues. He said “The prospect of reverting and getting a good deal will be easier after we have left if that is the case. The reason being we do as an independent third country and less subject to effectively the demands of the EU as we are now.”

CBI: Both UK and EU are under-prepared for no-deal Brexit

The Confederation of British Industry warned in a report, published on Sunday, that neither UK nor EU are ready for no deal Brexit, as contingency planning study finds. The report criticized that while US has made many proposals “many of its plans delay negative impacts but do not remove them”. EU has “taken fewer steps to reduce the damage of no deal”. And, “very few joint actions to mitigate no deal have taken place, creating a high number of areas where continued UK-EU negotiations are inevitable”. Business efforts have been “hampered by unclear advice, tough timelines, cost and complexity”.

Josh Hardie, Deputy-Director General, said: “. Both sides are underprepared, so it’s in all our interests. It cannot be beyond the wit of the continent’s greatest negotiators to find a way through and agree a deal… It’s not just about queues at ports; the invisible impact of severing services trade overnight would harm firms across the country… Preparing for no deal is devilishly difficult. But it is right to prepare.”

SNB site deposit had largest weekly rise since May 2017

SNB site deposit rose by CHF 1.7B to a record CHF 581.2B last week. That’s also the biggest weekly rise since May 2017. The large jump argued that the central bank could have been intervening in the currency market last week.

ECB’s dovish policy was the trigger in the surge in Franc’s exchange rate versus Euro. At the same time, ECB is widely expected to finally announce an easing package with a rate cut in September.

For now, there is no sign that SNB would set another floor for EUR/CHF yet. And it’s believed that SNB is looking at the speed of the exchange rate move, rather than a specific figure.

Japan’s Cabinet Office projects the economy to grow just 0.9% in the fiscal year ending March 2020. That’s a notable downgrade from prior forecast of 1.3%. For the following year, growth is forecast to pick up to 1.2%, though.

For the current fiscal year, exports growth is forecast to slow to just 0.5%, sharply lower than January’s projection of 3.0%. That would be the weakest growth since fiscal 2012. On the other hand, robust corporate investment and private consumption should help offset some of the drag from exports.

On prices, the Cabinet office forecasts over CPI to be at 0.7% in this fiscal yet, and 0.8% next. Both figures are well below BoJ’s 2% target. 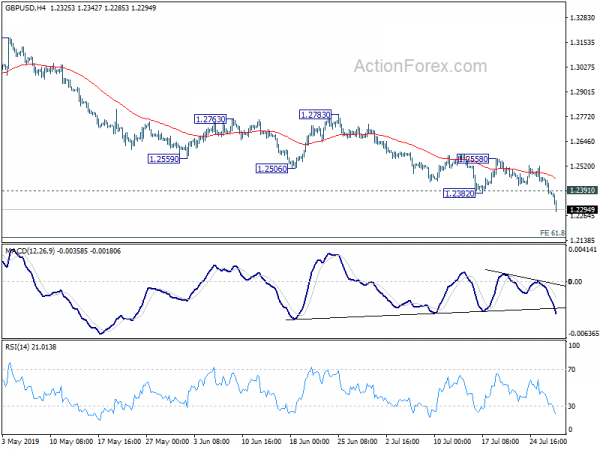 In the bigger picture, down trend from 1.4376 (2018 high) is still in progress and is resuming. Such decline should target a test on 1.1946 long term bottom (2016 low) next. For now, we don’t expect a firm break there yet. Hence, focus will be on bottoming signal as it approaches 1.1946. In any case, medium term outlook will stay bearish as long as 1.3381 resistance holds, in case of strong rebound. 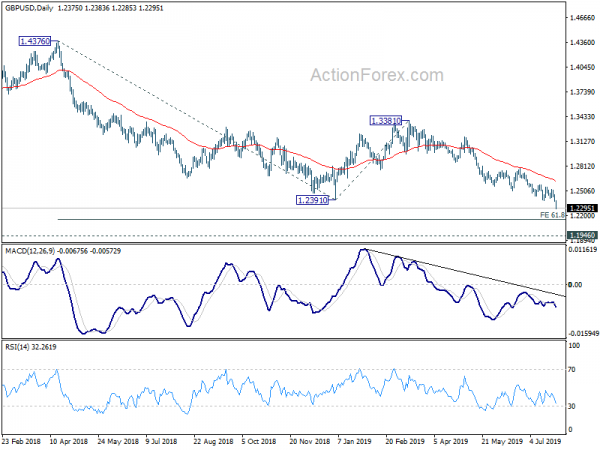