Dollar was shot up overnight as Fed’s rate cut was, overall, less dovish as expected. At least, Chair Jerome Powell clearly indicated that it’s not the start of a lengthy easing cycle. The greenback remains firm in Asian session, together with Australia and New Zealand Dollar. The latter two was lifted mildly by improvement in Chinese manufacturing data. On the other hand, Yen is kept weak, struggling between contrasting force of risk aversion and receding rate cut bets. Sterling is the second weakest, awaiting BoE Super Thursday.

Technically, EUR/USD’s strong break of 1.1107 low confirms resumption of down trend from 1.2555 (2018 high). It’s a key indication of Dollar strength. The development was also accompanied by break of near term resistance of 0.9951 in USD/CHF and 108.99 in USD/JPY. Further broad based rally in Dollar in now in favor. Sterling appears to have stabilized, as seen in pull back in EUR/GBP and recovery in GBP/JPY. Climax of selloff should have passed for now, awaiting next trigger from Prime Minister Boris Johnson.

Dollar surges broadly overnight after Fed cut interest rate by -25bps to 2.00-2.25% as widely expected. The trigger for Dollar buying came from Fed Chair Jerome Powell’s press conference. He described the rate cut as a “mid-cycle” adjustment of policy, and then added he was “contrasting with the beginning of a lengthy cutting cycle”. The message was clear that he tried to talk down the expectations of further interest rate cuts ahead. The key would be developments in global economy, trade tensions, domestic data and inflation.

Trump bashed Powell again with his tweets. Trump said “What the Market wanted to hear from Jay Powell and the Federal Reserve was that this was the beginning of a lengthy and aggressive rate-cutting cycle which would keep pace with China, The European Union and other countries around the world….As usual, Powell let us down, but at least he is ending quantitative tightening, which shouldn’t have started in the first place – no inflation. We are winning anyway, but I am certainly not getting much help from the Federal Reserve!”

BoJ Deputy Governor Masayoshi Amamiya signals today that the central bank stand ready to loosen up monetary policy further. In a speech to business leaders, he said, “the BOJ is no different from other major central banks, in that it is prepared to take, if necessary, policy action to prevent risks from materializing.”

He added that overseas risks could spillover to Japan and, “We need to be mindful that the economy may lose momentum if risks, mainly those from overseas economies, materialize”. BoJ’s tool set includes rate cuts and asset purchases and policy makers may “combine these steps or apply them in various forms.”

Japan PMI Manufacturing was finalized at 49.4 in July, revised down from 49.6, just fractionally above June’s 49.3. Joe Hayes, Economist at IHS Markit, said: “Latest manufacturing PMI data did little to suggest that the worst has passed for the global goods-producing sector. Japanese manufacturers cut output for the seventh consecutive month amid soft demand from domestic and overseas clients…

“Forward-looking survey indicators suggest that manufacturers in Japan are set for another difficult quarter, as firms scaled down stocks and input purchasing to keep a lid on costs…. Furthermore, more signs that the manufacturing downturn has now become deeply rooted was apparent in prices data, as output charges were reduced at the fastest pace in nearly three years amid increasing efforts to stimulate sluggish demand.”

China Caixin PMI Manufacturing rose to 49.9 in July, up from 49.4 and beat expectation of 49.6. Markit noted that production stabilized amid slight uptick in new work. However, employment fell at the quickest pace for give months. Also, factory gate prices declined for the first time since January.

Zhengsheng Zhong, Director of Macroeconomic Analysis at CEBM Group said: “China’s manufacturing economy showed signs of recovery in July. Business confidence rebounded, reflecting the strong resilience in the economy. Policies such as tax and fee reductions designed to underpin the economy had an effect. The situation may strengthen policymakers’ insistence to regulate the property market and the finance industry.”

BoE rate decision is a major focus today. The central bank is widely expected to hold Bank Rate unchanged at 0.75%. Asset purchase target will be kept at GBP 435B too. Both decisions are expected to be unanimous. BoE will also release quarterly Inflation Report with updated economic projections. But after all, the form of Brexit remains the biggest risks to the UK economy and BoE will reiterate that policy actions to Brexit is not automatic. 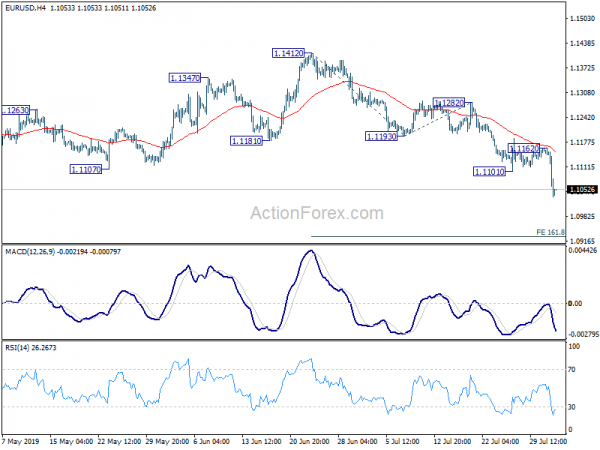 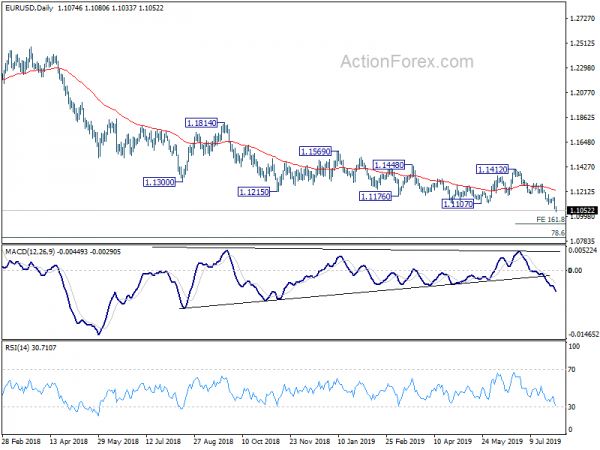