Asian markets tumbled sharply earlier today in response to US designation of China as currency manipulator. USD/CNH also jumped to new high at 7.1399. But China’s PBoC appeared to be trying to “smooth” Yuan’s decline despite hard line rhetorics elsewhere. Asian stocks quickly pared back much of today’s losses. In the currency markets, Australian Dollar is the strongest one for today, followed by Sterling and New Zealand Dollar. Yen is the weakest, followed by Swiss. But of course, for the week so far, Yen is the strongest, then Swiss. Aussie is worst followed by Dollar.

Technically, EUR/USD rebound from 1.1026 short term bottom extends higher today but for now, we’d expect strong resistance from 1.1282 resistance to limit upside. Dollar turns softer again in GBP/USD, AUD/USD and USD/CAD. We’d expect this pairs to engage in consolidative trading for a while. Yen appears to be losing upside momentum, as seen in recovery in USD/JPY, GBP/JPY and more notably EUR/JPY. Yen should now engage in near term consolidations too.

US Treasury Department, formally determined China as currency manipulator yesterday, for the first time since 1994, after USD/CNH surged through the psychologically important 7 handle. In the statement, US said under Section 3004 of the Omnibus Trade and Competitiveness Act of 1988 , the Treasury Secretary Steven Mnuchin has “determined that China is a Currency Manipulator.”And, He will “engage with the International Monetary Fund to eliminate the unfair competitive advantage created by China’s latest actions,”

It’s pointed out that “the Chinese authorities have acknowledged that they have ample control over the RMB exchange rate.” In particular, US Treasury referred to PBoC statement that noted it “has accumulated rich experience and policy tools, and will continue to innovate and enrich the control toolbox, and take necessary and targeted measures against the positive feedback behavior that may occur in the foreign exchange market.”US said “this is an open acknowledgement by the PBOC that it has extensive experience manipulating its currency and remains prepared to do so on an ongoing basis.

Suggested reading: US’ Designation of China as Currency Manipulator Makes it Harder to Reach Trade Deal

In a strongly-worded editorial, the People’s Daily, China’s official newspaper, condemned that the US was “deliberately destroying international order”. The piece was published hours after US decision to designate China as currency manipulator, even though such issue was not mentioned. The editorial said the responsibility of big countries is to provide the world with stability and certainty. However, “some people in the United States do just the opposite”.

USD/CNH edged higher to 7.1399 earlier today but pulled back from there. It’s currently trading at 7.07, below yesterday’s close. There is sign that PBoC is looking at stem the free fall in Yuan. The general consensus remains that China wouldn’t want steep fall in Yuan exchange rate, which would trigger disastrous capital outflow and decline in asset prices. Instead, the Chinese government would likely prefer controlled depreciation.

RBA left cash rate unchanged at 1.00% as widely expected. The accompanying statement is tweaked a bit further to the dovish side. The central bank noted that “it is likely to take longer than earlier expected for inflation to return to 2 per cent.” Also, “it is reasonable to expect that an extended period of low interest rates will be required in Australia”. But overall, the statement doesn’t alter expectations for one more rate cut this year, probably another in the first half of next year depending on development.

On the economy, RBA acknowledged that growth has been “lower than earlier expected” in first half. The central scenario is for growth to be at around 2.50% over 2019 and 2.75 over 2020. Consumption remains the main domestic uncertainty. Unemployment rate is expected to “decline over the next couple of years to around 5 percent”. And RBA reiterated that “Australian economy can sustain lower rates of unemployment and underemployment.” Inflation is projected to stay a “a little under” 2% over 2020 and a little above 2% over 2021. 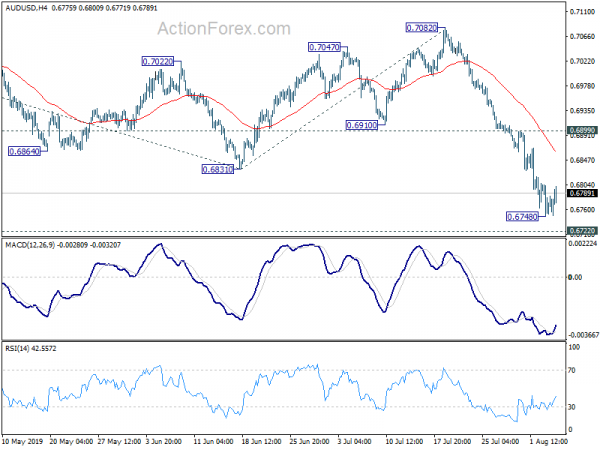 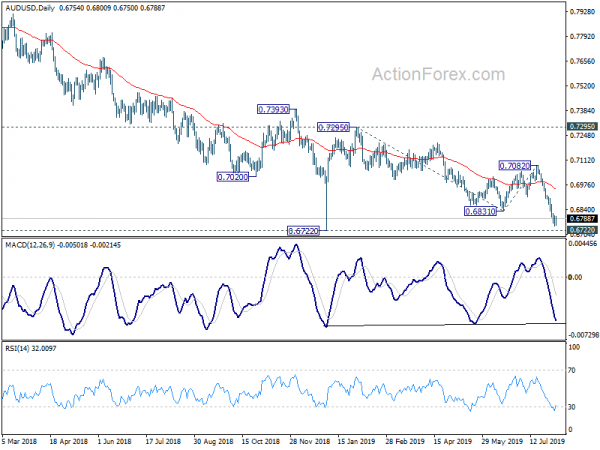 Crude Oil As The Weakest Link In China Virus Story