Swiss Franc rises broadly today as risk aversion stays in the markets, even though Yen is firm but relatively unmoved. Sterling also recovers with help from stronger than expected wage growth. On the other hand, New Zealand and Canadian Dollars are the weakest while Australian is not too far away. Though, it should noted that Dollar is soft today despite stronger than expected inflation reading. It seems that pickup in inflation wouldn’t stop Fed for further easing should trade tensions escalate further.

Technically, USD/CHF’s break of 0.9695 support should indicate resumption of fall from 1.0237 to 0.9587 fibonacci level. EUR/CHF also breaks 1.0863 support to resume recent down trend to 1.0645 projection level. Yen crosses would be the focus today, in particular with it’s correlation to treasury yields. Further decline in 10- and 30-year yields in US could drag Yen crosses lower, in particular USD/JPY.

Trump appears to be happy with the inflation reading as well as his tactics with China. He tweeted: “Through massive devaluation of their currency and pumping vast sums of money into their system, the tens of billions of dollars that the U.S. is receiving is a gift from China. Prices not up, no inflation. Farmers getting more than China would be spending.”

The request came as US and Japan are crafting out a broad trade agreement, reportedly by September. Also, it came as China halted its own purchase of US farm goods as trade tensions escalated recently.

Kyodo also said that Trump has specifically asked Japan to by products such as soybeans and wheat. Yet, he preferred such purchases to be outside of the framework of the current trade talks. Japan government is said to be considering its own responses. And one proposal was to by such farm products as food support for Africa.

“The ZEW Indicator of Economic Sentiment points to a significant deterioration in the outlook for the German economy. The most recent escalation in the trade dispute between the US and China, the risk of competitive devaluations, and the increased likelihood of a no-deal Brexit place additional pressure on the already weak economic growth. This will most likely put a further strain on the development of German exports and industrial production,” comments ZEW President Professor Achim Wambach.

UK unemployment rate rose to 3.9% in the three months to June, up from 3.8%, above expectation of 3.8%. Unemployment rate came in at 4.1% for men and 3.6% for women, the latter being joint lowest since comparable records began in 1971. For the same period, an estimated 1.33m people were unemployment, 33k fewer than a year ago.

On the other hand, South Korean President Moon Jae-in said today that “the Japanese government made a decision to exclude South Korea from white-listed countries, following export restrictions… It is disappointing and regrettable in light of the two countries’ shared efforts for friendship and cooperation.”

Alan Oster, NAB Group Chief Economist said “the decline in business conditions since early 2018 has been broad-based and has continued to track at below average levels in recent months.” And, “this is concerning, because while conditions remain positive, it points to a significant loss in momentum in the business sector”.

Business confidence “ticked-up” but is “also below average”. While there were some positive signs with a post-election lift in confidence, this bounce now looks to have been short lived with confidence also tracking at below average levels in the two months since the election”

And, “with a significant loss of momentum in activity, and inflation indicators remaining weak, the survey points to the need to the need for further stimulus in the economy. Indeed, we expect a further easing in interest rates from the RBA and think that some greater fiscal support will be needed from the government to kickstart growth”.

Singapore Ministry of Trade and Industry downgraded 2019 growth forecast to 0.0-1.0%, and expect growth to come in at around mid-point of the forecast range. That’s notably lower from prior estimate of 1.5-2.5%, after Q2 GDP contracted by -3.3%. The Ministry noted in the statement that “GDP growth in many of Singapore’s key final demand markets in the second half of 2019 is expected to slow from, or remain similar to, that recorded in the first half.”.

Also, “uncertainties and downside risks in the global economy have increased since three months ago”. The risks firstly include US new tariffs on USD 300B in Chinese imports. Secondly, a “a steeper-than-expected slowdown” of China, as precipitated by US tariffs, could lead to a “sharp fall” in Chinese import demands and “negatively affect the region’s growth”. Thirdly, risk of no-deal Brexit “has increased with the recent change in UK’s political leadership.” Fourthly, there are risks from uncertainties in Hong Kong, the trade dispute between Japan and South Korea, as well as geopolitical tensions in North Korea and the Strait of Hormuz. 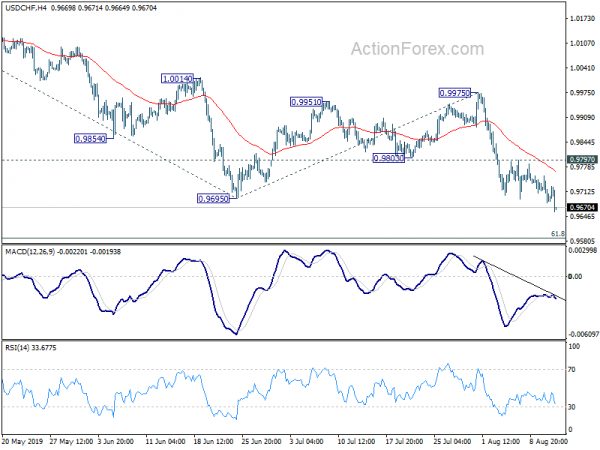 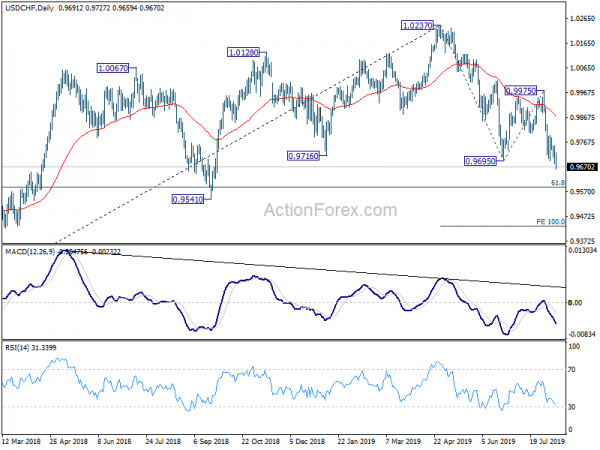