Dollar Softer as Fed Powell Points to New Events, But No Downside Breakout

Dollar weakens mildly after the rather uninspiring speech of Fed Chair Jerome Powell. The highly anticipated is slightly on the dovish side as Powell mentioned a number of new “events after July’s rate cut. Though, sell off in the greenback is rather limited. For the week, Sterling remains the strongest one, followed by Dollar and then Yen. New Zealand Dollar is the weakest, followed by Swiss Franc and Australian.

In the highly anticipated Jackson Hole speech, Fed Chair Jerome Powell noted that the three weeks since July FOMC meeting “have been eventful”. There were new tariffs on Chinese imports, further evidence in global slowdown notably in Germany and China. Also, there were geopolitical events including “growing possibility of a hard Brexit, rising tensions in Hong Kong, and the dissolution of the Italian government.”

Though, US economy has “continued to perform well overall, driven by consumer spending”. Job creation slowed but is “still above overall labor force growth”. Inflation seems to be “moving up closer to 2%. Powell pledged, “based on our assessment of the implications of these developments, we will act as appropriate.

St. Louis Fed President James Bullard, a known dove, told CNBC that “we should get lower here,” on interest rates. He added “The yield curve is inverted. We’ve got one of the higher rates on the whole yield curve. That is not a good place to be”.

Bullard also asked “How much risk are we facing from the fact that we’ve got a global manufacturing contraction going on and possibly more to come?”. And, “I’d like to take out more insurance against that downside risk.”

Cleveland Fed President Loretta Mester said she’s approach next month’s FOMC meeting with an open mind. She added if the economy continues where it is, I would probably say we should keep things the way they are.” Though, she is “very attuned to the downside risks to this economy and I want to make sure we’re always focused on our dual-mandate goals.”

China announced retaliation on tariffs on USD 75B of US imports

China’s Ministry of Commerce announced retaliation tariffs on USD 75B US imports. Additional tariffs of 5% or 10% will be imposed on a total of 5078 products lines originating from US. Goods include agricultural products, crude oil, small aircraft and cars. The first batch will take effect on September 1. Others will take effect on December 15.

German government spokesman Steffen Seibert said that it’s up to the UK to come up with proposals to solve the issue of Irish backstop. He added that the European Commission is ready to discuss any proposal by UK Prime Minister Boris Johnson.

On the other hand, European Commission spokesperson reiterated that “the Commission’s position when it comes to Brexit matters is well known and this remains a united, singular, EU position”. And, “we stand ready to engage constructively with the UK on any concrete proposals that are compatible with the Withdrawal Agreement.”

German Chancellor Angela Merkel said yesterday that a solution for UK to find a solution to remove the Irish backstop from the withdrawal agreement can be achieved by October 31 Brexit date.

The core CPI reading remained well below BoJ’s 2% target and was stuck at the lowest level since July 2017. The data clearly showed that BoJ remains well behind is its efforts to boost inflation. While Japan is in no sense in deflation for now, it’s just a matter of time when BoJ would finally admits that momentum in price is gone.

No change in EUR/USD’s outlook. With 1.1113 minor resistance intact, further decline is still in favor to 1.1026 low. Decisive break there will extend the downtrend from 1.2555. Next target is 1.0813 fibonacci level. On the upside, above 1.1113 minor resistance will turn intraday bias back to the upside to extend the correction from 1.1026. But in that case, we’d expect strong resistance from 1.1249 to limit upside. 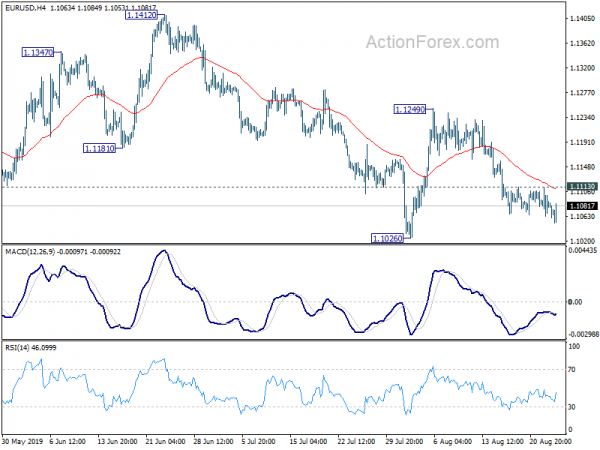 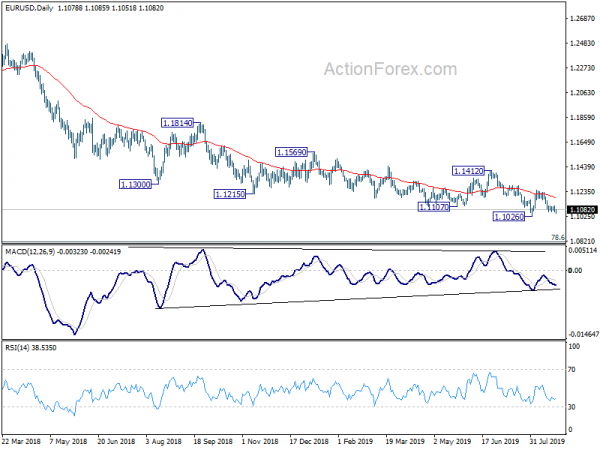