Dollar surges broadly today after a Fed dove said that the rate cuts delivered are already enough to lift inflation back to target. Euro somewhat shrug off weak inflation and PMI data and follows as second strongest, then Swiss Franc. Australian Dollar is the weakest one after RBA’s dovish rate cut. New Zealand Dollar is the second weakest, then Sterling.

Technically, GBP/USD’s strong break of 1.2283 support should confirm completion of whole rebound from 1.1958. Deeper fall should be seen back to retest this low. AUD/USD is on track to retest 0.6677 low and break will resume medium term down trend. EUR/AUD is back pressing 1.6308 resistance and break will pave the way to 1.6786 high. A focus will be on 108.47 resistance in USD/JPY. Break will resume the rally from 104.45 to 109.31 key near term resistance.

Chicago Fed President Charles Evans indicated that Fed could have delivered enough rate cuts to lift inflation back to 2% target, and probably some overshooting. He said that rising trade and geopolitical risks led to global slow down. And the “situation called for us to cut policy rates 50 to 75 basis points below the long-run neutral rate and then leave policy on hold for a time”.

“And, this more accommodative stance is needed to support a roughly similar growth outlook to what I had anticipated before and, importantly, to support moving inflation up with greater assurance to achieve our symmetric 2 percent goal within a reasonable time.”

After rate cut back in July and September, federal funds rate is now sitting at 1.75-2.00%, comparing to neutral rate of 2.50%. Evans said that the current monetary policy stance “could well result in inflation modestly overrunning 2% for some time.

Eurozone PMI Manufacturing was finalized at 45.7 in September, down from 47.0 in August. That’s the lowest level since October 2012. It’s also the eighth straight month of sub-50 reading, indicating that contraction continued. Markit also noted that output, new orders and purchasing all decline sharply during the month. Input costs also fell at the joint-sharpest rate since April 2016.

Chris Williamson, Chief Business Economist at IHS Markit said: “The health of the eurozone manufacturing sector went from bad to worse in September, with the PMI survey indicating the steepest downturn for nearly seven years and sending increasingly grim signals for the fourth quarter… Germany is leading the downturn, with the PMI down to levels not seen since 2009, but Italy and Spain are also in deepening downturns, whilst France’s manufacturing sector has stalled…

“There’s likely worse to come, with forward-looking indicators (such as the orders to-inventory ratio) deteriorating further during the month. Businesses also remain downbeat about the year ahead, with optimism around a seven-year low amid trade war worries, signs of slowing global economic growth and geopolitical concerns, including heightened anxiety over a disruptive Brexit.”

UK PMI Manufacturing recovered to 48.3 in September, up from 47.4 and beat expectation of 47.0. However, Markit noted that downturn continues as rate of jobless accelerated to the worst level since February 2013. New orders and output also fell further. But purchasing and input stocks rose as Brexit preparations restarted.

Rob Dobson, Director at IHS Markit: “The UK manufacturing downturn continued in September, adding to signs that the sector may be sliding into recession. Output, new orders and employment all fell further as rising political, trade and economic uncertainties exacerbated concerns about Brexit… The rate of job losses accelerated to a six-and-a-half- year high, highlighting how manufacturers are increasingly seeking to cut costs. Similarly, the investment goods sector was especially hard hit in September, seeing the sharpest drops in production and new business, as clients reined in capital spending while conditions remained volatile”.

RBA cut cash rate by -25bps to 0.75% as widely expected. The central bank also maintained easing bias. It noted that “the Board will continue to monitor developments, including in the labour market, and is prepared to ease monetary policy further if needed to support sustainable growth in the economy, full employment and the achievement of the inflation target over time.”

In the accompanying statement, RBA also noted that risks global outlook are “tilted to the downside” as US-China disputes are “affecting international trade flows and investment”. Domestically, 1.4% GDP growth in Q2 was “weaker-than-expected”, but appeared to have reached a “gentle turning point”. Forward looking indicators suggest employment is likely to “slow from its recent fast rate” while wages growth remains “subdued”. “Taken together, recent outcomes suggest that the Australian economy can sustain lower rates of unemployment and underemployment.” Inflation also remained “subdued” and is “likely to be the case for some time yet”.

The data suggested that business confidence worsened as global slowdown and trade tensions weighed. Yet, the deteriorations were not as bad as expected and capital expenditure were still holding up. The data could be neutral to BoJ’s policy. That is, they might not add enough pressure to additional easing from the central bank.

Also released, unemployment rate was unchanged at 2.2% in September, better than expectation of 2.3%.

Japan PMI Manufacturing was finalized at 48.9 in September, down from 49.3 in August. That’s also the lowest level since February. Output reduced as deterioration in demand extends into September. Firms link export weakness to lower sales to China, US and Europe. Business expectations remain historically subdued.

Joe Hayes, Economist at IHS Markit, said: Crucially, the stronger deterioration comes ahead of the consumption tax hike, and suggests that manufacturing and exports are both likely to have been drags on third quarter GDP. Japan continues to suffer from the trade-led global growth slowdown… Strength in the trade-weighted yen so far this year has also meant that the currency has not been able to mitigate the impact of the global trade slowdown. To that end, the service sector’s ability to weather the sales tax hike in the fourth quarter will be crucial to keeping the economy afloat into the year-end.”

GBP/USD drops further to as low as 1.2224 so far today and intraday bias remains on the downside. Rebound from 1.1958 should have completed at 1.2582. Deeper decline should be seen o retest 1.1946/58 key support zone next. On the upside, above 1.2346 minor resistance will turn intraday bias neutral first. But risk will now stay on the downside as long as 1.2582 resistance holds. 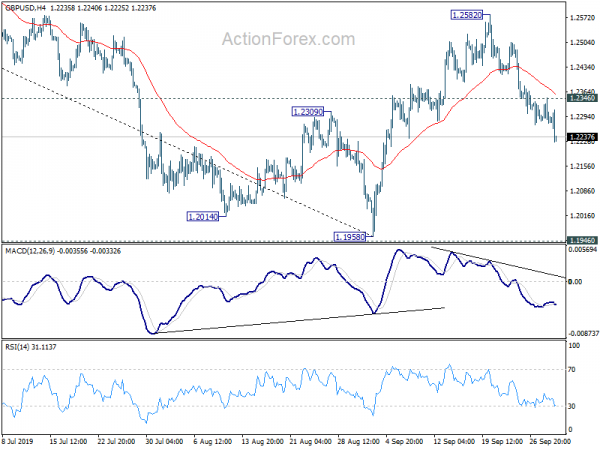 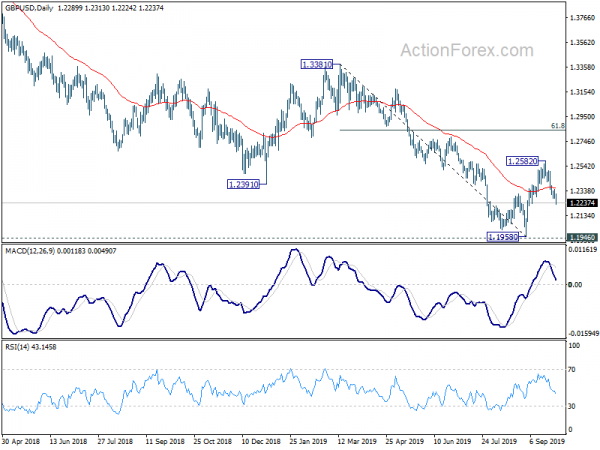