Overall, the forex markets remain generally quiet in very tight range. Australian dollar edged higher in Asian session as lifted by stronger than expected consumer inflation expectations. Yet, there was on follow through buying. Yen and Dollar are both softer as sentiments remain cautious. Traders are very skeptical on whether any progress could be made in US-China trade negotiations. yet, they’re guarding against any positive surprises for now.

FOMC minutes: Some wants clarity on when recalibration of policy would end

Minutes of September FOMC meeting noted that “downside risks to the outlook for economic activity had increased somewhat” since July meeting, particularly those stemming from “trade policy uncertainty and conditions abroad.” And, the minutes warned that the developments “seemed more likely to move in directions that could have significant negative effects on the U.S. economy”.

Domestically, “softness in business investment and manufacturing so far this year was seen as pointing to the possibility of a more substantial slowing in economic growth than the staff projected.” And, “risks to the inflation projection were also viewed as having a downward skew, in part because of the downside risks to the forecast for economic activity”.

Several participants urged to provide “more clarity about when the recalibration of the level of the policy rate in response to trade uncertainty would likely come to an end.”

The South China Morning Post in Hong Kong reported that no progress was made in deputy-level trade talks this week. And Chinese Vice Premier Liu He is set to cut short his trip to Washington. Originally planned to hold two days of meeting on Thursday and Friday, Liu might just leave on Thursday. Though, the rumor was quickly denied by the White House and the spokesman said “We are not aware of a change in the Vice Premier’s travel plans at this time”.

Separately, US Commerce Secretary Wilbur Ross said that “tariffs are finally forcing China to pay attention to our concerns”. Yet, he noted that “trade agreements historically have been very weak on enforcement”. And, “given the magnitude and the complexity of the changes we need, enforcement becomes an extremely critical component of any agreement that we make.”

Looking ahead, Germany trade balance, France industrial output will be featured. But main focus will be on UK GDP and productions, as well as ECB minutes. Later in the day, US CPI will take center stage.

AUD/USD is staying in consolidation from 0.6677 and intraday bias remains neutral first. Recovery might extend but upside upside should be limited by 0.6894 resistance. On the downside, firm break of 0.6670/7 will confirm larger down trend resumption. 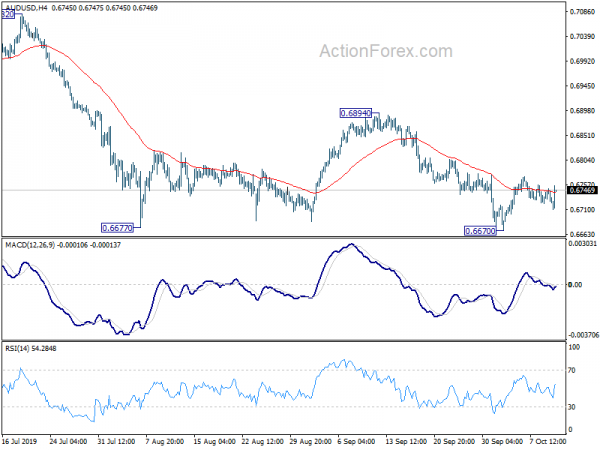 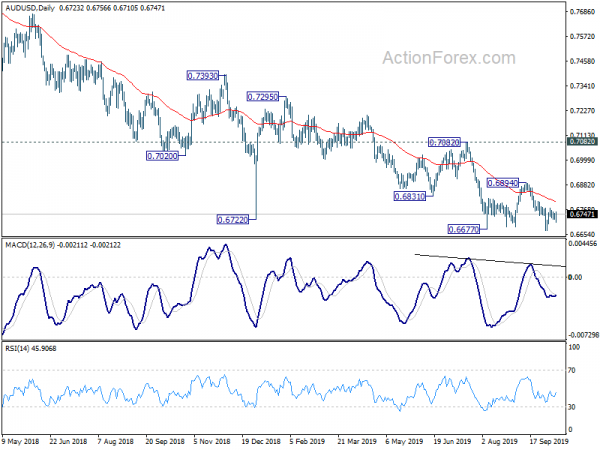