Dollar and Yen are generally softer today following notable rebound in German and US treasury yields. ECB meeting accounts confirmed the divided opinion among policy makers on the stimulus package, in particular QE. That gives a strong support in both Euro and German bund yields. Meanwhile, solid core CPI from US also support US yields. Yet, markets are cautiously awaiting top-level US-China trade talks, which finally starts today.

Chinese Vice Premier Liu He was quoted saying that the team came with “great sincerity, willing to cooperate with the U.S. on the trade balance, market access and investor protection”. He also hoped to prevent further escalation in trade tensions. But there were also reports noting that China is not going to offer any resolution to core issues, including intellectual property theft, forced technology transfer, subsidies to state-owned enterprises and enforcement of the agrement. It remains to be seen whether the two day meetings would end with some progress or just an old deadlock.

ECB accounts: A number of reservations expressed about elements of stimulus package

Accounts of September 11-12 ECB policy meeting showed rather wide division in opinion regarding the new stimulus package. That was inline with comments from ECB officials after that meeting. The accounts noted, “a number of reservations were expressed about individual elements of the proposed policy package”. Also, “although the rational for a comprehensive package was widely shared, members assessed the case for specific elements differently, with some measures seen as substitutes rather than compliments.”

In particular, while here was a “clear majority” favoring restart of QE, “a number of members assessed the case for renewed net asset purchases as not sufficiently strong”. QE was deemed to be a “less efficient instrument, or “an instrument of last resort”. The cut in deposit rate to -0.5% was passed by a “very large majority”. But, “lower money market trading volumes for longer tenors suggested that the conviction about cuts significantly deeper into negative territory was not broad-based and uncertainty over the future path of short-term policy rates remained elevated.”

UK GDP contracted -0.1% mom in August, below expectation of 0.0% mom. Looking at the details, Services was flat mom. Production dropped sharply by -0.6% mom. Manufacturing contracted -0.7% mom. Construction rose 0.2% mom. Agriculture dropped -0.1% mom. In the three months to August, rolling GDP grew 0.3%, but that’s mainly because of the growth back in July. Services was the main drive in the three-month GDP growth, up 0.4% 3mo3m. Production contracted -0.4$ 3mo3m. Construction grew 0.1% 3mo3m.

Garry Young, Director of Macroeconomic Modelling and Forecasting: “Despite better than expected GDP data, the underlying pace of growth in the United Kingdom is slow. The strongest source of private sector demand is household consumption, driven by real wage growth, but this is not sustainable without a pick-up in productivity growth, and this seems unlikely in the near term.”

The slump in export is seen as another evidence of impact from trade wars, which continued to drag on the economy. Continued weakness in manufacturing and exports point to another quarter of GDP contraction, following Q2’s -0.1% qoq. German economy was likely in recession already.

EUR/USD’s rebound from 1.0879 extends higher today and further rise could be seen. But still, upside should be limited by 1.1109 resistance to bring larger down trend resumption. On the downside, break of 1.0941 will turn bias back to the downside for retesting 1.0879 low first. However, firm break of 1.1109 will be an early sign of medium term bottoming and target 1.1412 key resistance next. 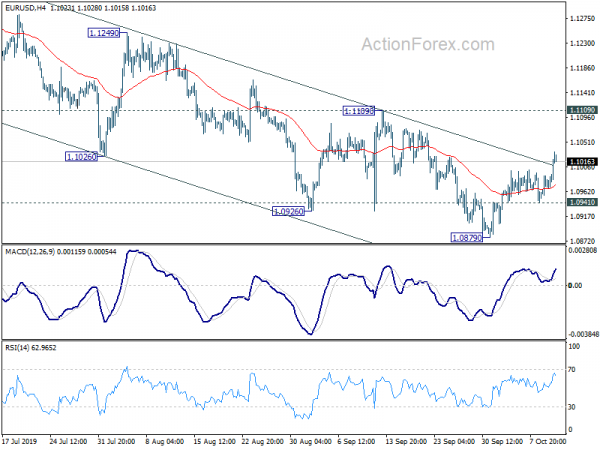 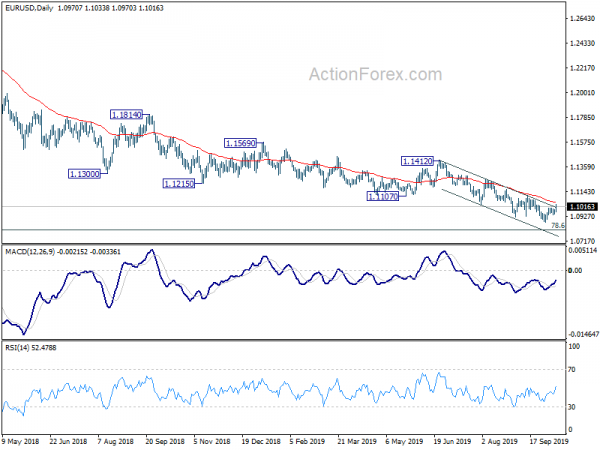