Asian markets opened higher but there is no clear follow through buying so far. Investors are cautiously assessing the overall developments. Nothing is done until everything is done. Even if, unlike last time, China puts all agreed into texts, it just means no more tariffs escalations at best. Much more are needed to be done to revert the world into pre-trade war era. Similarly, more work is needed for both UK and EU to finally complete a Brexit deal that resolves the Irish border deadlock.

In the currency markets, Yen is the strongest one today so far, paring some of last week’s losses. Swiss Franc and Dollar follow on the same reason. On the other hand, Sterling is trading broadly lower, digesting some of last week’s strong gains It’s followed by New Zealand and than Australian Dollar. The two are somewhat weighed down by poor China trade data which showed sharp contractions in both imports and exports.

As noted in a brief statement by European Commission, EU chief Brexit negotiator Michel Barnier held “constructive technical-level talks” with UK over the weekend. However, “a lor of work remains to be done” and technical level discussions will continue on Monday. Barnier is set to brief EU27 minutes at the General Affairs Council on Tuesday.

On the other hand, UK Prime Minister Boris Johnson’s spokesperson said “The Prime Minister said there was a way forward for a deal that could secure all our interests … but that there is still a significant amount of work to get there and we must remain prepared to leave (without a deal) on October 31.”

Reuters quoted a unnamed EU diplomat saying that “differences persist on customs” regarding the Irish border. And, there are “small chances” for a text to be ready for EU summit this week. More time is needed to continue to discussions. European Commission President Jean-Claude Juncker also said in an interview that “it’s up to the Brits do decide if they will ask for an extension… “But if Boris Johnson were to ask for extra time – which probably he won’t – I would consider it unhistoric to refuse such a request.”

BoE Ramsden sees less of a case for rate cut

Nevertheless, Ramsden saw “less of a case for a more accommodative monetary position”, even in case of another Brexit delay. Company wage costs were “picking up quite significantly, which will drive domestic inflationary pressure”. Meanwhile, spare capacity in the economy might not have opened up. Supply potential, the speed limit of the economy, is also slowing through this period

Ramsden’s view was in contract to fellow BoE rate-setters Michael Saunders and Gertjan Vlieghe, who suggested that another delay to leaving the EU might mean lower interest rates.

US announced late Friday that “very substantial phase one deal” was made with China. It would take up to five weeks to put the agreement into words, possibly for signing at the APEC Chile summit on November 16-17. The deal covered intellectual property and financial services. Also, Trump said it’s a “tremendous deal for the farmers”, with purchase of around USD 40B to USD 50B worth of agricultural purchases. The amount would be 2.5 to 3 times of what China has purchased at its highest point thus far.

On the other hand, US will delay the planned escalation of tariffs on USD 250B in Chinese imports to imports, supposed to take effect on October 15. Nevertheless, further 15% of tariffs an essentially all Chinese imports could still start on December 15, unless the second phase could be agreed.

The development is undoubtedly a positive sign to the markets, in the sense that escalation is temporarily halted. But firstly, it’s unsure whether China would do another U-turn again on the texts. Secondly, the imposed tariffs are still in place. Third, many of the core issues are not addressed yet, including forced technology transfer. More importantly, subsidies to state-owned enterprises are the key elements in the planned economy, state capitalism model of China. It’s generally seen as the fundamental principle that China won’t compromise on.

Hence, if Trump is truly insisting on a real and comprehensive trade deal with China, we’re not seeing much chance of a breakthrough ahead to revert all tariffs to the pre-trade war era. Unless he finally backs down.

Important week for Sterling, Canadian and Australian Dollars ahead

On economic data front, it’s a big week for Sterling, Canadian and Australian Dollar. UK will release employment, inflation and retail sales. The Pound was boosted strongly by Brexit optimism last week. It’s ready for further rally in case of more positive Brexit news and strong data. Similarly, Canadian Dollar was boosted by strong job data, which lowered the chance of a BoC rate cut. Canadian CPI is another factor to secure such expectations.

Domestically, Aussie will face the test from RBA minutes, and more importantly employment data. The chance for another RBA rate cut next year, and even QE, would heavily dependent on whether unemployment rate would turn down again. Meanwhile, Aussie will also look into data from China, including trade balance, GDP and industrial production, etc.

No change in AUD/USD’s outlook. The corrective rise from 0.6670 might extend higher. But upside should be limited by 0.6894 resistance to bring down trend resumption. On the downside, break of 0.6710 minor support will turn bias back to the downside for retesting 0.6670 low. 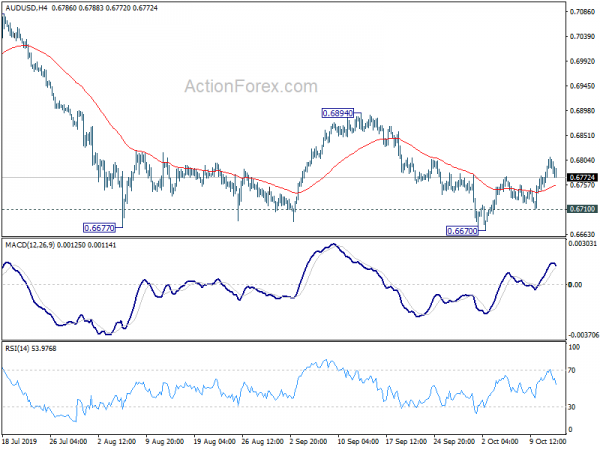 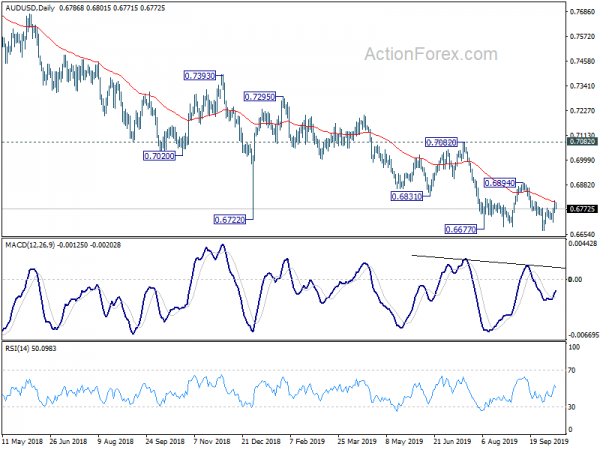