Yen, Swiss Franc and Dollar continue to regain some grounds today as markets reassess US-China trade negotiations developments. New Zealand Dollar, Sterling and Australian Dollar are generally softer too. But overall trading is rather subdued with Japan, US and Canada on holiday. Today’s price actions are, for now, generally seen as consolidative. That is, Sterling strength and Yen weakness are expected to resume after traders are back.

Technically, some consolidations are likely in Sterling pairs for now. But GBP/USD’s retreat should be held well above 1.2195 support. GBP/JPY should be held well above 130.42 support. EUR/GBP should be capped well below 0.9019 resistance. EUR/USD and AUD/USD are two pairs to watch ahead. Both are seen as in corrective recoveries, which appear to lose upside momentum. Break of 1.0941 support in EUR/USD and 0.6710 support in AUD/USD should bring retest of recent lows.

US Mnuchin: If there is no trade deal with China, tariffs would go in place

US Treasury Secretary Steven Mnuchin told CNBC today that he expected President Donald Trump and Chinese President Xi Jinping will be able to finish the trade agreement during their anticipated meeting in Chile on November 16-17. He also echoed Trump’s comments last week and said recent round of discussions covered intellectual property rights, financial services including currency and foreign exchange, and “very significant structural issues” dealing with agriculture. Though, Mnuchin also warned, “I have every expectation if there’s not a deal those tariffs would go in place”, referring to the next round of tariffs scheduled to mid-December.

On the other hand, Chinese media sounded much less enthusiastic, as Trump. On Sunday, China Daily said, “while the negotiations do appear to have produced a fundamental understanding on the key issues and the broader benefits of friendly relations, the Champagne should probably be kept on ice, at least until the two presidents put pen to paper.” It also warned, “as based on its past practice, there is always the possibility that Washington may decide to cancel the deal if it thinks that doing so will better serve its interests.”

Separately over the weekend, ECB policymaker Robert Holzmann complained that the current ECB monetary policy is “wrong” and “a different policy is needed in the future”. He added that ECB should think about lowering inflation target, temporarily, from 2% to 1.5%. Also, “I am convinced that she has heard the dissenting voices, that she will take them seriously and will try to find a new approach here.”

Germany’s Economy Ministry said “the export-oriented German industry is facing weak global trade, stagnating global manufacturing and falling demand for cars.” However, “a stronger slowdown or a pronounced recession are not to be expected at the moment”. Instead, “the German economy remains in stagnation. Economic activity is stuck at the existing level.”

So far, growth in services and construction has largely offset the recession in manufacturing sector. But, considering recent indicators, there are increasing signs of spill over, which could further drag the labor market overall.

The government is expected to publish new economic forecasts this week. In April, it predicted growth of 0.5% for 2019 and 1.5% for 2020. There is some room for downside recession in 2020’s figure.

No change in EUR/USD’s outlook as corrective recovery from 1.0879 could still extend. But upside should be limited by 1.1109 resistance to bring down trend resumption. On the downside, break of 1.0941 minor support should confirm completion of the recovery and turn bias to the downside for retesting 1.0879 low first. However, firm break of 1.1109 will be an early sign of medium term bottoming and target 1.1412 key resistance next. 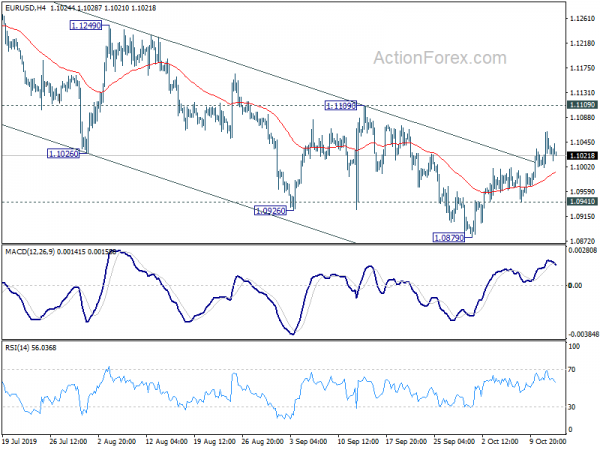 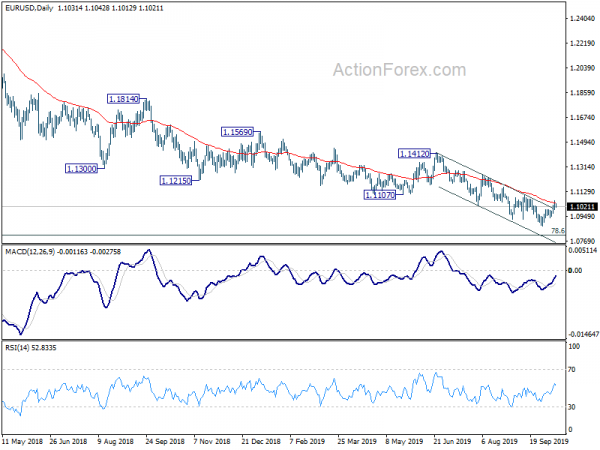