Sterling Softens ahead of Brexit Vote, Canadian Dollar Weighed Down by Retail Sales

Canadian Dollar turned mixed as the brief lift from election results faded. Instead, the Loonie is under mild selling pressure after poor retail sales data. Nevertheless, Sterling is the weakest one for today as traders turn cautious ahead of vote on Brexit and bill time table. Pull back in the Pound also drags down Euro and Swiss Franc. On the other hand, Yen is recovering notably following weakness in German and US treasury yields. Dollar and New Zealand Dollar trail.

Technically, as noted earlier today, Dollar has been losing downside momentum as seen in EUR/USD, AUD/USD, GBP/USD and USD/CHF. Some levels will be watched to decide whether Dollar could confirm bottoming for sustainable rebound. The levels include 1.1062 minor support in EUR/USD, 1.2749 support in GBP/USD, 0.6810 in AUD/USD and 0.9904 resistance in USD/CHF.

In other news from Canada, Justin Trudeau is expected to cling on to power as Prime minister after his Liberal Party won 156 seats in the federal elections, versus Conservatives’ 95 seats. That was a blow to the Liberals as they lost 21 seats, and short of 170 seats majority. But the Liberals could still easily form a minority government with support from left-leaning parties.

Tusk: EU to decide on Brexit extension in the coming days

European Commission President Jean-Claude Juncker complained that “in truth it has pained me to spend so much of this mandate dealing with Brexit when I have thought of nothing less than how this union could better do for its citizens – waste of time and waste of energy,”

He added, “we need now to watch events in Westminster very closely, but it’s not possible, not imaginable that this parliament would ratify the agreement before Westminster has ratified the agreement. First London, then Brussels and Strasbourg”.

European Council President Donald Tusk said today that he was already discussion UK’s Brexit extension request with E27 leaders. And decision would be made “in the coming days”. He added that “a no-deal Brexit will never be our decision.”

UK Prime Minister Boris Johnson’s Brexit deal will come back to the Commons today, after twice being denied a vote. A vote on Second Reading, the general principle of the Withdrawal Agreement Bill, is expected to be held at around 1900GMT. After that, a vote on Program Motion will be held shortly after, for the timetable for the bill’s passage.

The first vote would be the real moment of truth for Johnson. If he’s defeated there, the bill is dead. Though, it’s currently generally believed that Johnson would get a very narrow win. The second vote is about the timing of Brexit. The government is trying to push through a Third reading this Thursday, so as to meet the Oct 31 Brexit deadline. It’s highly doubtful if MPs would support this accelerated schedule. If not, another Brexit delay is inevitable.

China Ministry of Industry and Information Technology (MIIT) spokesman said “we will look at the trade friction between China and the United States with an open mind and a big heart.” And, “we will not blindly emphasize ‘self-reliance’, and not decouple from the development of international industries.”

Separately, Vice Foreign Minister Le Yucheng said that “as long as we respect each other and seek equal cooperation, there are no disagreements that cannot be resolved between China and the United States.” He also emphasized, “What China wants is to deliver a better life for the Chinese people. We don’t want to take anything from anyone else. There’s no such thing as China replacing anyone or threatening anyone.” 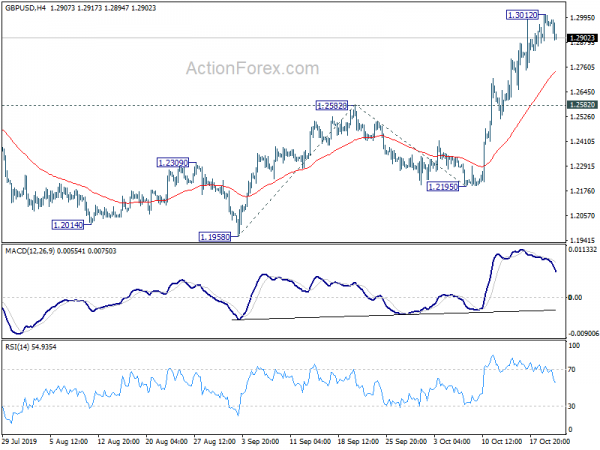 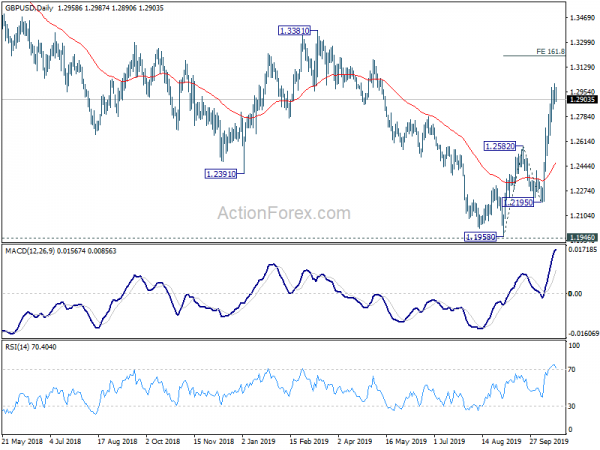