Euro Softer in Consolidations ahead of Draghi’s Last ECB Meeting

Consolidative trading continues in the forex markets as major pairs are crosses are stuck in tight range. Yen weakened mildly overnight but there was no follow through selling through recent highs. European majors are also mildly softer, without sustainable decline. ECB meeting is a focus today but it will very likely be a non-event. Instead, the economic data would be the drivers, including Eurozone PMIs and US durable goods orders.

Technically, EUR/GBP would be one today watch today as consolidation from 0.8575 temporary low is about to complete. Break of this support will resume larger fall from 0.9324 to 0.8472 support next. On the other hand, EUR/AUD seems to have draw solid support from 1.6203 support. Further recovery would retain near term bullishness through 1.6432 resistance. But firm break of 1.6203 a sign of near term bearish reversal, for 1.5905 support. Price actions in these two crosses could be quick tricky.

Euro follows other European majors and is trading generally lower this wee. Focus turns to Mario Draghi’s last monetary policy meeting as ECB President today. After the stimulus package announced last month, no new measure is expected this time. Instead, Draghi could make use of the opportunity to defend the latest policy changes. In particular, the minutes for the September meeting revealed that the members were divided over QE resumption. This not only would be the focus in the Q&A session, but also a legacy left to the incoming president, Christina Lagarde.

No EU decision on Brexit extension until Friday

EU27 is said to be generally supportive to giving UK another Brexit extensions. But there are some minor differences on the duration. A final decision might not be made until Friday. The question is on whether to follow European Council President Donald Tusk’s recommendation of a three-month delay through a “written procedure”. Or, leaders would likely to France’s idea of a shorter extension, possibly to November 15 only.

In UK, Prime Minister Boris Johnson failed to agree on a timetable for the Brexit bill with Labour leader Jeremy Corbyn yesterday. Johnson could opt for a general election if the parliament is seen as unwilling to vote for the Brexit deal. But it’s reported that his own Conservative party is 50/50 split on the idea of election. Meanwhile, Corbyn is also said to be facing significant pressure from Labour to resist any call for an imminent election.

Australian CBA PMI Manufacturing dropped to 50.1 in October, down from 50.3. CBA PMI Services dropped sharply from 52.4 to 50.8. PMI Composite dropped from 52.0 to 50.7. The reading suggested subdued business conditions at the start of Q4. Output rose at a softer pace amid the weakest new order growth since April. Business confidence also softened and firms raised their staffing levels only marginally. Meanwhile, input costs continued to increase at a marked pace, leading firms to raise their own selling prices to the greatest extent since last November in a bid to protect profit margins.

CBA Chief Economist, Michael Blythe said: “The trade war and other uncertainties mean businesses are deferring capex and consumers are putting off spending. The resulting drop in production has pulled global manufacturing PMIs lower, taking services PMIs along for the ride. Australian manufacturing and service firms are not immune to these global trends. The ongoing weakness in the flash PMI readings for October should be judged against this global backdrop. Australia is faring a little better than the global trend. PMI readings remain in expansion territory, albeit just. Employment is still growing and longer-run expectations are still positive”.

Eurozone PMIs will be major focus in European session. Later in the day, US will release jobless claims, durable goods orders, PMIs and new home sales. 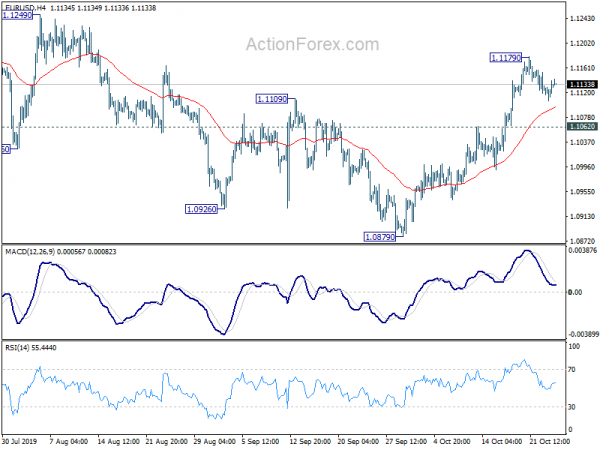 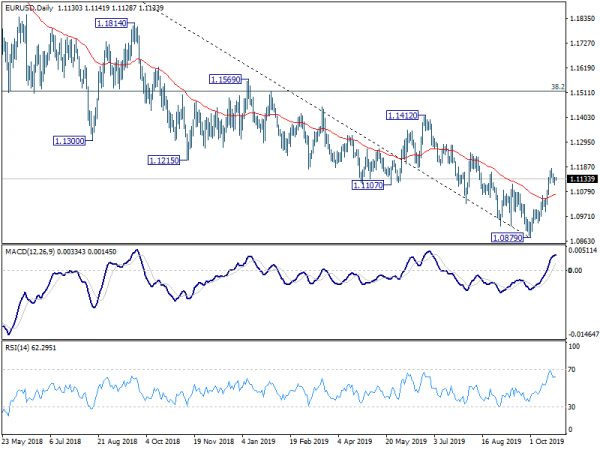