Dollar stays soft in Asian session today as markets await non-farm payrolls and ISM manufacturing data. Yen and Swiss Franc follow as next weakest. On the other hand Aussie and Kiwi are the strongest ones so far, both are lifted mildly by slightly better than expected Chinese data. For the weak, Canadian Dollar is the weakest one followed by Dollar. New Zealand and Australian Dollars are the strongest.

Technically, 1.1179 resistance in EUR/USD will be a focus today. Break will indicate resumption of rise from 1.0879 low. That could trigger more broad based selloff in the greenback. Similarly, focus will also be on 1.3012 resistance as well as 0.9841 support in USD/CHF.

Australia AiG Performance of Manufacturing Index dropped -3.1 pts to 51.6 in October (seasonally adjusted), down from 54.7. The result suggests much slower growth in the sector. In trend terms, three of the six sectors are in contraction, metal products; TCF, paper & printing; building materials, woods, furniture & other. Employment index dropped -4.8 to 52.8, indicating slower expansion, but stays above long-run average of 48.9. Average wages index dropped -4.5 pts to 59.3, just above long-run average of 59.2.

Japan PMI Manufacturing was finalized at 48.4 in October, down from 48.9 in September. That’s also the lowest level in nearly three-and-a-half year. Markit noted that manufacturers were under pressure amid weaker demand. Production fell for the tenth month in a row. Also, firms reduced output charges in bid to stimulate sales.

Joe Hayes, Economist at IHS Markit, said: “Although the impact of the typhoon will have temporarily interrupted factory operations in October, panellists reported unfavourable underlying conditions across both domestic and external markets. As such, downside risks to Japan’s manufacturing economy are clearly excessive. With weak regional growth across Asia and signs of fragility within the domestic economy, it is difficult to see any respite coming in the near-term.”

China Caixin PMI Manufacturing rose to 51.7 in October, up from 51.4 and beat expectation of 51.0. Looking at some details, new orders expanded at the quickest rate since January 2013. Output growth accelerated to solid pace. Outstanding work rose further. But employment declined again.

Zhengsheng Zhong, Director of Macroeconomic Analysis at CEBM Group said: “China’s manufacturing economy continued to recover at a relatively quick pace in October. New orders placed with companies improved substantially, and new export orders rose at the fastest pace since the Sino-U.S. trade war broke out. However, business confidence has been weak. Deliveries of inputs were further delayed. Inventory activities were subdued. The employment sector continued to contract. If the improvement in demand, including that generated by infrastructure projects and exports, is able to continue, the manufacturing sector can gradually build a foundation for stability.”

US non-farm payrolls will be a major focus today. Markets are expecting US economy to have added 105k jobs in October. Unemployment rate is also expected to edge higher from 3.5% to 3.6%. Average hourly earnings are expected to grew 0.3% mom. Looking some other related data, ADP employment grew 125k, largely in-line with expectations. Four-week moving average of initial jobless claims rose slightly from 212.5k to 214.75k. Conference Board consumer confidence dropped from 126.3 to 125.9, but remained high. 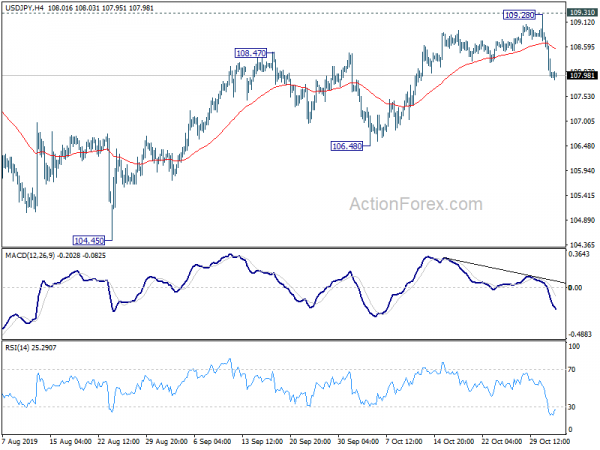 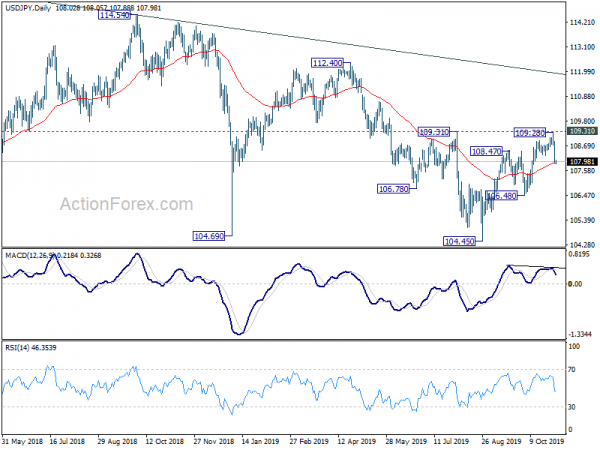