Yen and Swiss Franc remain the weakest ones for today, following strong rally in global stocks. US indices would likely extend the record run, as futures suggest. German and US benchmark yields also climb a bit higher. back in the forex markets, though, Dollar recover mildly as there is no follow through selling to push it though near term support levels against others. Overall, major pairs and crosses are in consolidative mode.

Technically, EUR/USD, GBP/USD and AUD/USD retreat ahead of 1.1179, 1.3012 and 0.6929 temporary tops respectively. Consolidations are likely extending with another fall. USD/CHF also recovers ahead of 0.9841 key near term support again. USD/JPY is pressing 4 hour 55 EMA and break will put focus back to 109.28/31 resistance zone.

Sentix said that the indices “give hope that a deeper recession can be averted in the eurozone”. The turnaround in ECB’s monetary policy has been “well received” by investors. It’s also measuring a stronger rise in money supply aggregates again, which usually has a “stimulating effect” on the economy. Growth is also expected to be supported by “higher government spending”.

For Germany, the Overall Index rose to -6.5, up from -19.4. Current Situation Index rose from -18.0 to -8.3.l Expectations Index rose from -20.8 to -4.8, also highest since May. “Since the trend reversal that is now becoming apparent is also being led by the Asia ex Japan region, the hope that the slide into recession can be averted is also nourishing hope for the German economy”.

Eurozone PMI manufacturing finalized at 45.9, stuck in its steepest decline for seven years

Eurozone PMI manufacturing was finalized at 45.9 in October, up from September’s 45.7. Markit noted sustained weakness in output, new orders and purchasing. Also, job shedding accelerated to the sharpest since start of 2013. Looking at some member states, Germany reading recovered 42.1 but stayed well below 50. Spain dropped to 78-month-of 46.8. Italy dropped to 7-month low of 47.7. France recovered to 50.7.

Chris Williamson, Chief Business Economist at IHS Markit said: “Eurozone manufacturing remained stuck in its steepest decline for seven years in October, meaning the goods producing sector is on course to act as a severe drag on GDP again in the fourth quarter. The survey data are consistent with industrial production falling at a quarterly rate in excess of 1%…. “The severity of the downturn, alongside poor trends in employment and prices is especially disappointing given the ECB’s recent stimulus measures, underscoring how new ECB head Christine Lagarde is taking over the reins at a particularly difficult juncture for the eurozone economy.”

UK PMI Construction rose to 44.2 in October, up from 43.3, beat expectation of 44.0. Markit said civil engineering declines at fastest pace since October 2009. New orders and employment continue to decrease. Business expectations for the year ahead remain subdued.

Tim Moore, Economics Associate Director at IHS Markit, said: “Civil engineering was the worst-performing area of activity in October, with business activity dropping at the fastest pace in ten years… House building has also lost momentum this autumn amid a broader slowdown in market conditions, with the latest survey data signalling the sharpest drop in residential work since June 2016. There are clear signs that construction firms are positioning for an extended soft patch for project starts, as highlighted by a further decline in purchasing volumes and another month of cuts to workforce numbers through the non-replacement of voluntary leavers.”

Swiss SECO Consumer Climate dropped to -10.4 in Q4, down from -8.0, missed expectation of -8.0. SECO said: “Consumer sentiment has worsened slightly. Consumers have proved less optimistic about both general economic development and the labour market than in previous quarters.”

Looking at some details, expectations regarding general economic development have deteriorated significantly, from -0.9 to -19.6. That’s also the first time in more than three years that the index is below it’s long term average (-9). Overall, these results point to weak economic development in the near future.

Australia retail sales rose 0.2% mom in September, below expectation of 0.4% mom. Ben James, Director of Quarterly Economy Wide Surveys, said there was “mix of results at the industry level”.

Rises were seen in other retailing (0.8%), cafes, restaurants and takeaway services (0.6%), and food retailing (0.1%). These rises were slightly offset by a fall in clothing, footwear and personal accessory retailing (-0.5%) and department stores (-0.2%). Household goods (0.0%) was relatively unchanged.

Overall the report suggested weak consumer spending through Q3 and there was little lift from tax refunds. Some greater fiscal stimulus would be needed to boost wage growth and spending. And without that, another RBA cut early next year would be likely and necessary.

New Zealand Treasury said in its monthly report that economic growth was “weaker than forecast” in the June quarter. Business activity “remained weak” in the September quarter and is expected to have weighed on domestic growth. Inflation was “stronger than expected” but a “slowing economy poses downside risk to forecasts”.

Treasury also said the nominal neutral interest rate (NIR) has been falling over time in many developed nations, including New Zealand. It revised down the terminal nominal NIR assumption from 3.75% to 3.0%. And, “a lower NIR assumption implies low interest rates have less stimulatory power than previously assumed”.

Intraday bias in USD/JPY remains neutral for the moment and stronger recovery could be seen. But outlook is unchanged that considering bearish divergence condition in 4 hour MACD, a short term top should be formed. Upside of recovery should be limited below 109.28/31 resistance to bring fall another decline. On the downside, below 107.88 will target 106.48 support. break will confirm completion of whole rebound from 104.45 and target retest of this low. However, decisive break of 109.31 will be an early sign of medium term reversal and target 112.40 resistance next. 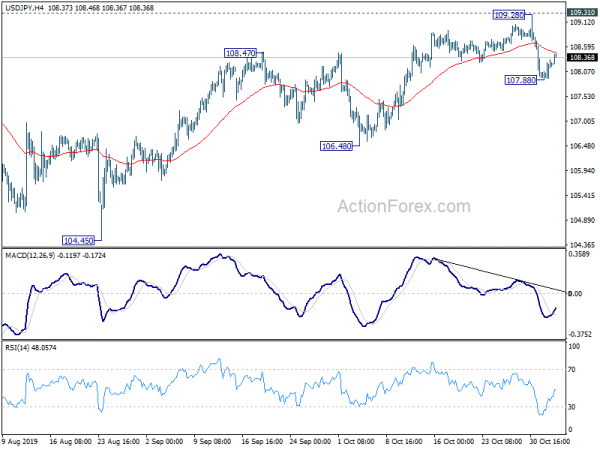 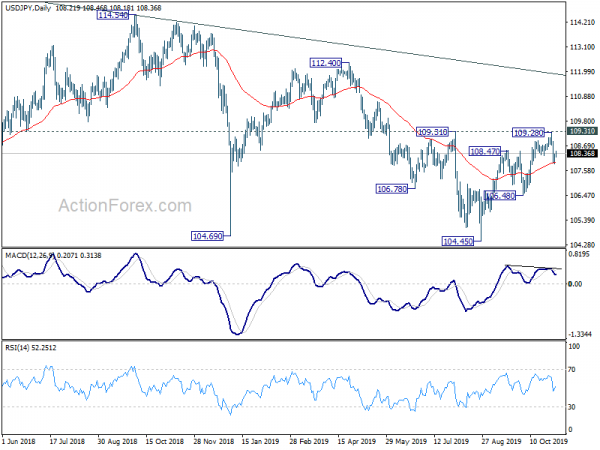