Sterling drops broadly today after two BoE policy makers surprisingly voted for a rate cut, even though the central eventually stood pat. Following the Pound, Yen is the second weakest as risk appetite returns. Market sentiments were lifted after China said they agreed on phased rollback of tariffs with US for phase one trade agreement. Australian Dollar is currently the strongest one, followed by Canadian.

Technically, while the Pound weakens today, GBP/USD, GBP/JPY and EUR/GBP are still considered in consolidation pattern. Selloff in GBP/USD and GBP/JPY should be contained above 1.2582 and 135.74 support respectively. EUR/GBP’s rebound should also be limited below 0.8811. While USD/JPY and EUR/JPY rebounds, they’re still bounded below 109.28 and 121.46 temporary tops. more consolidations could be seen before a breakout.

BoE left Bank Rate unchanged at 0.75% as widely expected while asset purchase target is held at GBP 435B. However, the vote on policy rate was no unanimous, by 7-2. Two members (Jonathan Haskel and Michael Saunders) voted against the proposition, preferring to reduce Bank Rate by 25 basis points to 0.50%.

However, the accompanying statement still noted that provided that risks on Brexit and global growth do not materialize, and the economy recovers broadly in line with latest projections, “some modest tightening of policy, at a gradual pace and to a limited extent, may be needed to maintain inflation sustainably at the target.”

The path of Bank Rate implied for forward market interest rate would drop from 0.7% to 0.5% in 2020 Q4, and stay there throughout the projection horizon.

In the latest economic projections released today, European Commission downgraded growth forecasts as “the external environment has become much less supportive and uncertainty is running high”. And, this is “particularly affecting the manufacturing sector, which is also experiencing structural shift”. European economy looks to be “heading towards a protracted period of more subdued growth and muted inflation.”

Valdis Dombrovskis, Vice-President said: “We could be facing troubled waters ahead: a period of high uncertainty related to trade conflicts, rising geopolitical tensions, persistent weakness in the manufacturing sector and Brexit.” Pierre Moscovici, Commissioner for Economic and Financial Affairs, Taxation and Customs, said: “The challenging road ahead leaves no room for complacency. All policy levers will need to be used to strengthen Europe’s resilience and support growth.”

ECB Monthly Bulletin noted that global survey indications suggest “subdued” economic activity, “but stabilizing”. Risks to global outlook “remain to the downside” amid a “further escalation of trade disputes, high uncertainty related to Brexit and a potentially slower recovery in a number of emerging market economies.” Also, global trade momentum is “expected to remain muted”, as higher tariffs are set to come fully into effect at the end of the year.

China said to have agreed plan to reverse tariffs with US

Market sentiments are once again lifted by upbeat news regarding US-China trade negotiations, as China said they’ve agreed with the US on a plan to reverse the tariffs imposed.

“If China, U.S. reach a phase-one deal, both sides should roll back existing additional tariffs in the same proportion simultaneously based on the content of the agreement, which is an important condition for reaching the agreement.”

US initial claims dropped to 211k, below expectation of 215k

Also released, AiG Performance of Construction index rose to 43.9 in October, up from 42.6. The data reflected less pronounced reductions in activity, new orders and employment. However, highlighting the subdued overall state of business conditions, deliveries from suppliers declined at a steeper rate in the month. 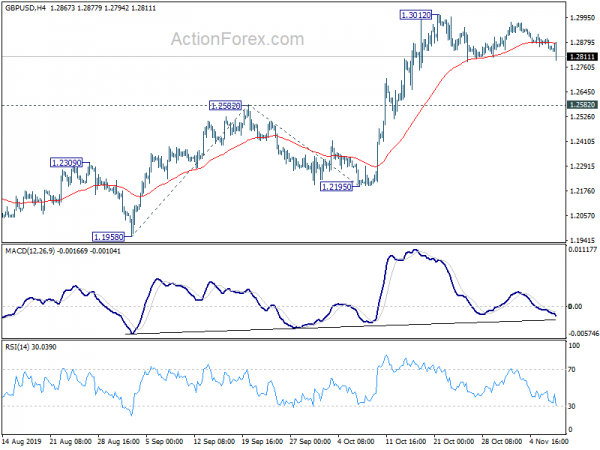 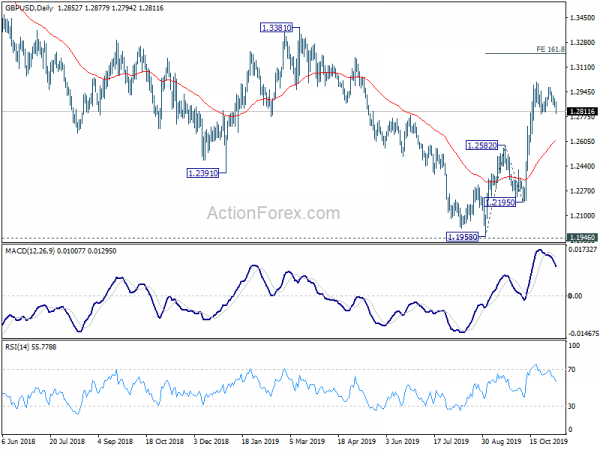