Dollar Strong on Trade and Rebound in Treasury Yields

The forex markets are pretty steady in Asian session today, staying inside yesterday’s range. Over the week, Euro is currently the weakest one on poor economic outlook, with downgrades by European Commission. New Zealand dollar is second weakest after rise in unemployment rate. Sterling is the third weakest as two BoE officials unexpected voted for a cut yesterday, despite the central bank’s hold. Dollar is the strongest one, lifted by trade optimism and rebound in treasury yields. 10-year yield took out 1.9 handle rather decisively overnight and could be heading back to 2% handle. Canadian and Australian Dollars are next strongest.

Technically, USD/JPY’s break of 109.31 resistance is taken as another sign of medium term bullish reversal. We’ll see if it could sustain and close the week above this structural resistance. EUR/USD should have completed the rebound from 1.0879 low and is heading back to this level. USD/CHF’s breach of 0.9970 resistance is taken as the first sign of rally resumption and focus is back on 1.0027. Now, to further affirm Dollar strength, USD/CAD should take out 1.3208 temporary top to resume rise from 1.3042.

US Kudlow said there will be tariffs concessions with China, but Navarro said no agreement yet

The messages regarding rollback of imposed tariffs as part of the phase one US-China trade agreement were rather confusing and conflicting. White House economic adviser Larry Kudlow told Bloomberg, “if there’s a phase one trade deal, there are going to be tariff agreements and concessions.”

However, another White House adviser Peter Navarro told Fox Business Network: “There is no agreement at this time to remove any of the existing tariffs as a condition of the phase one deal.” And China was just “negotiating in public”, trying to push this in a direction with their “propaganda press.” White House spokeswoman Stephanie Grisham just said “I cannot get ahead of the talks with China, but we are very, very optimistic that we will reach a deal soon”.

Yesterday, China Ministry of Commerce spokesman Gao Feng said “both sides have agreed to cancel additional tariffs in different phases, as both sides make progress in their negotiations.”

China trade surplus widened to USD 42.8B, much less than expected exports contraction

Atlanta Fed President Raphael Bostic said consumers are “staying pretty rock solid” and labour market maybe a “bit beyond full employment. And currently monetary is already “accommodative”. He could have dissented the latest rate cut if had a vote on monetary policy.

Bostic added that “I do think that the economy today is on solid footing and is likely to remain so. I am fairly comfortable standing pat with policy and strongly favor weighing the incoming data, both macro and micro, over the coming months before deciding on any further adjustments.”

Negative impacts from the prolonged trade war with China remained modest. “Many businesses that we’ve talked to basically said we’re not going to pass that on, so we have not seen consumers face the tariffs,” he said. “When we do, that will be a new phase of the tariff war.”

In the Monetary Policy Statement, RBA said the economy is “gradually coming out of a soft patch” with GDP growth recovering. Outlook is largely unchanged from three months again, supported by low interest rates, tax cuts, ongoing infrastructure spending and upswing in house prices. Labor markets “has been resilient”, but unemployment will still be “somewhat short of” estimated full employment rate of around 4.5%. Inflation remains “low and steady”, and it’s expected to pick up “only gradually”.

RBA also noted that the board was “mindful that rates were already very low and that each further cut brings closer the point at which other policy options might come into play.” And, further easing could “unintentionally convey an overly negative view of the economic outlook”. After three rate cuts this year, RBA stood pat in November, and this “allows time to assess the effects of the recent easing of monetary policy as well as global developments.” But the central also pledged it’s “prepared to ease monetary further if needed”.

Swiss will release unemployment rate. Germany and France will release trade balance. Later in the day, Canada job data will take center stage while housing data will also be featured. US will release U of Michigan consumer sentiment. 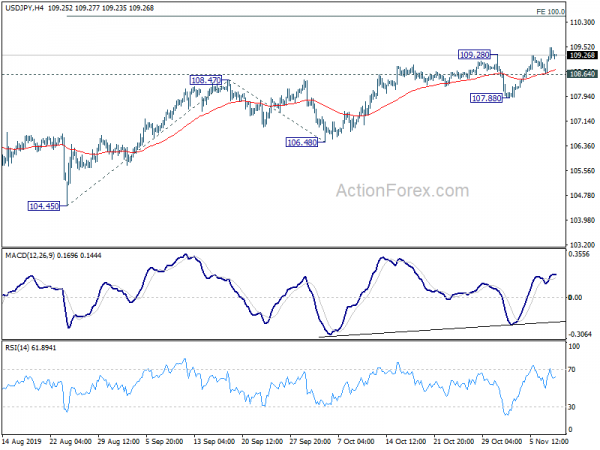 In the bigger picture, strong support was seen from 104.62 again. Break of 109.31 should confirm completion of fall fro m112.40 and bring retest of this key resistance. Decisive break there should confirm completion of whole corrective decline from 118.65 (Dec 2016 high). However, rejection from 112.40 will keep medium term outlook bearish for at least another test on 104.45. 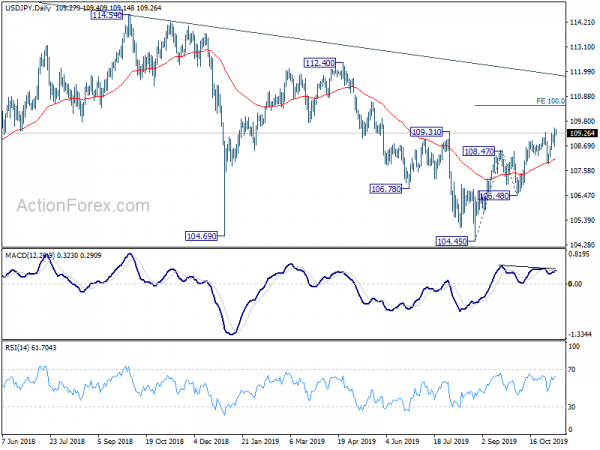