Markets turn into consolidative mode today as Dollar, Yen and Swiss Franc pare back some gains. Commodity currencies, on the other hand, are generally higher. Traders are taking some profits ahead of weekly close. Nevertheless, over the week, New Zealand Dollar is the strongest ones after RBNZ’s surprise hold. Swiss Franc, Yen are firmer on risk aversion in Asian and Europe. Sterling is very resilient, or more so indifferent to all developments. Aussie and Canadian are among the weakest.

Technically, USD/CAD’s rebound lost momentum after hitting 1.3270 and turned into consolidations. Further rise is still in favor as long as 1.3159 support holds, for 1.3347/82 resistance zone. EUR/USD also formed a temporary low at 1.0989 and turned into consolidation. But further fall is expected as long as 1.1073 resistance holds, for 1.0879 low.

Fed Vice Chair Richard Clarida said in a speech that the US economy is “operating at or close to maximum employment and price stability.” But, “although the labor market is robust, there is no evidence that rising wages are putting excessive upward pressure on price inflation”. Wages growth is “broadly in line with productivity growth and underlying inflation”.

WH Kudlow: We’re getting close to trade deal but it’s not done yet

White House economic adviser Larry Kudlow said yesterday that “we’re getting close” to the phase one trade deal with China. And, “the mood music is pretty good, and that has not always been so in these things.” But he added that “it’s not done yet” even though “there has been very good progress and the talks have been very constructive.”

China has resumed significant purchase of US products since October 11, when President Donald Trump announced the place for the phase one deal. Both sides have also lifted ban of poultry imports this week. US Trade Representative Robert Lighthizer said “this is great news for both America’s farmers and China’s consumers”.

New Zealand BusinessNZ Performance of Manufacturing Index improved drastically to 52.6 in October, up from 48.8. It’s now back in expansion after three months of contraction from July to September. Production rose notably from 46.6 to 52.6. New Orders also jumped from 50.9 to 56.2. But Employment stayed sluggish, up from 50.1 to 50.2.

BusinessNZ’s executive director for manufacturing Catherine Beard said: “After a five month period of both lacklustre and negative growth, the pick-up in both new orders and production put the sector back on track. If the remaining two months for 2019 are to keep up the momentum, it is important these key sub-indexes remain positive to finish the year on a more upbeat note.

However, BNZ Senior Economist, Doug Steel said that “the October PMI is hardly what you would call strong. But it is certainly much better than the previous three months where the index languished below 50 which indicated a sector going backwards”.

USD/CAD formed a temporary top at 1.3270 and retreated. Intraday bias is turned neutral for some consolidations first. Downside should be contained by 1.3159 minor support to bring another rally. Above 1.3270 will turn intraday bias to the upside and extend the rise from 1.3042 to 1.3347/82 resistance zone. However, break of 1.3159 will indicate completion of the rebound and turn bias back to the downside for 1.3042 support. 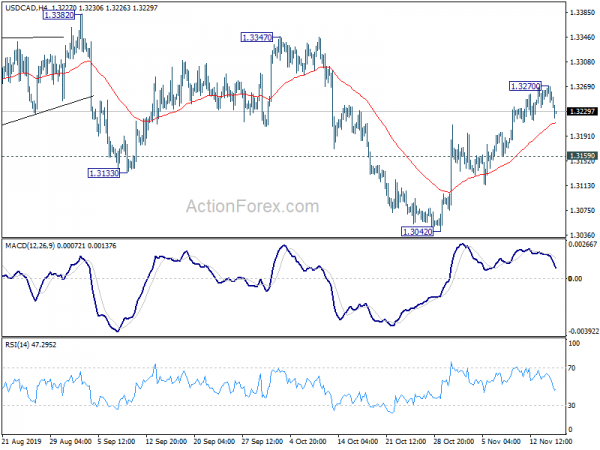 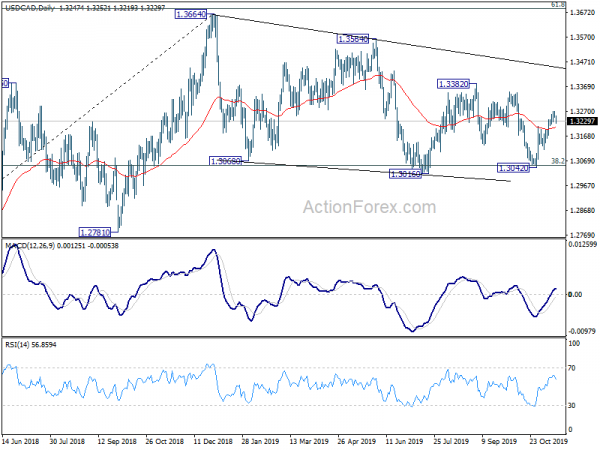