Risk appetite extended from last week’s strong US close into Asian session. Markets cheer the “constructive” US-China trade talks while ignoring escalation in unrest in Hong Kong. Yen is currently one of the weakest together with Swiss Franc. Though, Australian Dollar is also soft among them. On the other hand, Sterling and Euro firm up, with the help from mild softness in Dollar. In particular, the Pound is gearing momentum for an upside breakout as election campaign steps up.

Technically, EUR/GBP’s decline from 0.9324 is on track to 0.8472 support. With today’s rally in Sterling, focuses will be on 1.3012 in GBP/USD and 141.50 in GBP/JPY. Break of two resistance levels will confirm rally resumption and could prompt further Pound buying elsewhere. EUR/USD and EUR/JPY will be looking at 1.1073 and 120.63 minor resistance levels. Break will revive near term bullishness for tests on 1.1175 and 121.46 resistance respectively.

US and China held constructive phone call on trade

A phone call was held between Chinese Vice Premier Liu He, US Trade Representative Robert Lighthizer and Treasury Secretary Steven Mnuchin on Saturday morning. The Chinese Ministry of Commerce said “constructive” discussions about each side’s core concerns regarding the phase-one trade deal were held. Both sides agreed to stay in close communications. It’s also reported that both sides have held working-level video calls on details and timeline of China’s agricultural purchases.

Separately, US President Donald Trump hailed that “Our great Farmers will receive another major round of ‘cash,’ compliments of China Tariffs, prior to Thanksgiving.” “The smaller farms and farmers will be big beneficiaries. In the meantime, and as you may have noticed, China is starting to buy big again. Japan deal DONE. Enjoy!”

For now, there is no indication on when the phase-one trade deal would be completed and signed.

UK Prime Minister Boris Johnson is set to speak to business leaders at the CBI’s annual conference in a bid in the election campaign. According to advance extracts, he will say
“with a Conservative majority government you can be sure we will Get Brexit Done and leave with the new deal that is already agreed – ending the uncertainty and confusion that has paralyzed our economy,

Johnson will also said “Britain stuck in gridlock and our economy stuck in first gear. Extension to extension. Marching business up to the top of the hill, only to march them down again.”

On the data front, Canadian CPI and retail sales will catch a lot of attention too, after recent dovish turn of BoC. Eurozone PMIs, Australia PMIs and Japan CPI will also be featured.

With today’s strong rally, focus is now on 141.50 resistance in GBP/JPY. Decisive break there will confirm resumption of rise from 126.54. Intraday bias will be turned to the upside for trend line resistance (now at 144.09). For now, near term outlook will remain bullish as long as 139.36 support holds. However, break of 139.36 will turn bias to the downside for deeper pull back to 135.74 resistance turned support. 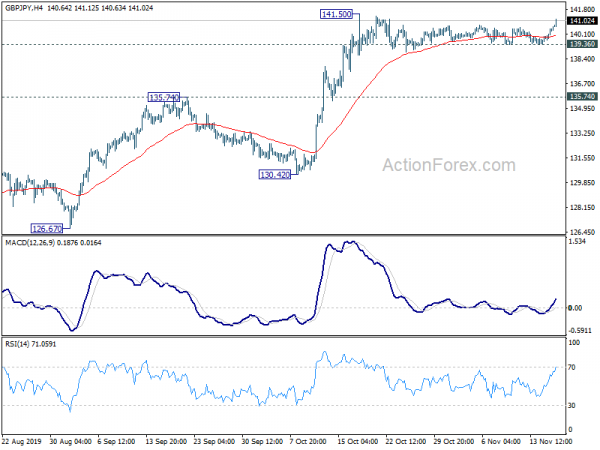 In the bigger picture, consolidation pattern from 122.75 (2016 low) is still in progress with rise from 126.54 as the third leg. Further rise should be seen back to 148.87/156.59 resistance zone. For now, we’d expect strong resistance from there to limit upside. And, this will remain the favored case as long as 135.74 resistance turned support holds. 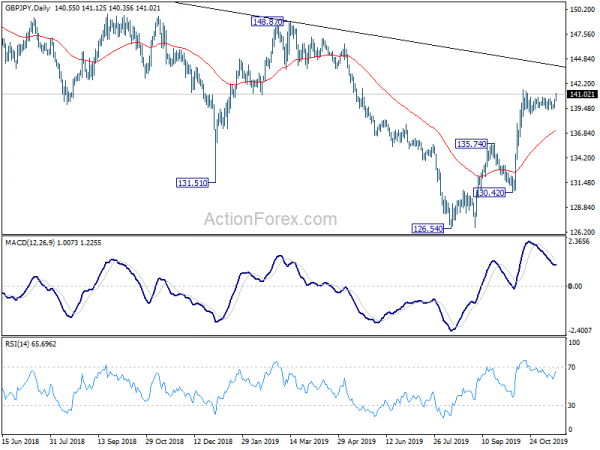