Sentiments remain generally cautious in Asian session today. Major indices are mixed following slight weakness in US stocks overnight. The Pound failed to break through near term resistance against Dollar for the second time and retreated. Euro’s rebound against Dollar also lost momentum. Canadian Dollar recovered after BoC Governor Stephen Poloz said monetary policy was “about right”. But there is no clear directions in the forex markets overall. Focus will turn to PMI data from Eurozone, UK and US, as well as Canada retail sales for guidance.

Commenting on the Commonwealth Bank Flash PMI data, CBA Chief Economist, Michael Blythe said: “Activity in the key manufacturing and services sectors continues to bounce around the 50 line that separates expansion from contraction. This is a particularly disappointing result when benchmarked against interest rate cuts, tax cuts, rising house prices and a still solid labour market”.

“Readings on new orders and employment offer a glimmer of positive news. But the challenges faced by Australian businesses are evident in the accelerating growth in input prices and the slowing trend in output prices. Competitive pressures and weak demand are taking a toll”.

Joe Hayes, Economists at IHS Markit, noted: October PMI data was difficult to interpret as a result of the temporary negative shocks by the sales tax and typhoon. However, we can deduce from the November PMI data that there is a strong possibility of Japan’s economy contracting in the fourth quarter. We have seen little rebound following these temporary factors, especially in the service sector where the impact of the tax rise and poor weather was most prominent:.

Japan CPI core edged up to 0.4%, well below BoJ’s target

The inflation subdued inflation reading suggests that the sales tax hike in the month had little impact on prices, and is unlikely o derail consumer spending. Yet the core inflation reading remains well below BoJ’s 2% target. The central will need to maintain ultra-loose monetary policy for a prolonged period. But even so, there is little evidence to show that inflation could sustainably hit the target with current stimulus.

PMI data will be the main focuses for today as Eurozone and UK PMIs will be featured in European session. US will also release PMIs. Canada’s retail sales will also be featured.

EUR/USD lost upside momentum again after hitting 1.1097. Intraday bias is turned neutral first. On the downside, break of 1.1053 minor support will suggests that rebound from 1.0989 has completed. Intraday bias will be turned back to the downside for 1.0989 support. Break will resume the decline from 1.1175 for retesting 1.0879 low. On the upside, above 1.1097 will extend the rebound to retest 1.1175 resistance. 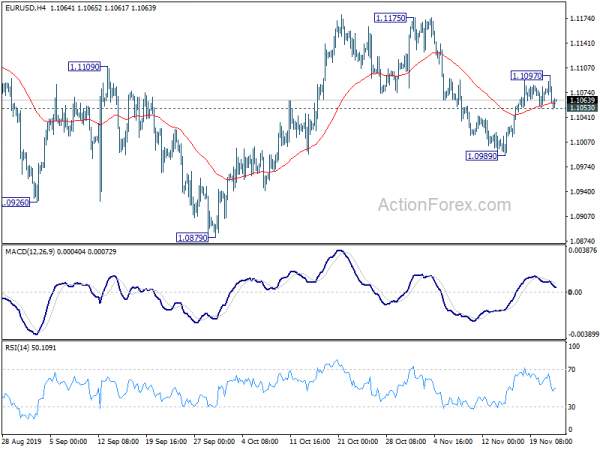 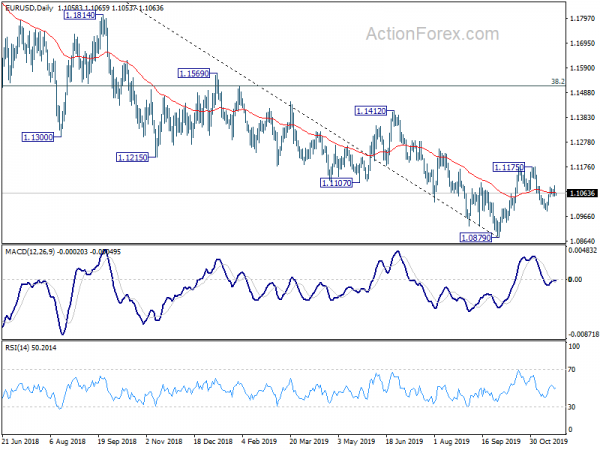