Dollar trades generally lower as markets started another holiday shortened week quietly. With an empty calendar in Asia, focuses were mainly on geo-political news, which weren’t very much market moving. For now, commodity currencies are the next weakest following the greenback. Yen and Swiss Franc are the mildly stronger ones.

Technically, EUR/USD’s breach of 1.1199 resistance suggests resumption of rise from 1.0879. Next target is 1.1281 projection level. However, EUR/JPY struggles to break through equivalent resistance at 122.65. It remains to be seen if Euro could stage a broad based rally. The key might lie on EUR/GBP, which is staying in tight range above 0.8476 minor support. With that, there is no cross confirmation of rebound in Sterling yet, despite rebound in GBP/USD and GBP/JPY. It would be very interactive on how things play out in these pairs.

US warned more more sanction against Iran after air strikes

On Sunday, US military carried out air strikes in Iraq and Syria, against the Kataib Hezbollah militia group which is Iran-backed. That was in response to killing of a US civilian contractor in a rocket attack on an Iraqi military base.

US Secretary of State Mike Pompeo told reports that “we will not stand for the Islamic Republic of Iran to take actions that put American men and women in jeopardy.”Defense Secretary Mark Esper said the strikes were “successful” warned of “additional actions as necessary to ensure that we act in our own self-defense and we deter further bad behavior from militia groups or from Iran.”

North Korea’s state media KCNA reported that, on Sunday, leader Kim Jong Un emphasized the need to take “positive and offensive measures for fully ensuring the sovereignty and security of the country”. Kim said that at the largest plenary session of the Workers’ Party since 2013.

Separately, ABC reported that North Korea promised to deliver a “Christmas gift” to the US. Some saw that as echoing the “positive and offensive measures” and could point to some long-range missile tests, or even more nuclear weapons tests.

On the issues, White House national security adviser Robert O’Brien said: “We’ll reserve judgment, but the United States will take action as we do in these situations. If Kim Jong Un takes that approach, we’ll be extraordinarily disappointed and we’ll demonstrate that disappointment.”

Chinese ambassador urges US to honor commitment on one-China policy

In an interview with Chinese state television CGTN on Saturday, China’s ambassador to US Cui Tiankai urged US to “honor their commitment” on one-China policy. Meanwhile, he also claimed that “we always honor our commitment” regarding trade.

He added that “the bottom line is the one-China principle. There is only one China in the world. Both Taiwan and the Chinese mainland are part of China. China’s sovereignty and territorial integrity should not be violated.”

On trade, Cui said, “as far as we are concerned, we always honour our commitment. We will always implement what we promised. There is no problem about that”. And, “I’m confident that since we have spent so much time with such great efforts at reaching this agreement, I think it would certainly serve the interests of both sides if this agreement is implemented.”

The upcoming week continues to be relatively light with New Year holiday. FOMC minutes will be watched even though it’s scheduled to be released just before weekly close. Fed fund futures are currently pricing in over 77% chance of Fed keep rates at 1.50-1.75% after June meeting. We’ll see if the minutes affirm such expectations. Also, US will consumer confidence and ISM manufacturing will catch some attentions. 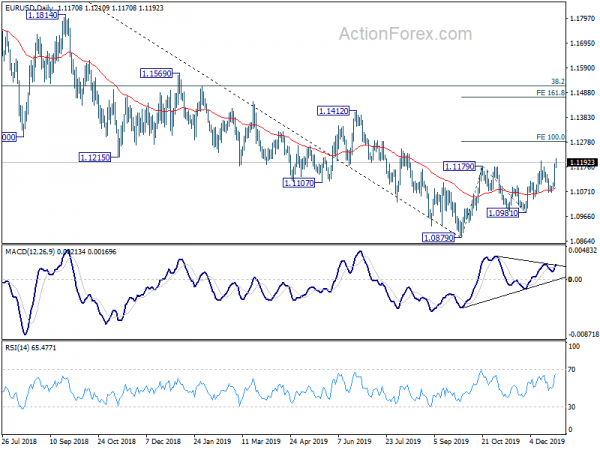 EUR/USD: Continuation Of The Rebound