Dollar rises broadly in rather quiet markets today. Consumer inflation data from the US is supporting the greenback’s firmness, but provides not further lift. Indeed, Swiss Franc is even stronger, as the best performing one today so far. China Yuan is also notably stronger than Dollar, after US scrapped the China’s currency manipulator label. On the other hand, New Zealand Dollar is the weakest one, followed by Euro. The common currency is dragged by the selloff in EUR/CHF. Focus will now turn to tomorrow’s US-China trade deal phase one signing.

Technically, EUR/CHF broke 1.0782 temporary low to resume medium term down trend. Next target is 1.0648 projection level. Selloff in EUR/CHF drags down both EUR/GBP and EUR/JPY, as the latters failed to sustain above recent resistance level. It looks like EUR could engage in more consolidative trading against Sterling and Yen first. AUD/USD’s recovery is starting to lose momentum ahead of 0.6930 minor resistance. We might see a retest on 0.6849 temporary low later in the session, should Dollar gathers some steam.

Swiss tells US it’s not engaging in currency manipulation

In response, Swiss Finance Ministry said in a statement, “it should be stressed that Switzerland does not in any way engage in manipulation of its currency to prevent adjustments to the balance of payments or gain unjustified competitive advantage.”

Meanwhile, China was dropped as currency manipulator as with the trade deal phase one , China had made “enforceable commitments to refrain from competitive devaluation”.

The Information Technology & Innovation Foundation called on the US, EU and Japan to “band together in strong trilateral partnership to pressure China into rolling back the mercantilist trade practices it uses to grow advanced, innovation-driven industries”.

In a report released on Monday, the think tank warned “without aggressive, coordinated action, leading economies in Europe, Asia, and North America are likely to face a crushing wave of unfair competition”. Jobs are also threatened in industries as diverse as aerospace, automobiles, biopharmaceuticals, chemicals, electronics, digital media, Internet services, machine tools, semiconductors, and others.

“China has progressed enough economically and technologically that it no longer fears bilateral pressure against its mercantilist trade violations, but it sees collective action as a real deterrent,” said ITIF’s associate director for trade policy, Nigel Cory, who co-authored the report with ITIF President Robert D. Atkinson. “Neither the United States nor the European Union nor Japan can make China change its ways alone, but together, through a stronger trilateral agenda, they can.”

China’s foreign trade surprised to the upside in December. Exports rose 7.6% yoy and imports jumped 13.6% yoy. Both outbound and inbound shipment improved from a month ago. Exports in November contracted -1.9% yoy, while imports edged 0.3% higher. Trade surplus widened to USD 46.8B, from USD 37.9B a month ago.

Strength in Chinese trade in last December was mainly driven by low base and frontloading due to early lunar New Year this year. We expect China’s trade would stabilize this year, growing with single digit given smooth US-China trade negotiations.

More in Low Base and Frontloading Drove China’s Trade Higher in December.

ECB Executive Board Member Yves Mersch said that the economy is “certainly giving good signs of stabilization”, and “the same goes a little bit for inflation.” Current development could prompt reassessment on whether growth risks are still skewed to the downside.

However, he noted, “it will be premature to give you an answer, but we are certainly moving in the right direction, and for us central bankers, it means that we were proven right to have very accommodative monetary.”

In the bigger picture, down trend from 1.2004 is (2018 high) is still in progress. More importantly, it’s likely a long term down trend itself, rather than a correction. Further fall should be seen to 1.0629 support and possibly below. On the upside, break of 1.1059 resistance is needed to be the first sign of medium term bottoming. Otherwise, outlook will remain bearish in case of rebound. 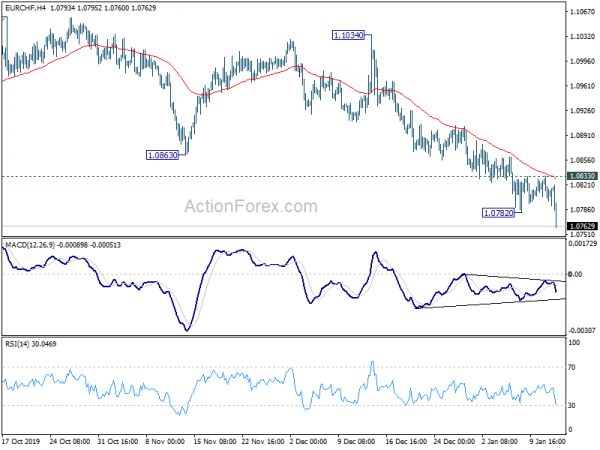 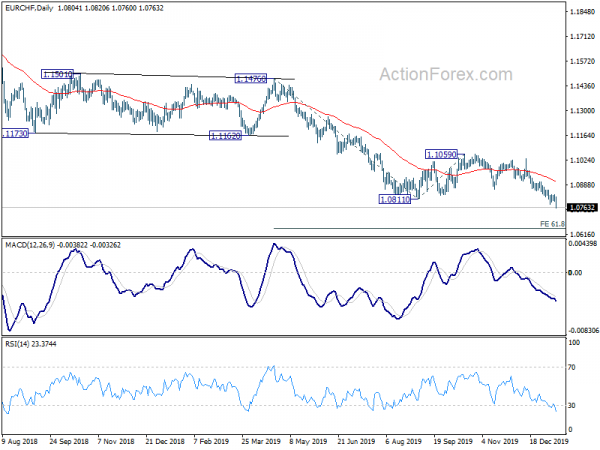