European majors recover today following better than expected PMI data from UK and Eurozone. Concerns of China’s coronavirus hasn’t materialized into business confidence data yet. On the other hand, commodity currencies are generally lower, followed by Dollar. For the week, while New Zealand and Australian Dollars are among the weakest, Yen remains the worst performing. Swiss Franc is currently the strongest for the week, followed by Dollar.

Technically, GBP/USD’s break of 1.2929 minor resistance suggests temporary bottoming at 1.2849 and intraday bias is turned neutral. But another fall remains mildly in favor as long as 1.3069 resistance holds. GBP/JPY’s break of 144.60 resistance is relatively more bullish and should pave the way to retest 147.95 high.

Canada retail sales were virtually unchanged at CAD 52.6B in December, matched expectations. Ex-auto sales rose 0.5% mom, above expectation of 0.4% mom. Sales were up in eight provinces. Ontario rose 0.4% as a result of higher sales at motor vehicle and parts dealers. In Toronto, sales were up 1.8%. In Alberta, sales grew 1.0%. In Quebec, sales dropped -1.4%, largest monthly decline in more than a year.

Tim Moore, Associate Director at IHS Markit, said: “The recent return to growth signalled by the manufacturing and services PMIs provides a clear indication that the UK economy is no longer flat on its back, with our GDP nowcast pointing to 0.2% growth through the first quarter of the year.”

But the “findings highlight a number of concerns from an international perspective following the COVID-19 outbreak.” Service providers noted “reduced tourism-related bookings and cancellations from overseas clients”. Manufacturers noted “abrupt shortages of components from China had reverberated through their supply chains “.

Chris Williamson, Chief Business Economist at IHS Markit said: “The eurozone economy managed to pick up some momentum again in February despite many companies having been disrupted in various ways by the coronavirus, which caused supply problems and showed signs of hitting travel and tourism numbers in particular. The flash PMI has climbed to a six-month high, consistent with GDP growing at a quarterly rate approaching 0.2%.

“However, the outlook remains highly uncertain, notably in respect to the potential for further disruptions to supply chains, travel, tourism and demand arising from the coronavirus outbreak. In particular, the widespread delivery delays seen in February bode ill for production in March unless new deliveries can be secured. While the February survey data are welcome news in a month in which media headlines have been dominated by fears of economic growth being hit by the COVID-19 outbreak, the full immediate impact may not yet be apparent.”

Kuroda added that uncertainty regarding China’s coronavirus outbreak is high, because of the impact on exports, production, and tourism. He’d watching the effects with “grave concern.” Also, the coronavirus will be the “biggest topic on the agenda” at this week’s G20 meeting.

Joe Hayes, Economist at IHS Markit, said: “latest PMI data dash any hopes of a first quarter recovery in Japan and significantly raise the prospect of a technical recession”. February’s data “stack the odds heavily against Q1 growth, despite Abe’s best efforts to stimulate the economy after the sales tax hike”.

Australia CBA PMI Manufacturing rose 0.2 to 49.8 in February, up from 49.6. However, PMI Services dropped to 48.4, down from 50.6. PMI Composite also turned into contraction at 48.3, down from 50.2. The rate of output reduction was the “steepest seen since data collection began in May 2016”. Panel membered linked this to “a combination of subdued client demand, adverse weather and the Covid-19 outbreak”.

CBA Senior Economist, Gareth Aird said: “The February flash PMIs imply a contraction in private demand. Whilst this is clearly a disappointing result, it is not altogether surprising given the two exogenous shocks that have hit the Australian economy – the bushfires and the coronavirus (Covid-19).”

“Our main concern is that these event have hit the global and local economies at a time when domestic demand was already soft. The level of both the services and manufacturing PMIs highlights the need for more policy stimulus. With monetary policy doing most of the heavy lifting an easing in fiscal policy continues to look the most appropriate response to support aggregate demand.” 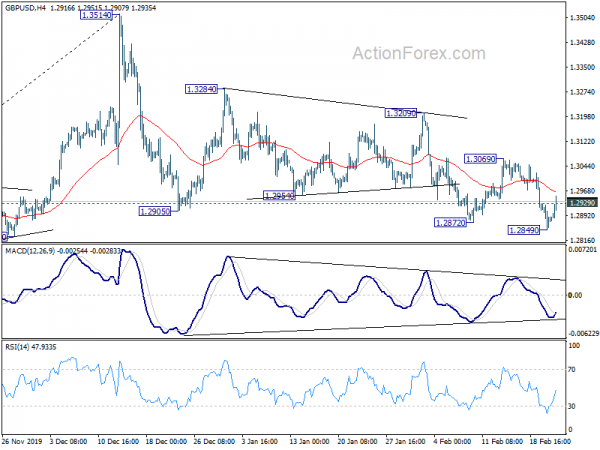 In the bigger picture, rise from 1.1958 medium term bottom is not completed yet despite current pull back form 1.3514. Such rally is expected to resume later to 1.4376 key resistance. Reactions from there would decide whether it’s in consolidation from 1.1946 (2016 low). Or, firm break of 1.4376 will indicate long term bullish reversal. In any case, for now, outlook will stay bullish as long as 1.2582 resistance turned support holds. 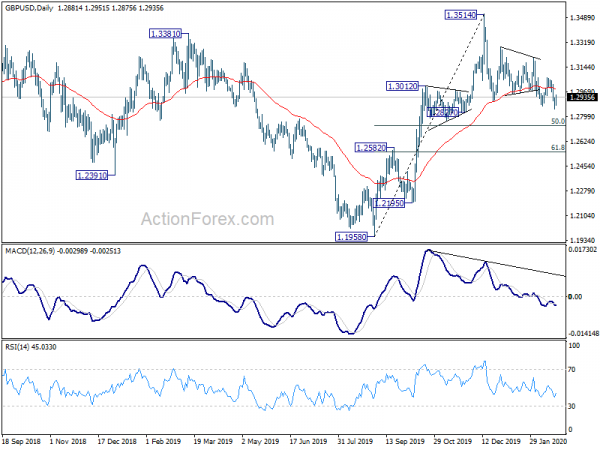