In the currency markets, Canadian Dollar is currently the weakest for the weak, as pressured by fall in oil price too. Yen is the strongest one on risk aversion and falling yields. Dollar is mixed as recent rally turned into correction. Traders are quickly increasing their bets that global coronavirus outbreak would eventually force Fed to cut interest rate again this year. Fed fund futures are now pricing in more than 80% chance of a cut by July meeting. It was 50-50 chance just a month ago.

Total number of confirmed Wuhan coronavirus cases surged pass 80k to 80096 globally. In China, the National Health Commission said 508 new cases were confirmed on February 24, brining he total accumulated number to 77658. Death tolls increased by 71 to 2663. Globally, situation in Italy is worrying with confirmed cases standing at 229, with 7 deaths. Number for South Korea stay high at 893 case as and 8 deaths. 47 cases were found in Iran with 12 deaths.

In the US, there are 35 cases for now, with no death. The White House said yesterday that “the Administration is transmitting to Congress a $2.5 billion supplemental funding plan to accelerate vaccine development, support preparedness and response activities and to procure much needed equipment and supplies.”

Fed Mester: Patient approach appropriate unless there is a material change to outlook

Cleveland Fed President Loretta Mester said a in a speech that “the economy has been performing well and I expect that to continue”. Fed should continue with a “patient” approach regarding interest rate adjustments. Also, she didn’t favor further policy accommodation to lift inflation back to target.

Mester said, “my current view is that monetary policy is well calibrated to support our dual mandate goals, and a patient approach to policy changes is appropriate unless there is a material change to the outlook. She added that Fed has been undershooting inflation goal for some time, “so a natural question is whether policymakers should add even further accommodation to spur a faster return of inflation to our goal.” But, “I would not favor that at this time,” she said. “In my view, doing so would raise the risk of generating imbalances that would threaten the expansion and undermine our employment goal.”

“Recent emergence of the coronavirus in Wuhan, China” is among the risks to the US economy. “This might mean a larger negative impact on growth in China in the near term but perhaps a less protracted one,” she said. “At this point, it is difficult to assess the magnitude of the economic effects, but this new source of uncertainty is something I will be carefully monitoring.”

BoE Haldane: A big chunk, if not all of uncertainty dissipated since last year

BoE Chief Economist Andy Haldane said a “big chunk, if not all” of uncertainty regarding domestic politics and Brexit had dissipated since the end of 2019. “Some early stage signs in surveys suggest there could be a stirring in the undergrowth when it comes to company investment plans”. Nevertheless, it’s “too early to declare victory,”

Haldane added that the global economy has grown stronger since the financial crisis more than a decade ago. BoE’s balance sheets are in better shape are in better shape too. He doesn’t see the buildup of new asset bubbles. Nor does he see a “wholesale retrenchment” of globalization even with US China trade war.

Japan corporate service price index rose 2.3% yoy in January, above expectation of 2.1. Germany Q4 GDP final will be featured in European session, together with UK CBI realized sales. Later in the day, US will release house price indices and consumer confidence.

USD/JPY drops sharply to as low as 110.33 but recovered ahead of 110.28 resistance turned support. Intraday bias remains neutral and another rise is still mildly in favor. Firm break of 112.40 resistance will affirm medium term bullishness and target 114.54 key resistance next. However, sustained break of 110.28 would raise the chance that whole rise from 104.45 has completed. Deeper fall would be seen back to 108.30 support first. 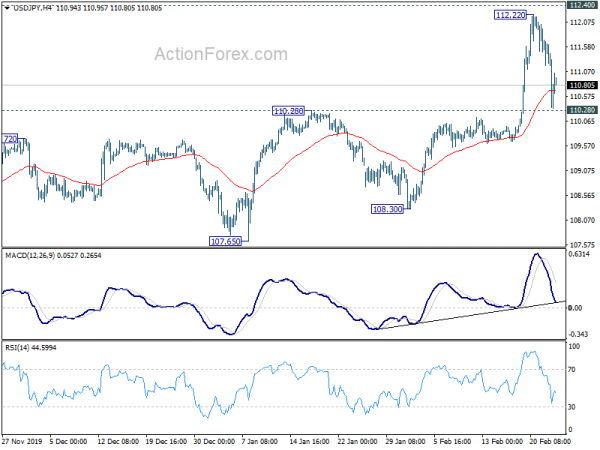 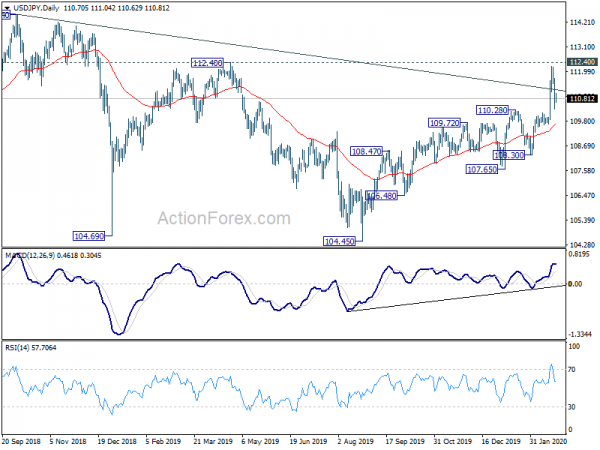