Action Forex
HomeAction InsightMarket OverviewMonetary Policy is No Cure to Coronavirus Crash as Selloff in Europe...

Fed’s all-in easing, together with RBNZ and BoJ stimulus, provide no apparent support to market sentiment. Number of coronavirus cases continued to skyrocket, breaking 170,000 level today. More importantly, deaths totals hit 6,680. Selloff intensifies in European session with FTSE, DAX and CAC breaking through Friday’s spike low. US futures also point to another deep down open. But it remains to be seen if DOW and S&P 500 would break through last week’s lows. In other markets, crude oil is back below 30 but stays above recent low at 27.50. But gold’s decline is accelerating below 1500 handle.

In the currency markets, commodity currencies remain the weakest ones, as led by Australian Dollar now. Yen and Swiss Franc are the strongest, followed by Euro and Dollar. USD/CHF’s breach of 0.9411 minor support suggests that recovery form 0.9818 has completed. Deeper fall is in favor to retest 0.9181 support. Correspondingly, we might see a break of 1.1250 resistance in EUR/USD to turn bias back to the upside for 1.1496 resistance.

IMF Managing Director Kristalina Georgieva said in a blog post that the fund is ready to mobilize its USD 1T lending capacity to help member countries on coronavirus impacts. And, “as a first line of defense, the Fund can deploy its flexible and rapid-disbursing emergency response toolkit to help countries with urgent balance-of-payment needs.”

Meanwhile she also urged that “the case for a coordinated and synchronized global fiscal stimulus is becoming stronger by the hour.” There are three areas of actions for the global economy, including fiscal policies, monetary policies and regulatory responses. “All this work—from monetary to fiscal to regulatory—is most effective when done cooperatively.”

US Empire state manufacturing dropped to -2.15, worst since 2009

Fed delivered another emergency rate cut late Sunday, by -1.00% to 0-0.25%. Federal funds rate are now back at the record low it hit during the 2008 global financial crisis. Additionally, Fed will restart asset purchases to boost its holdings by at least USD 700B, with USD 500B of treasury securities and USD 200B of agency mortgage-backed securities. Loretta Mester dissented, preferring a smaller rate cut instead.

Additionally, there are other measures announced too. Banks are allowed to borrow from the discount window for a long as 90%. Reserve requirement ratios were also lowered to 0%. Fed will also coordinate with other major central banks to ensure Dollar availability through liquidity swap line arrangements.

In the statement, Fed said that the coronavirus outbreak has “harmed communities and disrupted economic activity in many countries” including the US. The effects will “weigh on economic activity in the near term and pose risks to the economic outlook.” Fed will keep interest rate at the current range ‘until it is confident that the economy has weathered recent events and is on track to achieve its maximum employment and price stability goals.”

EU Breton: Obviously we are expecting a recession this year

EU’s internal market Commissioner Thierry Breton told BFM Business radio that due to the coronavirus pandemic “obviously we are expecting a recession during the year 2020.” “We are at war with the virus. An economic war.”

He noted before before the crisis, EU were expectation around 1.4% growth for the whole continent. But, “now we expect a negative impact of between 2% and 2.5%”.

After an emergency meeting today, BoJ announced further monetary easing to counter the economic impact of coronavirus pandemic. In particular, annual pace of ETF purchase is doubled from JPY 6T to JPY 12T. J-REIT purchases are also doubled to JPY 180B per year.

The Special Funds-Supplying Operations to Facilitate Corporate Financing is introduced to provide loans against corporate debt at 0% interest rate with maturity up to 1 year. The operation will be conduced until end of September this year.

The policies under the yield curve control is held unchanged. Short-term policy interest rate target is kept unchanged at -0.10%. BoJ will continue to purchase JGBs to keep 10-year yield at around zero percent. Annual pace of monetary base expansion is kept at around JPY 80T.

The central bank also pledged to “take additional monetary easing steps as needed without hesitation with a close eye on the impact from the coronavirus epidemic for the time being”.

BoJ Kuroda: Impact of coronavirus could continue for the time being

At the post meeting press conference, BoJ Governor Haruhiko Kuroda said the coronavirus has already has an impact of Japan’s economy through “decline in inbound tourism, as well as on exports, output and consumption”. Also, “event cancellations and people staying home have led to a sharp slump in consumption.”. Hence, BoJ revised down economic assessment.

Additionally, “given the fact the epidemic is spreading with a lag among various countries, the impact of the virus could continue for the time being.” Nevertheless, he’s optimistic that “once the impact is mitigated demand could pick up”. Japan’s economy would resume a “moderate expansion trend” then.

He also emphasized that it was “necessary to take necessary action quickly, particularly ahead of the March fiscal year-end, to ensure corporate financing remains smooth and markets restore stability.”

In an unscheduled announcement, RBNZ lowered Official case rate by -0.75% to 0.25%, and pledges to keep it there for at least the next 12 months. Additionally, should further stimulus be required, a “Large Scale Asset Purchase Programme” of government bonds would be preferable to another OCR cut.

In the statement, it said that “negative economic implications of the COVID-19 virus continue to rise warranting further monetary stimulus.” The impact to the New Zealand economy “is, and will continue to be, significant”. Demand will be “constrained”, as will domestic production. Spending and investment will be “subdued for an extended period”.

USD/CHF’s breach of 0.9411 minor support suggests that corrective rebound form 0.9181 has completed at 0.9568 already. Intraday bias is turned back to the downside for retesting 0.9181/6 key support zone. On the upside, however, sustained break of 0.9613 support turned resistance will indicate bullish reversal and target 0.9484 resistance and above. 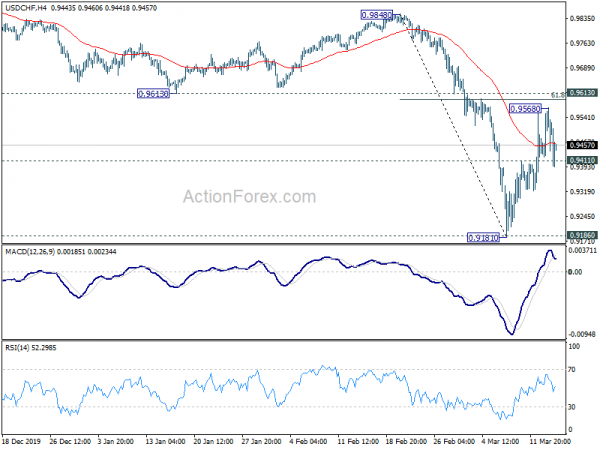 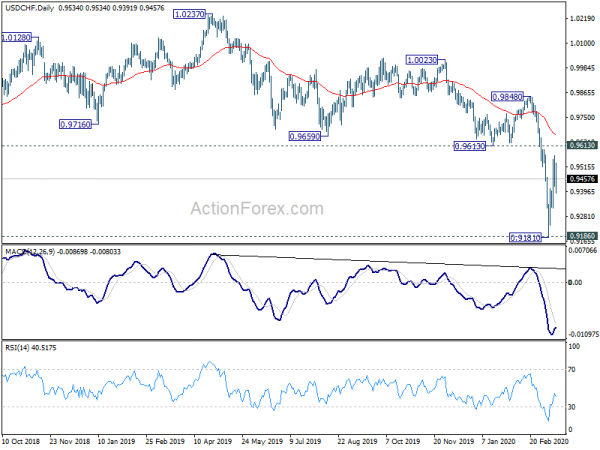