Markets are back in risk averse mode as another week starts, after Spain and Italy suffered the worst days of coronavirus pandemic over the weekend. US Senate failed to advance another aid package on differences between Republican and Democrats. But resolution would be seen soon based on the severity of the outbreak in the US, which surged pass Spain already. RBNZ announced QE at NZD 30B size while the country enter into lockdown, together with Australia. The better news is that South Korea’s new cases hit the lowest level since the peak in February. Based on the experience in South Korea and Taiwan, the pandemic is realistically containable.

In the currency markets, Yen and European majors are currently the stronger ones, while commodity currencies and Dollar are the weaker. But major pairs and crosses are generally bounded inside Friday’s range. Technically, Dollar is losing upside momentum further, as seen against Euro, Swiss and Yen. These pairs should follow other Dollar pairs to turn into consolidations. WTI crude oil could be the one to watch, with today’s decline. Focus is back on 20.40 low set last week and break will extend recent down trend towards 10.65/17.12 long term support zone.

Fed Bullard: Unemployment rate might jump to 30% in Q2 due to coronavirus shutdown

St Louis Fed President James Bullard warned that US unemployment could surge to 30% in Q2 because of coronavirus shutdown. The number, if realized, would be three times more than the peak in 2007-2009 recession. GDP could contract an unprecedented -50%, with a hit of around USD 2.5T.

But he also noted that this is a “planned, organized partial shutdown” of the economy in Q2. He added, “We are not trying to move production and income up in the second quarter. We are trying to keep it out of the second quarter.” And, “You want capital to just sit in place. Switch off the factory … Then switch it back on.”

Bullard expected activity to rebound quickly ahead. “I would see the third quarter as a transitional quarter,” with the following six months “quite robust” as Americans ramp up consumerism. “Those quarters might be boom quarters,” he said.

ECB Schnabel: None of our tools used to its full extent

ECB Executive Board member  Isabel Schnabel told German newspaper  Frankfurter Allgemeine Sonntagszeitung that the central still have all of its tools available to mitigate the crisis. She said, “the ECB is in the comfortable position of having a large set of tools, none of which has been used to its full extent”

“We have the key interest rates, we have instruments for providing liquidity to the banks, and we have the asset purchase programs,” Schnabel added. “The claim that central banks have run out of tools simply doesn’t match up to the facts.”

Though, she also noted that monetary policy alone was insufficient. “There are proposals to use the European Stability Mechanism or the European Investment Bank. The issuance of one-off ‘corona bonds’ would also be conceivable. It is up to politicians to decide,” Schnabel said.

Separately, Vice President Luis de Guindos told Spanish TV La Sexta on Sunday that the impact of coronavirus pandemic ” will be very hard and will place Europe into a recession.” The poor Q1 will “drag the overall European economy into negative growth rates in the year”. Though, he’s optimistic that “we will see positive growth rates for Europe” in Q2. He also urge EU to issue pan-Europe bonds to help counter the economic impacts.

RBNZ announced today to launch a NZD 30B Large Scale Asset Purchase (LASP) program of government bonds. The purchases will be “across a range of maturities” in the secondary market over the next 12 months. It aims to “provide further support to the economy, build confidence, and keep interest rates on government bonds low.” RBNZ will monitor the effectiveness and “make adjustments and additions” if needed.

Over the weekend, Governor Adrian Orr said in an article that
“the evolving coronavirus outbreak has unsettled communities around the world, creating uncertainty about the future.” “New Zealand is no exception” but “we start in the best possible relative position”. The central bank already cut the Official Cash Rate form 1.00% to 0.25% and remains “committed to keep it there for at least the next year”. He added, “we are ready to act further, with more firepower in reserve to keep the financial taps turned on.”

Separately, Prime Minister Jacinda Ardern announced today that the country is “now preparing to go into self isolation”. All non-essential services, schools and offices will be shut over the next 48 hours. Supermarkets and pharmacies will remain open.

Australian government is starting lockdown measures as coronavirus spread accelerates in the country. A total of 1642 confirmed cases are reported in the country now, with 669 in New South Wales, 355 in Victoria and 319 in Queensland, 140 in Western Australia, and 100 in Southern Australia. Death tolls remain low at 7.

Non-essential services, including indoor sporting venues, pubs, cinemas, bars and places of worship will be closed from midday Monday. Prime Minister Scott Morrison warned this is the “toughest year of our lives” and the lock down could last six months. Several Australian states have take even stronger measures. Western Australia and South Australia announcing tighter border restrictions at the weekend. Victoria closes all schools starts from Tuesday.

Separately, the Australian Prudential Regulation Authority (APRA), banking watchdog, said banks must account for possible loss form loan repayment holidays they offered to those affected by the coronavirus outbreak. And, banks must publicly disclose the volume of such loans. Last week, banks announced coronavirus support packages that provide borrowers with an option to defer repayment for up to six months. These packages target mainly small businesses and home loan customers affected by the coronavirus outbreak.

A piece of good news regarding the coronavirus pandemic is that South Korea on Monday reported its lowest number of new cases since the peak on February 29. The KCDC said there were only 64 new confirmed cases, taking the tally to 8961. Death toll rose by 1 to 110. The number of deaths stay at a relatively low level comparing to countries like Italy and Iran. It’s also the 12th straight days of new cases at around 100 or less, much better than the peak of 909. Also, 257 patients were released from hospital.

Separately, Vice Finance Minister Kim Yong-beom said a new task force with be set up within the ministry. Special meetings will be held everyday to assess the situation and decide if more policy actions are needed to stabilize the financial markets. The government pledged to make all efforts to prevent extreme market volatility to turn into credit crunch. 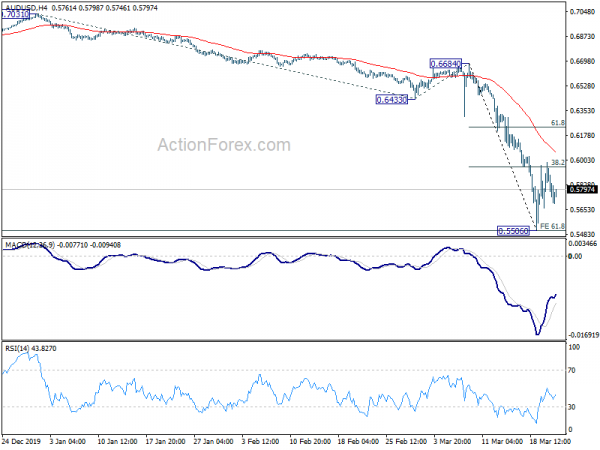 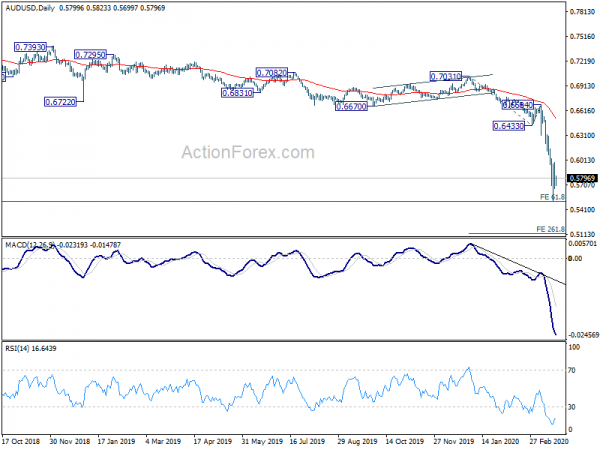