Asian markets turn softer today as boost from US stimulus package fades very quickly. Focus will instead turn to BoE rate decision and US jobless claims. In particular, the latter would reveal how serious the initial impact of coronavirus outbreak in the US is. In the currency markets, commodity currencies turn generally softer today as led by Australian Dollar. Yen and Swiss Franc reclaim some grounds.

Technically, we’d maintain the view that markets are staying in consolidations for the moment, including stocks. Dollar and Yen are both set to resume recent rally sooner or later, as the correction completes. The main question in which one would be stronger. 112.22 key resistance in USD/JPY is the level to determine the relative strength.

US jobless claims to show huge spike on coronavirus impacts

Initial jobless claims from the US have never been so closely watched before. A massive spike in numbers and record jump are expected, as American are suffering heavy impact from coronavirus pandemic. Estimates currently range from 1 million to 4 millions news claims for the weekending March 21. These forecasts are more academic than anything because there is just no way to gauge the impact so far.

Additionally, today’s number might not be very representative. On the one hand, it could just be the tip of the iceberg with claims capped by how quickly they’re processed. A huge number isn’t more disastrous neither as the claims could be somewhat “front-loaded”. We won’t probably know the real picture after getting at least 4 to 6 weeks of data.

US Senate passed coronavirus relief package, House to have voice vote on Friday

US Senate finally approved the USD 2T coronavirus relief package after marathon sessions. The historic legislation was passed by 96-vote just before midnight Wednesday. The package includes USD 500B in loans and assistance for large corporations, USD 300B for small businesses. Individuals will get USD 1200 for each adult and USD 500 for each child. Additionally, unemployment insurance will be expanded. There is also additional funding for hospitals.

Now, the House is set scheduled to vote on the package on Friday. House Majority Leader Steny Hoyer said the House will attempt to pass the bill through a voice vote, a process that would not require all members to be present. “In order to protect the safety of members and staff and prevent further spread of COVID-19 through Members’ travel, the Republican Leader and I expect that the House vote on final passage will be done by voice vote,” Hoyer wrote.

BoE to decide whether to expand QE again today

BoE’s scheduled monetary policy session is a main focus today. The central has already delivered emergency action last week, by cutting interest rate to 0.1% and expanded its asset purchase program by GBP 200B to GBP 645B. No further rate cut is expected for the time being.

Instead, new Governor Andrew Bailey, who has been in the job for less than two weeks, is expected to reaffirm the central bank’s commitment in fighting the impact of coronavirus pandemic. There might be a further increase in the quantitative easing program, after Fed went QE infinity earlier. Or the board could save this bullet for later use in May. There is no consensus in markets on which way BoE would take.

Intraday bias in USD/JPY stays neutral at this point. More consolidative trading could be seen first. Near term outlook will remain cautiously bullish as long as 106.75 support holds. Decisive break of 112.22 key resistance will carry larger bullish implication and target 114.54 resistance next. On the downside, break of 106.75 support will turn bias back to the downside for retesting 101.18 low instead. 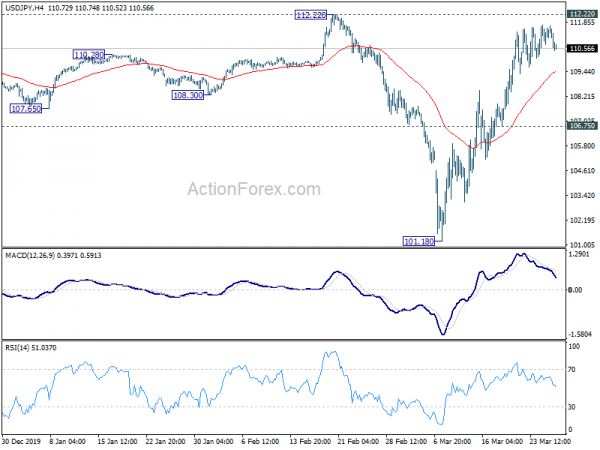 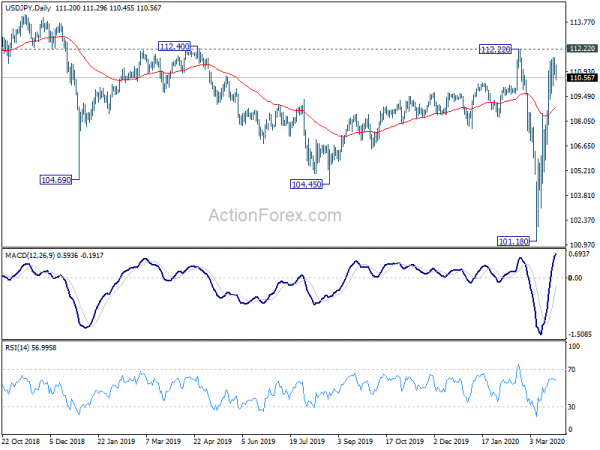