Markets continue to staying in tight range today as consolidations continue. There is still no end in sight regarding the coronavirus pandemic, with confirmed cases breaking 800k handle, and deaths above 39k. Movements in the major stock indexes are mild based on recent standard. WTI crude oil is back above 22 handle after earlier dip this week. In the currency markets, Dollar is currently the strongest one, followed by Sterling and then Yen. New Zealand Dollar is the weakest followed by Australian.

Technically, Dollar is starting to display signs that recent pull back has completed. EUR/USD breaches 1.0953 minor support while USD/CHF breaches 0.9655 resistance. Next focus will be 1.4275 minor resistance in USD/CAD while AUD/USD is still far away from 0.5870 minor support. These levels will continue to be watched, together with 1558 support in gold.

Canada GDP grew 0.1% in Jan, coronavirus to have significant effect in Mar onward

Canada GDP grew 0.1% mom in January, below expectation of 0.2% mom. Growth was recorded in agriculture and forestry, construction, manufacturing, wholesale, finance and insurance, and public sector. Other sectors contracted including mining and oil and gas extraction, utilities, retail, and transportation and warehousing.

Statistics Canada said also noted: “The pandemic will significantly affect economic activity in March and subsequent months. Since the beginning of March, flight suspensions and travel advisories have been announced and various public events have been cancelled or postponed. Crude oil prices have declined amid lower demand due to a slowdown in global economic activity and travel. Additionally, tensions between oil-producing nations are expected to lead to an increase in supply.

Because of these factors, as well as supply chain disruptions for many types of goods, temporary closures of non-essential stores and service providers and the recent lowering of interest rates, the economic effects of the coronavirus outbreak will be deeply felt in subsequent months.”

Current account deficit narrowed to GBP -5.6B in Q4 versus expectation of CAD -7.0B. Gfk consumer confidence dropped to -9 in March.

ANZ said: “Times are grim. We’ve never seen such a broad economic shock strike with such ferocity. Firms are right to be alarmed. Both fiscal and policy are leaping into action but a severe recession is guaranteed… It’s going to get worse before it gets better, and firms know that. Rock-bottom confidence is the symptom, not the cause, of the woes in the New Zealand (and global) economy.”

China PMIs back in expansion, but observations needed to confirm return to normal

The report said the region is witnessing an “unusual combination of disruptive and mutually reinforcing events.” “Significant economic pain seems unavoidable in all countries.” “Containment of the pandemic would allow for a sustained recovery in the region, although risks to the outlook from financial market stress would remain high.”

EUR/USD’s break of 1.0953 minor support suggests that corrective recovery from 1.0635 has completed. Intraday bias is turned back to the downside for retesting this low first. On the upside, however, decisive break of 61.8% retracement of 1.1496 to 1.0635 at 1.1167 will raise the chance of larger trend reversal and turn focus to 1.1496 key resistance. 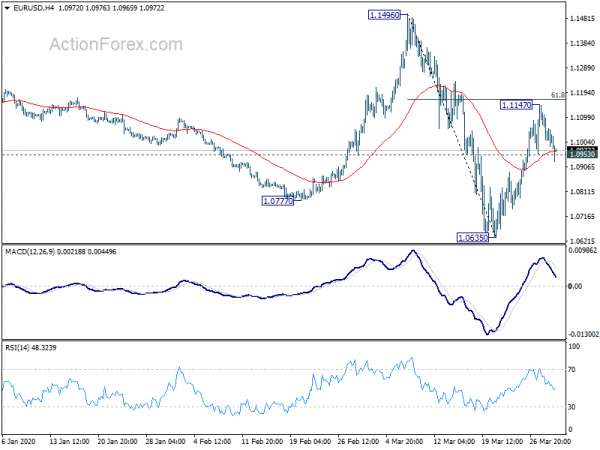 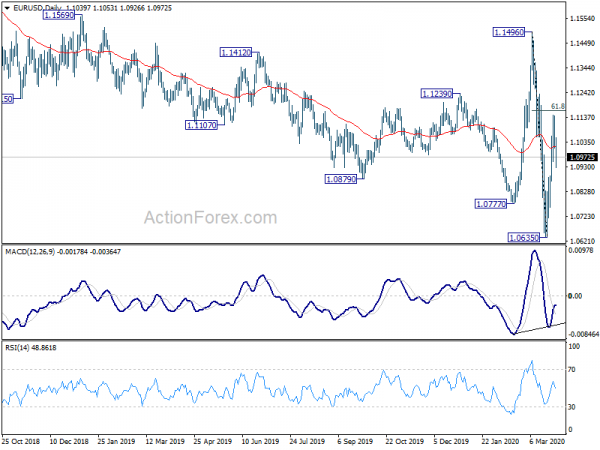