Australian dollar jumps broadly today after RBA kept monetary policies unchanged as widely expected. Aussie is additionally helped by the strong rally in US stocks overnight, even though the rise in Asia markets is relatively muted. Also, China, the origin of the coronavirus pandemic, is set to end the lockdown of Wuhan. New Zealand Dollar follows Aussie closely as the second weakest. Dollar is currently the worst performing one as safe haven flows reverse. Swiss Franc and Euro are the next weakest.

Technically, Dollar’s rebound could have ended and it’s probably starting the third leg of near term correction. 1.0902 minor resistance in EUR/USD and 0.9686 minor support in USD/CHF will be watched for signs of Dollar weakness. For this down leg in the greenback, AUD/USD will likely rise through 0.6213 temporary top while USD/CAD will likely drops through 1.3920 temporary low.

RBA left cash rate unchanged at 0.25% as widely expected. It also reaffirmed the 0.25% target for 3-year government bond yield with asset purchases. The central bank also said that it “will not increase the cash rate target until progress is being made towards full employment and it is confident that inflation will be sustainably within the 2–3 per cent target band.”

RBA also said noted there is “considerable uncertainty” about the near-term outlook of the economy. Much depends on the successful of coronavirus containment and the length of social distancing. Nevertheless, “a very large economic contraction” is expected in Q2 and unemployment is expected to rise to its “highest level for many years”.

Australia AiG Performance of Services Index dropped from 43.0 to 38.7 in March. That’s the lowest level since March 2009 and the fourth month of contracting results. AiG said, “the services sector is now entering a difficult period of pandemic-related closures and adjustments from a base already weakened by summer’s bushfire crisis and by longer-term factors”.

Also from Australia, trade surplus narrowed to AUD 4.36B in February, above expectation of AUD 37.5B.

The mean perceived probability of losing one’s job in the next 12 months increased 4.7 percentage points to 18.5%. The reading is a new series’ high and 4.3 percentage points above the 12-month trailing average. 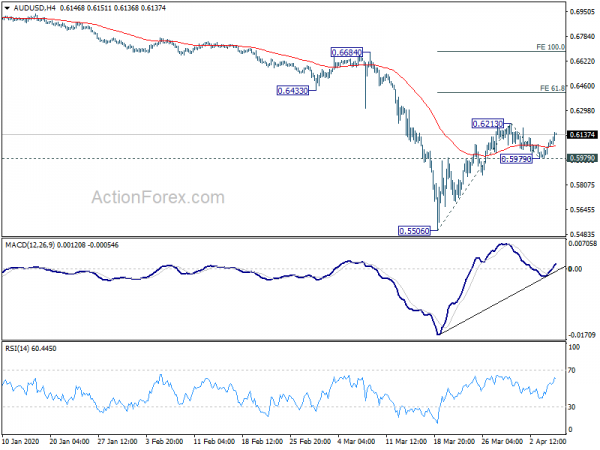 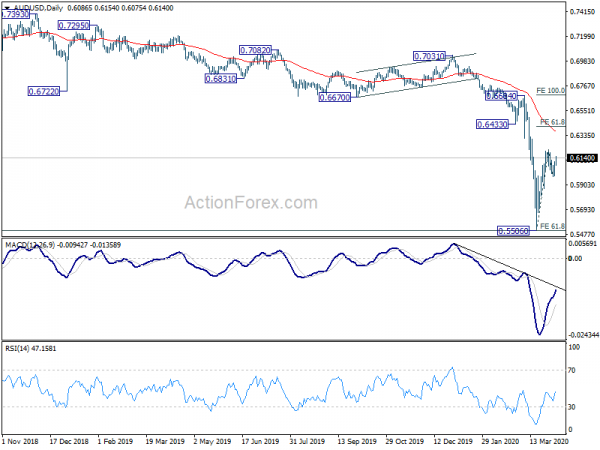