Dollar Rebounds Further on Oil Weakness and Poor US Data

Dollar is striking back today as market turns into risk averse mode, in particular after poor US economic data. Mild weakness in oil price is also weighing down on sentiments. For now, the greenback is the strongest one, followed by Yen and Swiss Franc. Australian Dollar is leading commodity currencies lower.

Technically, as noted earlier, WTI oil’s (currently at 26.2) break of 4 hour 55 EMA is opening up the case for retesting 20.40 low. The development could drag down stocks and lift Dollar and Yen. As USD/JPY recovers after drawing support from 106.91, more upside could is mildly in favor. The greenback is having a slight upper hand over Yen.

EUR/USD’s break of 1.0892 minor support suggests that recovery from 1.0768 has completed. Deeper fall would be seen back to this support. Similarly, USD/CHF’s break of 0.9687 minor resistance suggests that pull back from 0.9797 has completed and further rise would be seen back to this resistance. 0.6213 resistance turned support in AUD/USD is a level to watch. Break will raise the chance of completion of whole rebound from 0.5506.

Empire State Manufacturing index dropped to -78.2 in April, down from -21.5. It’s the lowest level in the history of the survey “by a wide margin”. New orders and shipments declined at a record pace. Delivery times lengthened, and inventories fell. Employment levels and the average workweek both contracted at a record pace. Input price increases slowed considerably, while selling prices declined modestly.

San Francisco Fed President Mary Daly told WSJ that “I don’t expect a sharp V-shaped recovery” in the US economy after the coronavirus pandemic. Instead, she said “I expect something more like negative quarters of growth throughout 2020, and then a gradual return to positive growth in 2021.”

Daly remains “optimistic” that Fed can achieve the dual mandate of full employment and price stability. “But it’s going to take some time”. For now, Fed remains committed to keeping rates at rock-bottom levels until after the coronavirus passes.

Daly’s comment was a big contrast to St. Louis Fed President James Bullard. Bullard said yesterday there is “no reason” the economy can’t come back in a “V-shape” rebound. He added that a robust recovery can happen if it’s “managed appropriately”.

European Commission President Ursula von der Leyen urged members stage to take a “gradual approach” in exiting the coronavirus lockdown. And “every action should be continuously monitored”. Also, she laid down three main pre-conditions for the exit: 1. Significant decrease in the spread of the coronavirus 2. Sufficient health system capacity 3. Adequate surveillance and monitoring capacity

Separately, the WHO said lifting of lockdowns should be down in stages of two weeks. WHO said: “To reduce the risk of new outbreaks, measures should be lifted in a phased, step-wise manner based on an assessment of the epidemiological risks and socioeconomic benefits of lifting restrictions on different workplaces, educational institutions, and social activities… Ideally there would be a minimum of 2 weeks (corresponding to the incubation period of COVID-19) between each phase of the transition, to allow sufficient time to understand the risk of new outbreaks and to respond appropriately.”

Australia Westpac Consumer Sentiment dropped sharply by -17.7% to 75.6 in April. That’s the single biggest monthly decline in the 47 year history of the survey. The index also dived through the trough during 2008-2009 global financial crisis, to the levels only seen during the deep recessions of the early 1990s (64.6) and early 1980s (75.5).

Though, Westpac chief economist Bill Evans noted that “Australia’s pandemic experience to date has been much less debilitating than that of the hardest hit areas abroad… Recent evidence showing a clear slowing in new cases that indicates policy measures are working to contain the spread.” He expected the economy to be lifted in the December quarter following “three consecutive quarters of economic contraction”.

Regarding the upcoming RBA meeting on May 5, Evans said “It seems likely that the Board considers it has done its duty to support the economy and will now look to governments if further support for the economy is required.”

China’s PBoC cut the interest rate on its one-year medium-term lending facility today, by 20bps to 2.95%. That’s the lowest level on record and is expected to inject CNY 100B into the market. The move should also pave the way for a similar reduction in the benchmark Loan Prime rate later on the 20th, to lower financing costs for businesses.

Earlier in the month, PBoC announced to cut the RRR for small banks to release reserves. The first phase would take effect today, and free up around CNY 200B of long-term funds. A total of CNY 400B of liquidity is expected after the second-phase of reserve ratio cut due in mid-May. 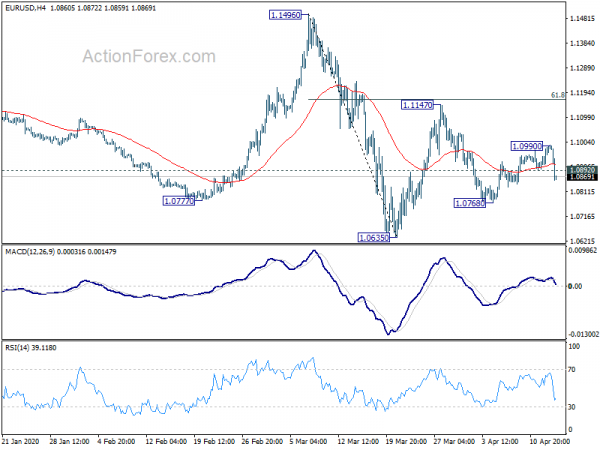 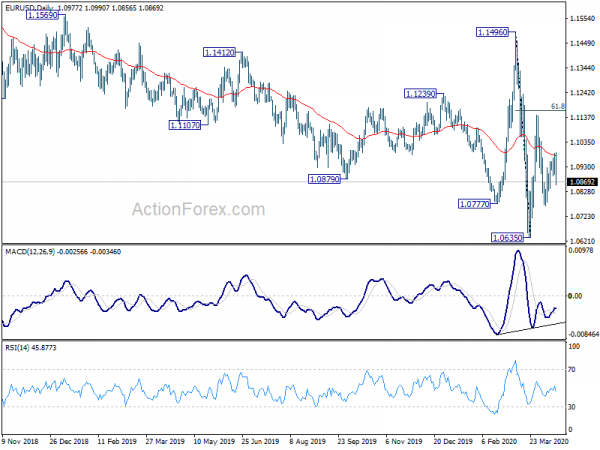