Euro tumbles broadly today, together with the Swiss Franc, after Germany’s constitutional court has ruled that ECB’s stimulus program is partly in conflict with the country’s law. ECB has to prove that it’s QE program isn’t providing monetary financing to heavily indebted governments. The German government is also required to get assurance from the ECB that economic and fiscal impact of QE was properly balanced against its monetary policy objectives. Otherwise, the Bundesbank may no longer participate in the implementation and execution of ECB’s program.

Staying in the currency markets, as lifted by rebound in oil prices and stock markets, Canadian Dollar is currently the strongest one, followed by Australian. Dollar is the third weakest following Euro and Swiss. Technically, EUR/USD’s decline today now put 1.0727 support back into focus, break will target 1.0635 low. Similarly, USD/CHF is eyeing 0.9802 resistance again and break will target 0.9901 high. Also, EUR/GBP and EUR/JPY are also eyeing 0.8670 and 115.44 support too. Break will resume recent declines.

US trade deficit rose to USD -44.4B, deficit with China shrank

Bundesbank President Jens Weidmann said a rapid and strong economic recovery is unlikely for Germany, as coronavirus measures are likely to remain in place for a long time. Though, he still expect a sustained recovery once the pandemic is totally over.

As for fiscal stimulus, Weidmann said it’s not the time for them yet as social distance measures remain in place. He added, “a stimulus programme could make sense if a recovery didn’t properly get going later on.”

Tim Moore, Economics Director at IHS Markit: “Historical comparisons of the PMI with GDP indicate that the April survey reading is consistent with the economy falling at a quarterly rate of approximately 7%, but we expect the actual decline in GDP could be even greater, in part because the PMI excludes the vast majority of the self-employed and the retail sector.

“While output, new work and employment indices all hit all-time lows in April, survey respondents indicated a tentative upturn in their business expectations amid hopes that a gradual re-opening of the economy can be achieved in the summer. However, service providers looking to re-establish business operations overwhelmingly commented that capacity would remain well below previous levels for an extended period and any timings remain highly uncertain.”

Swiss SECO consumer climate dropped to -39 in Q2, down from -9. That’s well below the lowest level seen in the 2008-2009 financial and economic crisis. The only other time consumer sentiment values have been this low was in the early 1990s in the wake of the real estate crisis, when the Swiss economy suffered a prolonged recession with a dramatic rise in unemployment.

RBA left monetary policy unchanged today as widely expected. The cash rate is held at 0.25%. The bank “will not increase the cash rate target until progress is being made towards” the dual mandate of full employment and inflation target.

Target for 3-year government bond yield is also kept at 0.25%. Global financial markets are working “more effectively” and Australian government bond markets has “improved”. Hence, RBA scaled back the size and frequency of purchases, which “to date have totalled around $50 billion”. Though, the 3-year yield target will “remain in place” and the bank is “prepared to scale up” the purchases if necessary.

In the baseline scenario for the economy, RBA said output would fall by around -10% over H1 2020 and around -6% over the year. There would be a bounce-back of 6% in 2021. Unemployment rate would peak at around 10% over the coming months and stay above 7% by the end of 2020. Inflation will remain below 2% target over the next few years in the various scenarios considered. In the baseline scenario, inflation will be at 1-1.5% in 2021 and gradually picks up further from there. 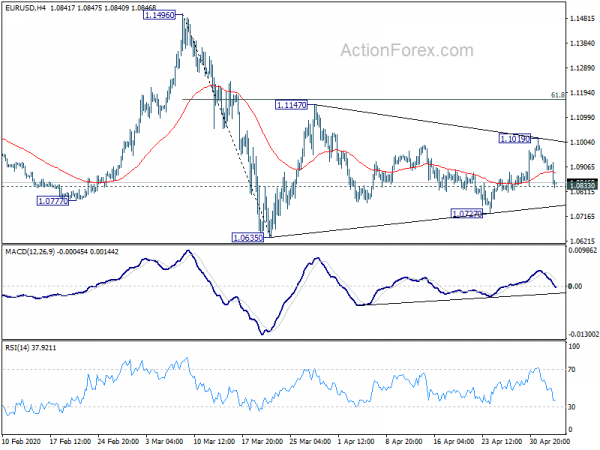 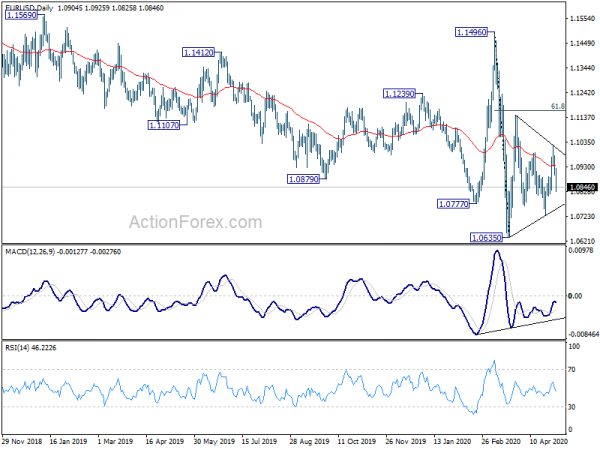