Action Forex
HomeAction InsightMarket OverviewStocks Weighed Down By Fed Powell, Yen and Dollar Back in Control

Stocks Weighed Down By Fed Powell, Yen and Dollar Back in Control

Yen and Dollar are back in control today as Asian markets turned red, following weakness in the US overnight. Fed Chair Jerome Powell’s comments somewhat disappointed investors. Australian Dollar weakens in general after data showed record contraction in employment. Though, Sterling is the worst one as it stays pressured after yesterday’s downside breakout.

Technically, GBP/USD’s break o f 1.2247 support yesterday should indicate completion of recent rebound from 1.1409. Further fall should be seen to retest this low. GBP/JPY also resumed the fall from 135.74 by taking out 130.64 temporary low. The development reaffirms the case that corrective rise from 123.94 has completed. Deeper decline should be seen to retest this low too. Despite today’s weakness, AUD/USD is still staying in range of 0.6372/6569. Near term reversal is building up with bearish divergence condition in 4 hour MACD. But 0.6372 support needs to be taken out first. 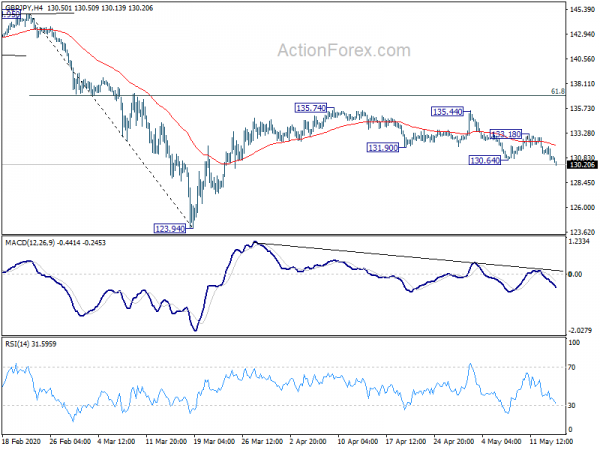 “The large drop in employment did not translate into a similar sized rise in the number of unemployed people because around 489,800 people left the labour force”, stated Bjorn Jarvis, head of labour statistics at the ABS. “This means there was a high number of people without a job who didn’t or couldn’t actively look for work or weren’t available for work”.

US stocks closed lower overnight and risk aversion carries on in Asian session. Investors were somewhat disappointed by Fed Chair Jerome Powell’s rejection of negative interest rates. Additionally, he’s rather cautiously pessimistic with his comments on the recovery.

In short, Powell said “the committee’s view on negative rates really has not changed. This is not something that we are looking at.” While “there are fans of the policy” of negative rates, he added, “for now, it’s not something we’re considering”. He emphasized “we have a good toolkit and that’s the one that we will be using.”

On the economy, Powell is the trajectory is “highly uncertain and subject to significant downside risks.” “There is a sense that the recovery may come more slowly than we would like, but it will come. And that may mean that it’s necessary for us to do more.” 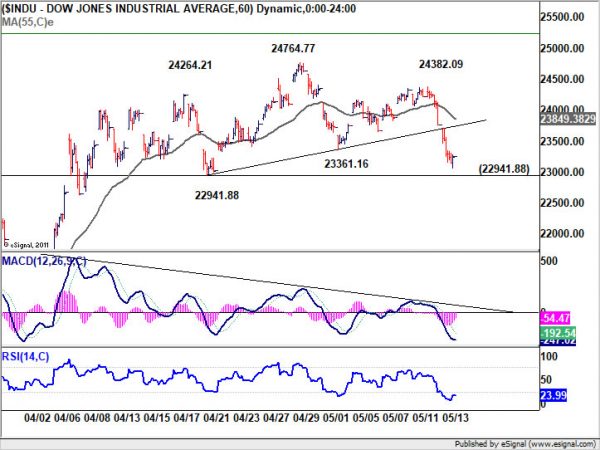 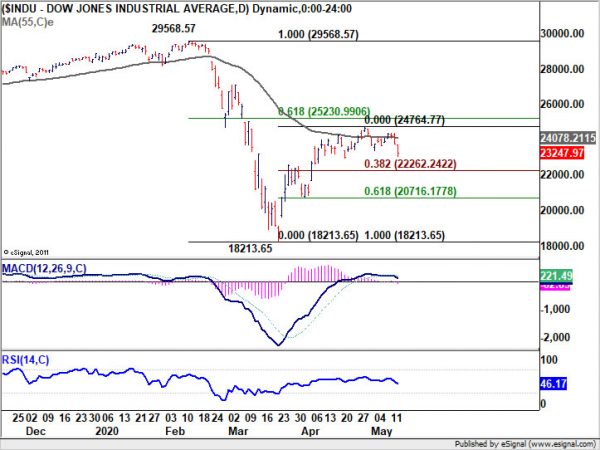 San Francisco Fed President Mary Daly said overnight that the phased reopening of economy “by definition translates to a slow recovery as we put toes in the water, see if the virus flares up when we go back to some economic activity.” “If it doesn’t, we can gain some momentum, people will be more confident; but if it does then people are going to be more cautious and that will slow the recovery even further,” she added. “Whichever scenario occurs, this is going to be a slow recovery and not a sharp rebound.” Also, under most scenarios “the economy is going to need more support, in all likelihood.”

Separately, Treasury Secretary Steven Mnuchin said Q2 is expected to be “pretty bad”. But with economy reopened safely, next year “we’ll be back to having a quick economy”. He added that President Donald Trump was open to more fiscal spending. However, “we’re not in a rush to do that this week or next week. We’re going to take our time.”

Intraday bias in AUD/USD remains neutral at this point as range trading continues. Another rise could be seen through 0.6569 resistance. But considering bearish divergence condition in 4 hour MACD, upside should be limited by 0.6670 key resistance, at least on first attempt. On the downside, break of 0.6372 support should confirm short term reversal and bring deeper fall to 38.2% retracement of 0.5506 to 0.6569 at 0.6163 first. 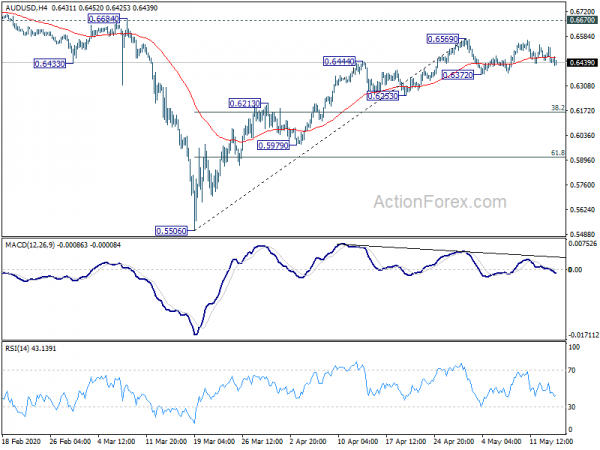 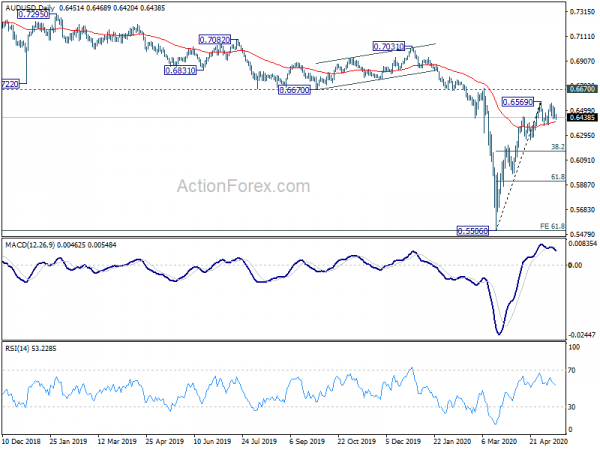