Dollar recovers mildly in Asian session, together with Yen, as stock rally takes a breather again. But both remains the worst performing over the week. Similarly, Australian and New Zealand Dollars also retreats mildly but remain the strongest one for the week. Investors are generally optimistic on return to normal, with lockdown exits and help from coronavirus vaccine. Yet, the path remains highly uncertain as PMI data from Japan and Australia already showing the shift from services recession to manufacturing. PMIs from Eurozone, UK and US might follow and paint similar picture. We’ll see.

Technically, Sterling’s weakness could be a focus today. In particular, EUR/GBP is now pressing 0.8987 near term fibonacci resistance. Sustained break there will suggests that rebound from 0.8670 is reversing whole fall from 0.9499, rather than just correcting it. Further rise could be seen to next fibo level at 0.9182 and above. GBP/JPY also appears to be losing momentum ahead of 133.18 resistance, keeping near term outlook bearish. Focus could be back to 129.27 temporary low very soon. 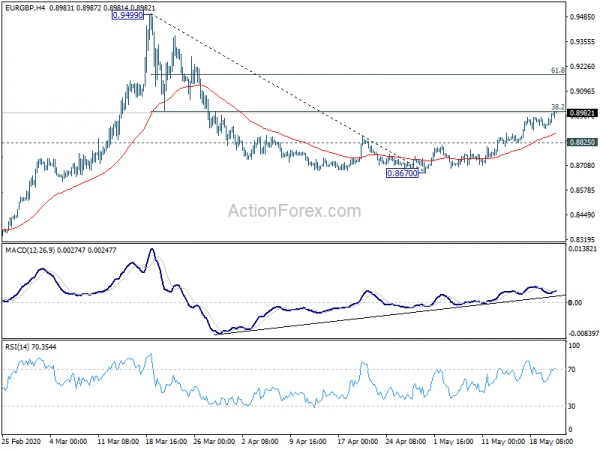 Japan exports dropped most in a decade in April

Japan PMIs: Potential hit to Q2 could be as large as 20% on previous year

Joe Hayes, Economist at IHS Markit, said latest data provide “yet another shocking insight into the devastating impact of the COVID-19 outbreak”. “Plummeting demand for goods is finally catching up with manufacturing sector”. Taking April and May data together, they’re indicative of GDP falling at an annual rate in excess of 10% and the economy is going to contract for a third straight quarter. Potential hit to Q2 could be as large as 20% on the previous year.

Also, “damage to the manufacturing sector could continue to worsen as global trade conditions deteriorate and the global economic recovery is slow”.

Australia CBA PMI composite recovered to 26.4, May should mark the low point

CBA Head of Australian Economics, Gareth Aird said: “May should mark the low point in the PMIs and we would expect activity to lift from here on a monthly basis. Company views on the economic outlook have improved and the lift in confidence is welcome. That said, it will be a long time before activity returns to pre-COVID-19 levels. And deflationary pressures highlight the huge amount of slack we have now in the economy.”

Australian Treasury Secretary Steven Kennedy said the peak of unemployment “would come through in these months in April and May”. He told a senate committee, “we’d be pretty close to it would be my guess”. Though, “in a measured sense, the unemployment rate may well rise between May and June because of the switch between out of the workforce and back into the workforce.”

He added that “we’ve gone well past the world recession” but it’s hard to predict if a depression was looming. Return of consumer and business confidence was the hardest part of forecasting the recovery. And, “the question is whether you’ve avoided the destructive cycles of firms going broke because they just ran out of cash.”

RBNZ Ha: Won’t lower OCR until next March since banking system is not ready

New Zealand Dollar is trying to extend this week’s recovery as the chance of RBNZ negative rates is fading. RBNZ chief economist Yuong Ha said in a webinar that he didn’t expect interest rate to be lowered further from the current level of 0.25% this year.

“We expect to hold it there for the next 12 months, until March next year,” he said. “We’re not planning on taking it lower at this stage, simply because the banking system is not ready for lower OCR rates at the moment. We’ve given the banking system until the end of the year to get ready so that the option is there for the Monetary Policy Committee in a year’s time.”

Though, he also noted that the MPC has “the ability to continue to monitor, revise, reassess and re-evaluate our decisions and the effectiveness of our decisions and do whatever it takes to get us back to our medium-term objectives.”

Separately, Westpac also revised their forecast and expect RBNZ to cut OCR to -0.50% in April 2021, rather than November 2020. It said the timing of negative rate “would depend on how long it takes for trading banks to become operationally ready for a negative OCR”. As RBNZ has asked trading banks to ready themselves for negative OCR by December 1 this year, a negative OCT “will be operationally possible from the start of 2021.

“A number” of members saw a “substantial likelihood of additional waves of outbreak” which would lead to a “protracted period of severely reduced economic activity.” “With another round of strict restrictions on social interactions and business operations, was assumed to begin around year-end, inducing a decrease in real GDP, a jump in the unemployment rate, and renewed downward pressure on inflation next year,” the summary said.

The Committee would “continue to monitor the implications of incoming information for the economic outlook, including information related to public health, as well as global developments and muted inflation pressures, and would use the Committee’s tools and act as appropriate to support the economy.”

GBP/USD weakens mildly after failing to sustain above 4 hour 55 EMA. But it’s staying above 1.2065 temporary low. Intraday bias remains neutral first. Near term outlook stays bearish as long as 1.2467 resistance holds and further decline is in favor. We’ll holding on to the view that corrective rise from 1.1409 should have completed. On the downside, below 1.2065 will target a test on 1.1409 low. However, on the upside, break of 1.2467 will turn bias to the upside for 1.2647 resistance. 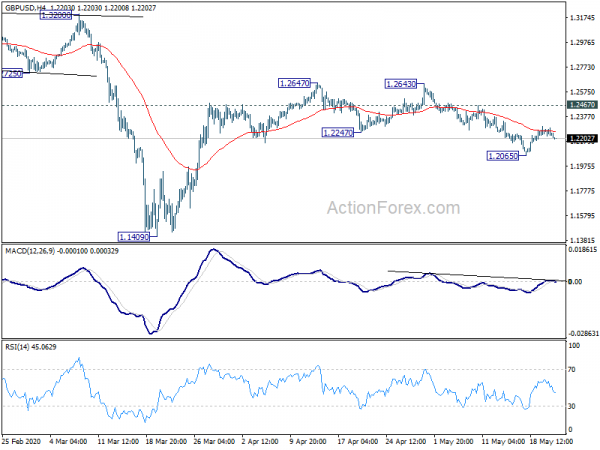 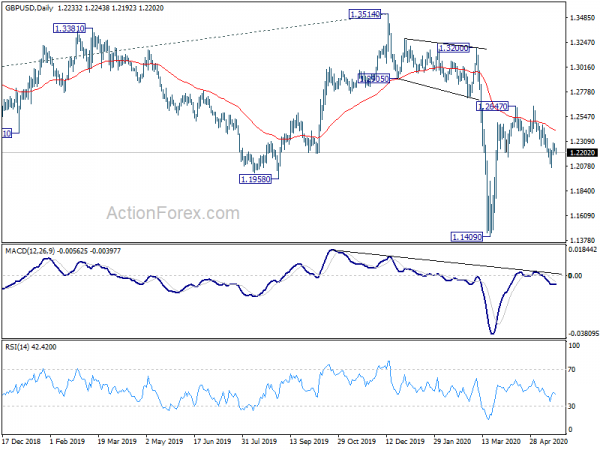 OPEC’s Meeting May Not Wreck the Bullish Oil Run