Asian markets strengthen generally as investors put Hong Kong tensions behind for the moment. Sentiments are also somewhat lifted as PBoC pledged to continue with targeted easing measures. Commodity currencies are generally higher as led by New Zealand Dollar for now. Yen and Dollar are the weakest ones, followed by Swiss Franc. Some more volatility would likely be seen as UK and US are back from holiday.

Technically, EUR/USD, EUR/JPY and EUR/CHF recover after drawing support from 4 hour 55 EMA, keeping favor on more near term upside. However, EUR/AUD is now back pressing key support zone of 1.6538/6597. Sustained break there will carry larger bearish implication and would target 1.5962.6085 support zone next. If that happens, it would likely be more of an indication of Aussie strength, than Euro weakness. We might probably see AUD/USD break through 0.6618 temporary top to take on key resistance level at 0.6670 in accordance. 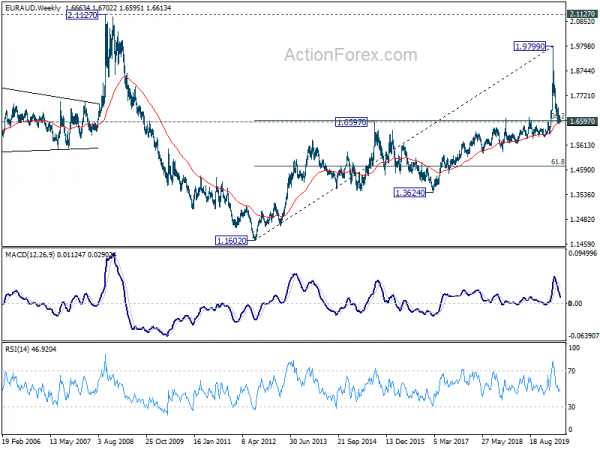 PBoC to continue with targeted easing as domestic economy improves

PBoC Governor Yi Gang said the Chinese central back will continue with the current targeted easing, even though domestic economy is improving. The targeted measures will ensure sufficient liquidity, lower borrowing costs and provided cheap credits. The measures have been working well and PBoC is planning to make the policy more precise.

Nevertheless, he still warned that the global economy is facing severe challenge. The current downturn “will very likely be worse than the global financial crisis in 2008 and even the Great Recession.”

In the Semiannual Report on Currency and Monetary Control, BoJ Governor Haruhiko Kuroda said the “powerful monetary easing measures” will support economic and financial activities, together with the government’s coronavirus measures. He also reiterated the pledge to monitor the coronavirus impacts and BoJ “will not hesitate to take additional easing measures if necessary.”

He noted again that the economy has been in an “increasingly severe situation” and is “likely to remain the case”. But thereafter. the economy is “likely to improve” supported by accommodative financial conditions and government’s measures, as well as through the “expected materialization of pent-up demand and a projected recovery in production from the decline brought about by the spread of COVID-19.”

Still, outlook is “extremely unclear” depending on ” the timing of the spread of COVID-19 subsiding and on the magnitude of the impact on domestic and overseas economies”. Risks are “skewed to the downside.

BoC Governor Stephen Poloz delivered his final speech yesterday, before stepping down next week. He noted that the “dominant concerns” for the coronavirus crisis response was “was with the downside risk and the possibility that deflation could emerge.”

“Deflation interacts horribly with existing debt, the two main ingredients of depressions in the past,” he added. “In effect, then, we were saying that the downside risks were sufficiently dire that there were no relevant trade-offs for monetary policy-makers to consider.”

He admitted that the actions will “clearly lead to higher indebtedness, for governments in particular”. Getting the economy back onto its growth track is “the surest means of servicing those debts over time”.

However, with the situation “more like a disaster than a recession”, confidence is expected to be “buttressed by fiscal income supports” and a “reasonably swift return to growth”. But, “any structural damage, such as business failures and labour market scarring, will of course take longer to repair.”

ECB Governor Council member Francois Villeroy de Galhau hinted that the central bank might boost the EUR 750B  Pandemic Emergency Purchase Program ahead. “It is in the name of our mandate that we will very probably need to go even further”, he said in a conference in Pari. “It is its very flexibility that should make the pandemic emergency purchase program our preferred marginal instrument for dealing with the consequences of the crisis.”

With the program, bone purchases could target countries with sharper rises in treasury yields. “Depending on market dynamics and liquidity conditions – and where these exhibit unwarranted gaps or there are risks of excessive volatility – certain national central banks must be able to purchase significantly more, and others significantly less, while ensuring the risks remain unshared,” Villeroy said.

Looking ahead, Germany Gfk consumer sentiment, Swiss trade balance and UK CBI realized sales will be featured in European session. US house price indices and new home sales will be released too. But main focus will be on consume confidence.

Intraday bias in GBP/USD remains neutral despite current recovery. Focus is back on 1.2296 resistance. Firm break there should come with sustained trading above 4 hour 55 EMA. That would indicate completion of the choppy fall from 1.2642, and argue that rebound from 1.1409 is not completed. Intraday bias will be turned back to 1.2647 resistance. However, as long as 1.2296 resistance holds, another fall will remain mildly in favor. Break of 1.2065 will target a test on 1.1409 low. 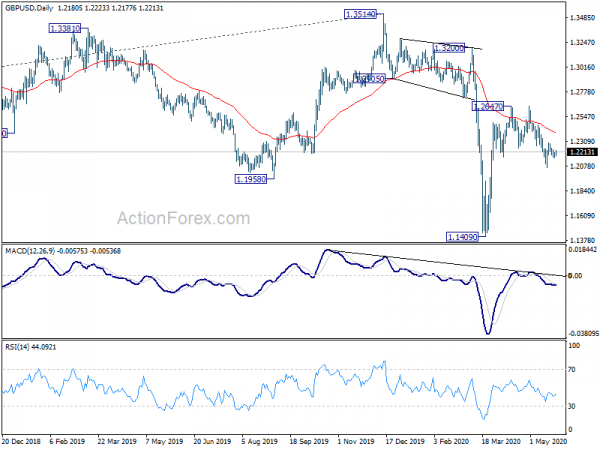