Risk appetite remains generally firm in European session but trading has turned a bit subdued with France, Germany and Swiss on bank holiday. Dollar is trying to recovery entering into US session, but remains one of the weakest, along with Yen and Swiss France. Australian Dollar is leading commodity currencies higher while Euro is losing some upside momentum. Gold dips mildly today and it’s back below 1740. If the greenback is to recovery, some deeper pull back in gold should be seen in according to confirm momentum.

Technically, Euro seems to be losing much of last week’s upside momentum. In particular, EUR/AUD is heading back to 1.6453 support break will resume the decline from 1.9799. More importantly sustained trading below 1.6597 key support level will carry larger bearish implication and target 1.6085. EURCAD is also back pressing 4 hour 55 EMA. Break will suggest that rebound form 1.5054 has completed. Corrective pattern from 1.5991 would then extend with another fall to retest 1.5054. 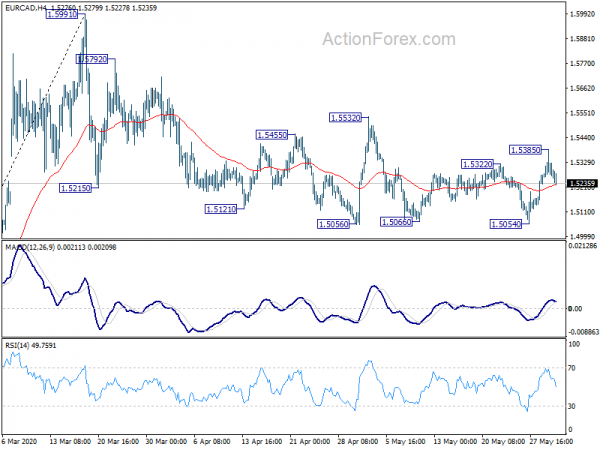 UK PMI manufacturing finalized at 40.7, one of the toughest recovery environments manufacturers have to face

UK PMI Manufacturing was finalized at 40.7 in May, up from record low of 32.6 in April. Output, new orders and employment fell sharply. Input price and output charge inflation remained moderate.

Rob Dobson, Director at IHS Markit: “Those who typically see the glass half empty will note that the UK manufacturing sector remained mired in its deepest downturn in recent memory. Output, new orders and employment fell sharply again in May as restrictions to combat the spread of COVID-19 caused further widespread disruptions to economic activity, demand and global supply chains.

“However, the glass-half-full perspective is one where the rate of contraction has eased considerably since April, meaning – absent a resurgence of infections – the worst of the production downturn may be behind us. Pressure on manufacturers should ease further as lockdown restrictions are loosened, customers return to work and global activity restarts.

“However, changes to working practices, uncertainty about how long the COVID-19 restrictions may be in place for, weak demand and Brexit worries all suggest the UK is set for a drawn-out economic recovery. This will make the “new normal” one of the toughest recovery environments many manufacturers will ever have to face.”

Eurozone PMI manufacturing finalized at 39.4, at least some stabilization, potentially return to growth

Eurozone PMI Manufacturing was finalized at 39.4 in May, up from April’s 33.4. Markit noted that while there was a rebound in the headline PMI, there were sharp falls in new orders and output recorded. Also, job losses mount as manufacturers remained downbeat about outlook. Among the member states, all readings stayed below 50, with Germany at 36.6, Spain at 38.3, Austria at 40.4, France at 40.6, Greece at 41.1, Italy at 45.4.

Chris Williamson, Chief Business Economist at IHS Markit said: “The manufacturing downturn looks to have bottomed-out in April, with production falling at a markedly slower rate in May. The improvement in part merely reflects the comparison against a shockingly steep fall in April, but more encouragingly was also linked to companies restarting work as virus lockdowns were eased. The further lifting of COVID-19 restrictions in coming months should provide a further boost to manufacturers.

“While we are still set to see unprecedented falls in industrial production and GDP in the second quarter, the survey brings hope that the goodsproducing sector may at least see some stabilisation – and even potentially a return to growth – in the third quarter. Whether growth can achieve any serious momentum remains highly uncertain, however, as demand – both domestically and in export markets – looks set to remain subdued by social distancing measures, high unemployment and falling corporate profits for some time to come.

Japan PMI Manufacturing is finalized at 38.4 in May, down from April’s 41.9, lowest since March 2009. Markit said production fell at sharper rate as coronavirus disruption continued. New orders plummeted to an extend not seen since the global financial crisis. Suppliers’ delivery times lengthened sharply once again.

Joe Hayes, Economist at IHS Markit, said: “While easing lockdown measures will be positive for the economic environment, it is clear that dislocations will remain, which will continue to hinder supply chains, impact global trade and make operating conditions challenging for manufacturers. Until we see a sustained improvement in demand, manufacturing conditions are likely to remain fragile.”

Also from released, capital spending rose 4.3% in Q1, versus expectation of -4.2% decline.

AIG noted: Exporters noted that many overseas markets have essentially shut down. They also noted higher prices for air freight into international markets that are still open to them. … Many manufacturers reported that orders from their regular customers have been delayed or cancelled altogether because of the pandemic.” 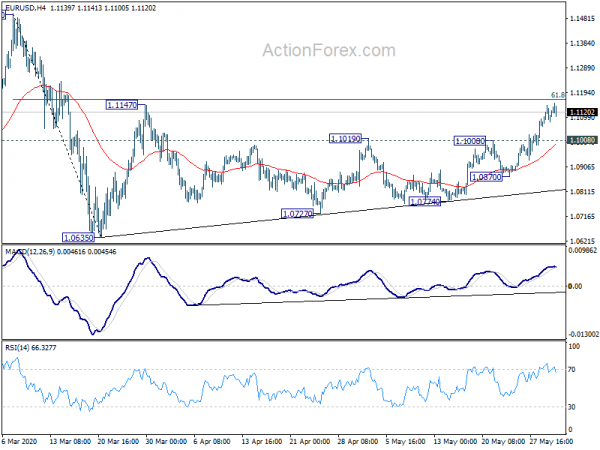 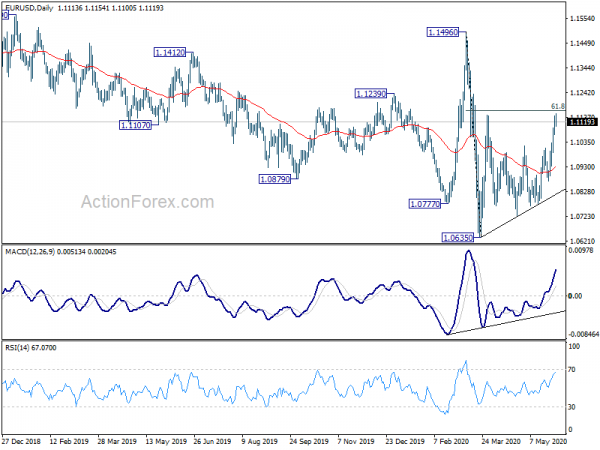