Euro strengthens again after ECB announced expansion of its crisis asset purchase program PEPP. Euro is also taking Swiss Franc mildly higher too. On the other hand, Sterling is the weakest one as pressured by the selloff against Euro. Canadian Dollar is following as the second weakest for the moment. Other currencies are generally mixed, in response to mildly weaker stocks. Dollar, in particular, still lacks decisive buying for a sustainable rebound, and would look into tomorrow’s non-farm payroll report.

Technically, EUR/USD resumes recent rise by taking out 1.1257 temporary top. EUR/GBP’s focus is back on 0.9054 resistance with today’s recovery and break will also resume recent rebound. EUR/CHF is staying in consolidation from 1.0819 and would likely extend sideway trading. A focus for the rest of the week will be on 108.42 minor support in USD/JPY. Break could open up more downside in the greenback elsewhere.

ECB announced to increase the pandemic emergency purchase programme (PEPP)  by EUR 600B to a total of EUR 1350B today. Purchases will continue to conducted in a “flexible manner over time, across asset classes and among jurisdictions”.

Also, the horizon of PEPP net purchases will be extended to “at least the end of June 2021”. Additionally, “the Governing Council will conduct net asset purchases under the PEPP until it judges that the coronavirus crisis phase is over.” Maturing principal payments will also be reinvested “until at least the end of 2022”.

Asset purchase programme net purchase will continue at monthly pace of EUR 20B and it’s expected to “run for as long as necessary”. Reinvestments of principal payments will also continue, “for an extended period of time”.

Interest rates are held unchanged, with main refinancing rate at 0.00%, marginal facility rate at 0.25% and deposit rate at -0.50%.

In the post meeting press conference, ECB President Christine Lagarde said economic data have shown some signs of a “bottoming-out” in the economy, alongside the gradual easing of coronavirus containment measures. But “the improvement has so far been tepid compared with the speed at which the indicators plummeted in the preceding two months.”

EU retail sales dropped -11.1% mom. Among Member States for which data are available, the largest decreases in the total retail trade volume were registered in Malta (-25.1%), Romania (-22.3%) and Ireland (-21.9%). The only increase was observed in Finland (+0.3%), while the volume in Sweden remained stable.

Andrew Hauser, BoE Executive Director for Markets said even if negative interest rate is the right thing to do, “it’s not going to happen in the near term”. He added, “it’s on the retail side and banking side that we need to think more about it, and no decisions have been made about that either way.”

He also warned, “financial markets could come under strain again if there is another leg to the global infection cycle, or if economic data come out persistently worse than expected.”

UK PMI construction rose notably to 28.9 in May, up from 8.2, but missed expectation of 30.0. Still, it was the second lowest level since February 2009 and stayed well below 50 handle. Markit said that severe weakness persists during May, despite gradual reopening of construction sites. There were rapid falls in new orders amid projection cancellations. Supply chain disruptions also remained widespread.

Tim Moore, Economics Director at IHS Markit: “A gradual restart of work on site helped to alleviate the downturn in total UK construction output during May, but the latest survey highlighted that ongoing business closures and disruptions across the supply chain held back the extent of recovery.”Survey respondents often commented on the cancellation of new projects and cited concerns that clients would scale back spending through the second half of 2020, especially in areas most exposed to a prolonged economic downturn.

“With construction firms anticipating a reduced pipeline of work and fewer tender opportunities, business expectations for the next 12 months remained negative in May. Since the start of the lockdown period in March, business sentiment has remained more downbeat than at any time since October 2008.”

Australia retail sales dropped -17.7% mom, more than double of March’s pre-lockdown surge of 8.5% mom. “COVID-19 continued to affect retail trade in April with many retail businesses closing their physical stores during April due to restrictions relating to social distancing” said Ben James, Director of Quarterly Economy Wide Surveys. “There were record falls in cafes, restaurants and takeaway food services (-35.4%), and clothing, footwear and personal accessory retailing (-53.6%), as well as a large fall in department stores (-14.9%).”

EUR/USD’s rally resumes after brief consolidations and intraday bias is back on the upside. Current rise should target 1.1496 key resistance next. Decisive break there will carry larger bullish implications. On the downside, break of 1.1186 minor support will turn intraday bias neutral again and bring more consolidations first. 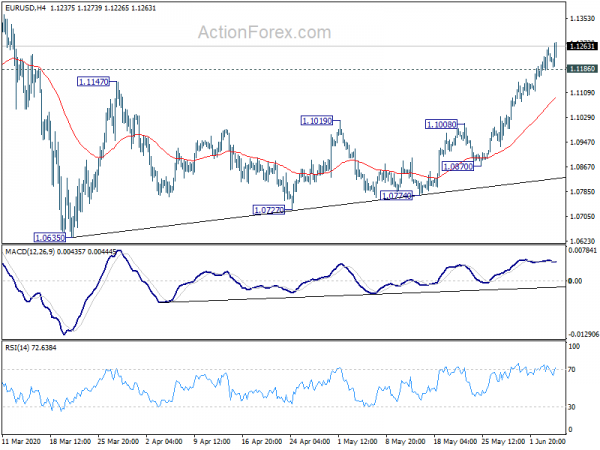 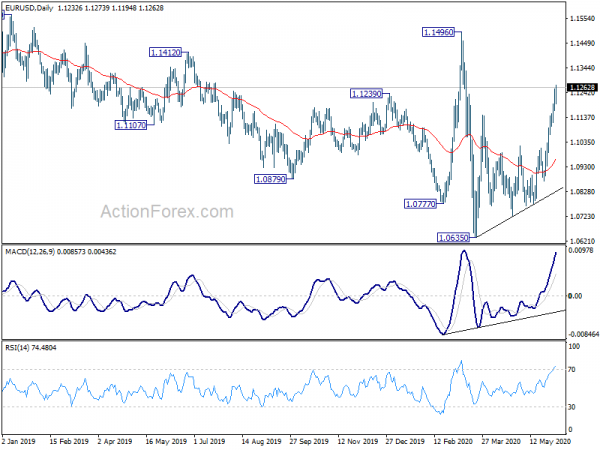