Dollar remains generally weak today as recovery attempts faltered quickly. Though, selling remains centered against European majors and Yen. FOMC monetary policy decision is a focus today but it’s unlikely to give the greenback any sustainable support. Overall, major pairs and crosses are bounded inside yesterday’s range, though. Gold and silver are also consolidating below yesterday’s spike highs.

Fitch affirmed Japan’s Long-Term Foreign-Currency Issuer Default Rating (IDR) at “A”, but downgraded the outlook to negative from stable. The rating agency said: “The coronavirus pandemic has caused a sharp economic contraction in Japan, despite the country’s early success in containing the virus… The Negative Outlook reflects that the higher debt ratio and downside risks to the macroeconomic outlook will nevertheless exacerbate the challenge of placing the debt ratio on a downward path over the medium term.”

The rating agency also expects BoJ to maintain current interest-rate setting through “at least the end of 2022” under the YCC framework. It expects BoJ to “refrain from” cutting interest rate further because of the impact on “bank profitability”. Rather, “an extension of temporary quantitative easing programmes beyond their expiry in March 2021 or refinements to its forward guidance remain more likely.” Fitch also projects headline CPI of -0.6% at the end of 2020 and turns marginally positive in 2021.

Nevertheless, the quarterly decline was mainly the result of free child care (-95%), a significant fall in fuel price (-19.3%) and a fall in pre-school and primary education (-16.2%). Excluding these three components, the CPI would have risen 0.1% qoq in Q2.

Mike Watkins, Head of Retailer and Business Insight, Nielsen: “There was no further upwards pressure on shop prices in food during July and deflation continues across the non-food channels.”

Fed to hold its cards until September

FOMC rate decision is a major focus today but there is little expectation on anything dramatic there. Fed funds rate will be held at 0.00-0.25%. The unlimited asset purchase program will continue at a pace of USD 80B for treasuries and USD 40B for MBS. There might be change to forward guidance though, to tie future rate hike to employment and inflation. But the big changes will be held until September.

By September meeting, Fed should have completed the policy framework review. Congress should have passed any additional fiscal stimulus. More information will be obtained regarding the economy, in particular with second wave of coronavirus infections in effect. Updated economic projections will also be completed.

Intraday bias in USD/JPY remains on the downside for the moment. Current fall is part of the decline from 111.71 and should target 100% projection of 111.71 to 105.98 from 109.85 at 104.12 next. On the upside, above 105.68 minor resistance will turn intraday bias neutral again and bring consolidation. But recovery should be limited below 106.63 support turned resitsance to bring another decline. 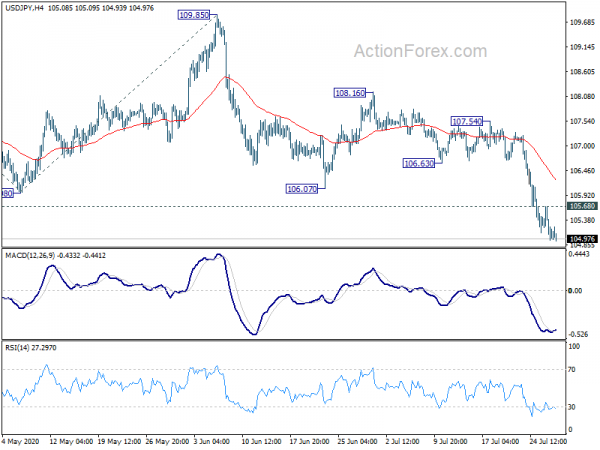 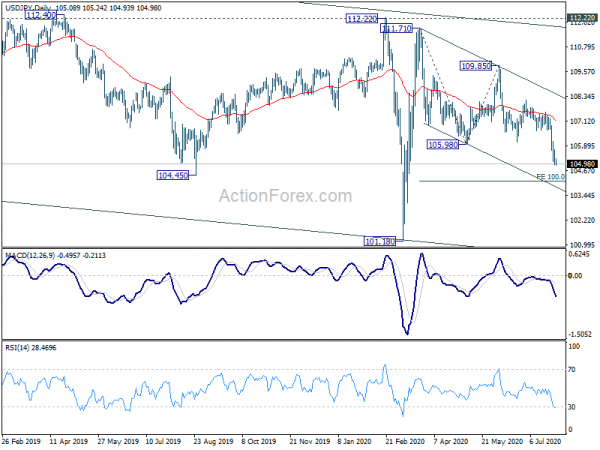