Sterling strengthens generally today after BoE stands pat. Even though investments remained weak, the central offered some optimism in the way that spending recovered significantly. At this point, Euro is the second strongest, followed by Yen. New Zealand Dollar and Canadian are the weaker ones. For the week, however, Dollar stays as the worst performing one, which is reflected also in the powerful rally in Gold. The greenback will need some extra-ordinary lift from non-farm payrolls report tomorrow to turn the corner.

Technically, GBP/USD’s breach of 1.3170 suggests rally resumption for 1.3303 projection level. EUR/GBP is a pair to watch today as it main head back to 0.8930 support. Meanwhile, GBP/JPY is eyeing 139.20/73 resistance and break will resume larger rise from 123.94. AUD/NZD is challenging 1.0865/80 resistance zone again. Decisive break there will resume whole rebound from 0.9994. That might translate into stronger rise in AUD/USD. 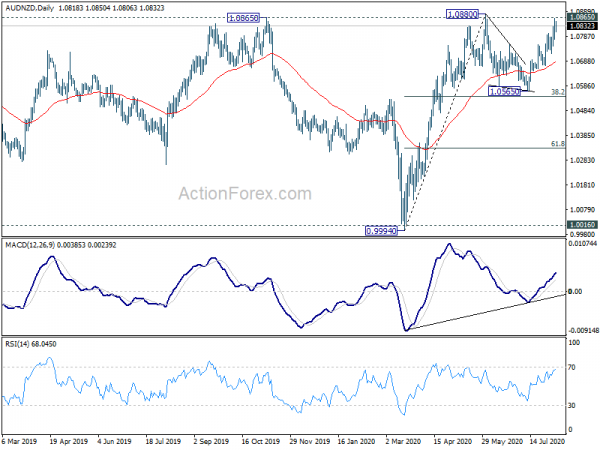 BoE left monetary policy unchanged as widely expected. Bank Rate is maintained at 0.1%. The asset purchase target is also held at GBP 745B. Both decisions were made by unanimous 9-0 votes. The Committee “does not  intend to tighten monetary policy until there is clear evidence that significant progress is being made in eliminating spare capacity and achieving the 2% inflation target sustainably.

On the economy, BoE expects UK GDP to have bee over -20% lower in Q2, comparing with Q4 2019. GDP is not expected to exceed Q4 2019 level until the end of 2021. Risks to GDP outlook are skewed to the downside. High-frequency indicators imply that “spending has recovered significantly” since April. Though, business investment is “likely to have fallen markedly in Q2” and investment intentions remain “very weak”.

Unemployment rate is projected to “rise materially” to around 7.5% by year end, “consistent with a material degree of spare capacity. CPI is expected fall further below the 2% target and average around 0.25% in the latter part of the year. But CPI is still expected to return to around 2% in two years’ time.

Australia Morrison: Victoria lock to shrink GDP further by AUD 7B to 9B in Q1

Australian Prime Minister Scott Morrison said Victoria’s stage 4 lockdown could shrink GDP between AUD 7B and AUD 9B in Q3. Overall impacts together with prior imposed restrictions in Melbourne could cost between AUD 10B to AUD 12B, an impact of around 2.5% of GDP. “Treasury’s assessed the impact of these new restrictions and notes there’s a high degree of uncertainty in relation to any of these estimates,” Morrison said. “This is a heavy blow.”

Also, headline unemployment could peak at close to 10%, with real unemployment rate at 13%. “It is estimated — the increase in effective unemployment — to be between 250,000 and 400,000,” Morrison said. “That isn’t necessarily people who have lost their employment, it also includes those whose employment has been reduced to zero hours.”

Fed Mester: Reopening may be more protracted than anticipated

Cleveland Fed President Loretta Mester said in a speech that “the increase in virus cases that we’ve seen in recent weeks has raised the downside risks to the outlook and is a stark reminder that there are several different scenarios that could play out”. The reopening phase maybe “more protracted than many had anticipated when it started”.

It’s “clear that more fiscal support is needed to provide a bridge for households, small businesses, and state and local municipalities that have borne the brunt of the economic shutdown until the recovery is sustainably in place”, she added.

On Fed’s side, even though policy rate is “already at its effective lower bound”, there are tools to provide additional accommodations, including “forward guidance about the future path of policy and purchases of longer-term Treasuries and agency mortgage-backed securities”.

Dallas Fed President Robert Kaplan said “the issue with the resurgence in the virus is it slowed down or somewhat muted the recovery we’ve been expecting”. Hence, “the better again we manage the virus, the better we’ll recover.”

“I believe the economy needs a continuation of the unemployment benefits,” Kaplan told CNN. “It may not need to be in the same form as it currently is, but we need a continuation.”

Fed Clarida expects rebound in activity in Q3, but course of economy is a complex picture

Fed Vice Chair Richard Clarida said he forecast the US to have a “rebound in economic activity in the third-quarter data”. However, “the course of the economy is going to depend on the course of the virus, and it’s a complex picture”.

Also, “there are a lot of moving parts with the virus and the global outlook.” One being additional fiscal support which the Congress and the White House are still struggling to reach an agreement. “The longer this drags on, the greater risk there is to long-term damage to the economy,” Clarida said. “I don’t think we’re at that point yet.”

Germany factory orders rose 27.9% mom in June, much higher than expectation of 9.5% mom. Italy will release industrial output while UK will release construction PMI. Later in the day, US will release jobless claims and Challenger job cuts. 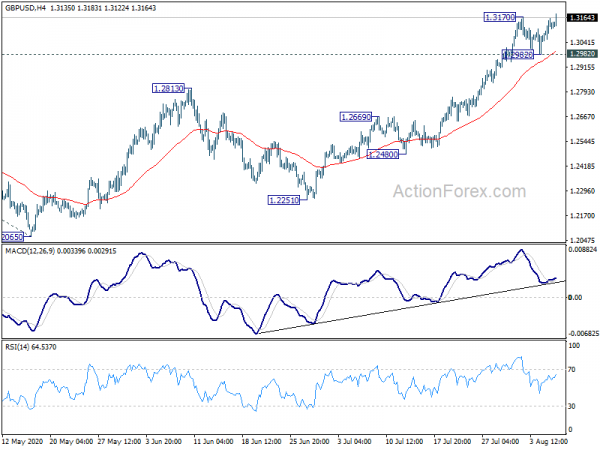 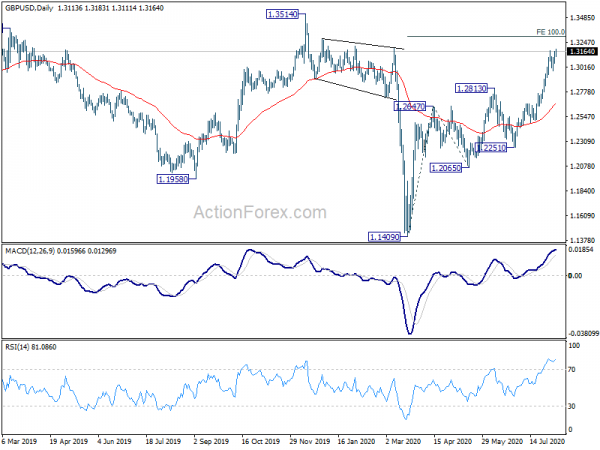