The markets turn into mild risk-off mode in Asia, after US President Donald Trump stepped up the tech war with China, by banning TikTok and WeChat. Commodity currencies are generally lower as lead by Australian Dollar. On the other hand, Dollar and Yen strengthen broadly. Nevertheless, for the week, the greenback is still the worst performing one. It will look into today’s non-farm payrolls report for some needed strengthen for rebound. Yet, disappointment is probably more likely then not.

Technically, Dollar’s rebound is not troubling Gold’s rally for now. as it edged higher to new record of 2075 earlier today. Upside momentum is diminishing mildly as seen in 4 hour MACD. But as long as 2028.34 minor support holds, Gold is still on track to 161.8% projection of 1451.16 to 1747.75 from 1670.66 at 2150.54. EUR/USD failed to sustain above 1.1908 and it’s probably extending the consolidation from there with another falling leg. But as long as 1.1695 support holds, further rally expected. However, break of 1.1695 will suggest short term topping and bring near term reversal. Reactions to NFP would decide the next move.

Asia markets tumble broadly, particularly serious in Hong Kong, after US President Donald Trump issued an executive order to ban China’s TikTok and WeChat apps. The orders will go into effect in 45 days, and block all transactions with TikTok’s owner ByteDance, and transactions involving WeChat. The move was made under the International Emergency Economic Powers Act, which allows the president to declare a national emergency, block transactions and seize assets, in response to “unusual and extraordinary threat”.

“To protect our Nation, I took action to address the threat posed by one mobile application, TikTok. Further action is needed to address a similar threat posed by another mobile application, WeChat,” Trump said. “This data collection threatens to allow the Chinese Communist Party access to Americans’ personal and proprietary information — potentially allowing China to track the locations of Federal employees and contractors, build dossiers of personal information for blackmail, and conduct corporate espionage”.

Year-to July, with US

In the Monetary Policy Statement, RBA revised down GDP projections for 2021, projecting a slower recovery. There were also upward revisions in unemployment rate forecasts and downward in inflation forecasts. The central bank also reiterated that currency intervention and negative rates no appropriate for the moment.

RBA said: “At a time when the value of the Australian dollar is broadly in line with its fundamentals and the market was working well, there was not a case for intervention in the foreign exchange market. Intervention in such circumstances is likely to have limited effectiveness.”

“The Board continues to view negative interest rates as being extraordinary unlikely in Australia. The main potential benefit is downward pressure on the exchange rate. But negative rates come with costs too. They can cause stresses in the financial system that are harmful to the supply of credit, and they can encourage people to save rather than spend.”

Looking ahead. US non-farm payrolls is the major focus today. Markets are expecting 1510k growth in July. But given the huge ADP miss, there is prospect of downside surprise. Unemployment rate is expected to drop back to 10.7%. Average hourly earnings are expected to dropped -0.5% mom. Canada will also release employment data, and Ivey PMI. 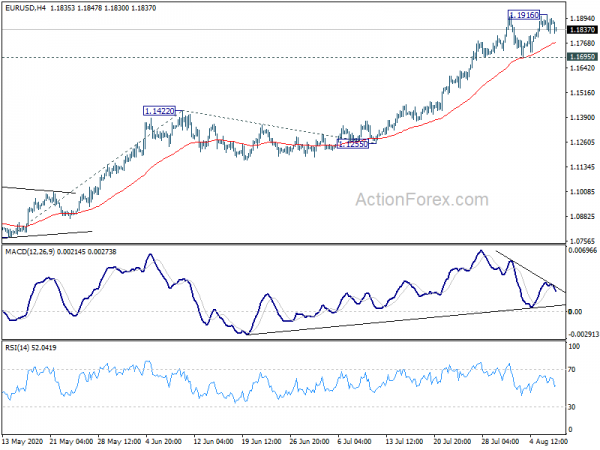 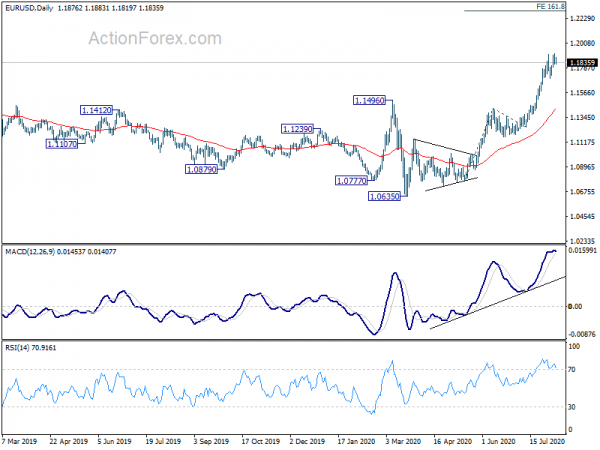