European majors, as well as stock indices, are boosted by better than expected Germany business sentiments, as well as small than expected Q2 GDP contraction. There were talks that investors welcomed the US-China trade phone calls. But judging from the decline in China and Hong Kong stocks, that might not be the reason. Meanwhile, commodity currencies are just mixed. On the other hand, Yen is trading generally lower, followed by Dollar by a distance.

Technically, Yen crosses defended near term support level well and maintain near term bullishness. Focuses will now turn to 126.75 resistance in EUR/JPY and 140.20 resistance in GBP/JPY. Break there will resume recent rally. AUD/JPY’s focus is also back on 76.86 resistance with today’s rebound. Break will resume larger rise from 59.89. 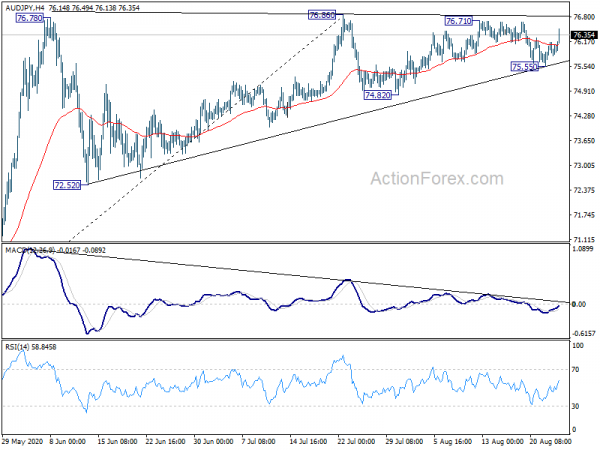 US Trade Representative Robert Lighthizer and Treasury Secretary Steven Mnuchin finally held a “regularly scheduled call” with Chinese Vice Premier Liu He to review the progress of the implementation of the trade deal phase one.

USTR said in a statement, the parties addressed steps that China has taken to “effectuate structural changes” for greater IP rights protections, “remove impediments” to Americans companies in financial services and agriculture, eliminate forced technology transfer. China’s purchases of US goods were also discussed. It added, “both sides see progress and are committed to taking the steps necessary to ensure the success of the agreement.”

Chinese Commerce Ministry also confirmed the two sides had a “constructive dialog on strengthening the coordination of the macroeconomic policies of the two countries”. Both sides “agreed to create conditions and atmosphere to continue to push forward the implementation of the phase-one of the China-US economic and trade agreement”.

German Ifo rose to 92.6, on road to recovery

Ifo said, “companies assessed their current business situation markedly more positively than last month. Their expectations were also slightly more optimistic. The German economy is on the road to recovery.”

Looking at some details, services posted marked improve to 7.8, up from 2.1. Service providers are “decidedly happier”. Manufacturing rose to -5.4, up from -12.1, but stayed negative as “many industrial companies still consider their current business to be poor”. Upward trend in trade “flattened noticeably, just edged higher to -4.8, up from -5.1. Construction rose from -2.5 to 0.0.

Germany Q2 GDP contraction was finalized by -9.7% qoq, revised up from -10.1% qoq. The single-digit decline was a pleasant surprise but it’s nevertheless still much larger that the -4.7% qoq recorded in Q1 2009 during the financial crisis. It’s also the sharpest contraction since quarterly calculations started back in 1970.

UK CBI realized sales balance dropped to -6% in the year to August, down from July’s 4%. They’re expected to drop further next month, at a faster rate of -17%. Employment balance in the retail sector dropped sharply, at -45%, sharpest pace since February 2009. Faster fall is expected in the quarter head at -52%.

Alpesh Paleja, CBI Lead Economist, said: “The furlough scheme has proved effective at insulating workers and businesses in some of the worst-hit sectors during the pandemic, but these findings reinforce fears that many job losses have been delayed rather that avoided.

“Indeed, the latest survey shows that trading conditions for the retail sector remain tough, even against the backdrop of business slowly returning. Firms will be wary of deteriorating household incomes and the risk of further local lockdowns potentially hitting them in the pocket for a second time.

EUR/USD recovers mildly today but stays well inside range of 1.1711/1965. Intraday bias remains neutral for the moment. As long as 1.1711 support holds, further rise is mildly in favor. On the upside, break of 1.1965 will extend the whole rise from 1.0635. However, considering bearish divergence condition in 4 hour MACD, break of 1.1711 should confirm short term topping. Intraday bias will be turned back to the downside for 55 day EMA (now at 1.1561). 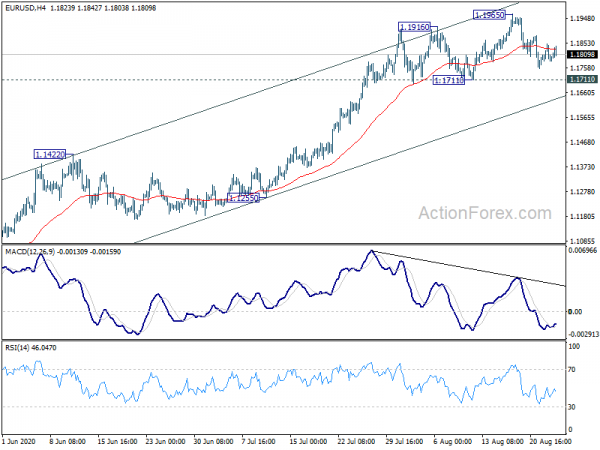 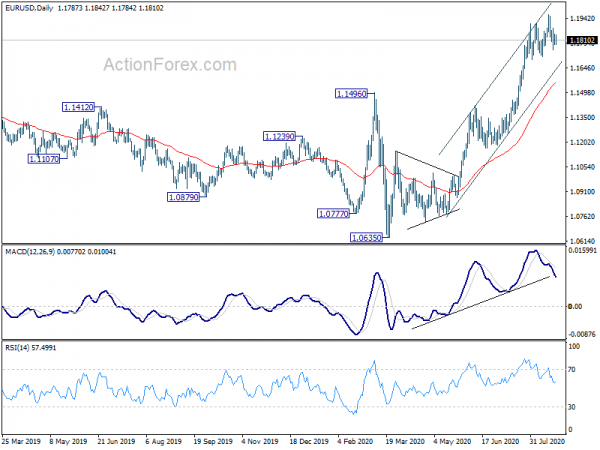