Yen is trading with an undertone today despite mixed risk markets. Treasury yield is a factor weighing on Yen again, with US 10-year yield staying firm around 0.73 handle. Germany 10-year is also back above -0.4% handle. US stocks open slightly lower, following mild weakness in Europe, but that’s just a mild retreat. Euro and Canadian Dollar are the relatively stronger ones for now. Dollar is mixed as the recovery attempt is relatively short-lived. Aussie is also mixed, awaiting tomorrow’s RBA guidance.

Technically, EUR/USD is now close to 1.1965 resistance, break there will resume larger rise from 1.0635. We’ll see if that would drag down the greenback elsewhere. But at this point, it looks like Euro buying is the main driving force with EUR/JPY also close to 126.75 resistance. EUR/GBP also recovers with eyes on 0.8974 minor resistance.

Fed Vice Chair Richard Clarida explained in a speech that if monetary policy “seeks only to return inflation to 2 percent”, the policy will tend to generate inflation that averages less than 2%. That would in turn “tend to put persistent downward pressure on inflation expectations”.

To “achieve symmetric outcomes for inflation requires an asymmetric monetary policy reactions  reaction function in a low r* world with binding ELB constraints in economic downturns,” he added. Hence, FOMC will no longer refers to 2% inflation goal as “symmetric”, but “averages 2% over time”.

He also said said forward guidance and large-scale asset purchases “have been and continue to be effective” with federal funds rate at effective lower bound. He reiterated that “we do not see negative rates as an attractive policy option”. Yield caps and targets were “not warranted” in the current environment.

In an interview with Reuters, ECB  Executive Board Member Isabel Schnabel, said Eurozone’s Q2 GDP contraction of -12.1% qoq was “very large” but “close to our projection of -13%”. Incoming data also “by and large” support the baseline of June projections. She believed that the economic is close to the baseline with a “strong rebound” in Q3, and there will be a “protracted recovery”.

Despite recent resurgence of infections, “it looks unlikely that we are going to see a full lockdown again”, she added. And this is “precisely what we assumed in our baseline scenario”. As long as the baseline scenario remains intact, “there is no reason to adjust the monetary policy stance”.

According data from Japan’s Ministry of Economy, Trade and Industry, industrial production grew 8.0% mom in July, well above expectation of 5.0% mom. That’s also the quickest jump on record since 1978. Manufacturers are expect output to grow further by 4.0% mom in August, and further by 1.9% in September. However, METI expects output to remain below pre-pandemic level for some time. Over the year, production was down -16.1% yoy.

As Prime Minister Shinzo Abe is stepping down, it’s reported that the ruling LDP will vote on September 14 to select a new leader.

ANZ added, “The recent re-emergence of COVID-19 is disheartening, and has taken a real toll on businesses, particularly in Auckland. However, it appears that firms are looking through it to some extent, in that intentions and expectations saw relatively modest falls compared to the first half of the month.”

China PMI manufacturing edged down to 51.0 in Aug

Zhao Qinghe a senior statistician with the NBS noted, “demand continues to recover, and the supply-demand cycle is gradually improving” with new order index rising for the 4th month to 52.0. trade also improved with new export orders rising 0.7 to 49.1.

However, “some companies in Chongqing and Sichuan reported an impact from the heavy rains and floods, resulting in a prolonged procurement cycle for raw materials, reduced orders and a pullback in factory production.”

EUR/USD is still staying below 1.1965 resistance despite today’s rebound. Intraday bias remains neutral first. Further rise is in favor with 1.1711 support intact. Firm break of 1.1965 will resume larger rise from 1.0635. On the downside, though, break of 1.1711 support should confirm short term topping and turn bias back to the downside for correction. 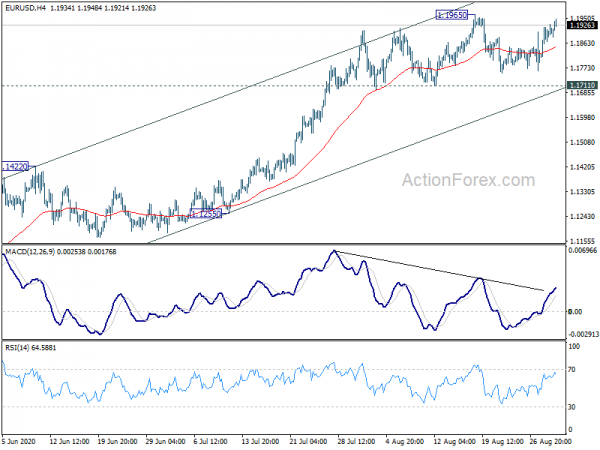 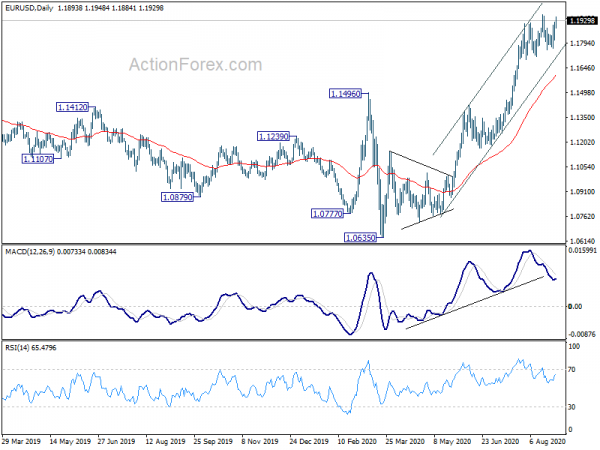